4 MIN READ – If you’re coming #BackInTheLoop for the first time since the start of the COVID-19 pandemic, here’s what’s new.

Chicago Loop Alliance’s award-winning Sundays on State event series will return with an expanded footprint for four select Sundays this summer when portions of Chicago’s most iconic street close to traffic for a free interactive block party! 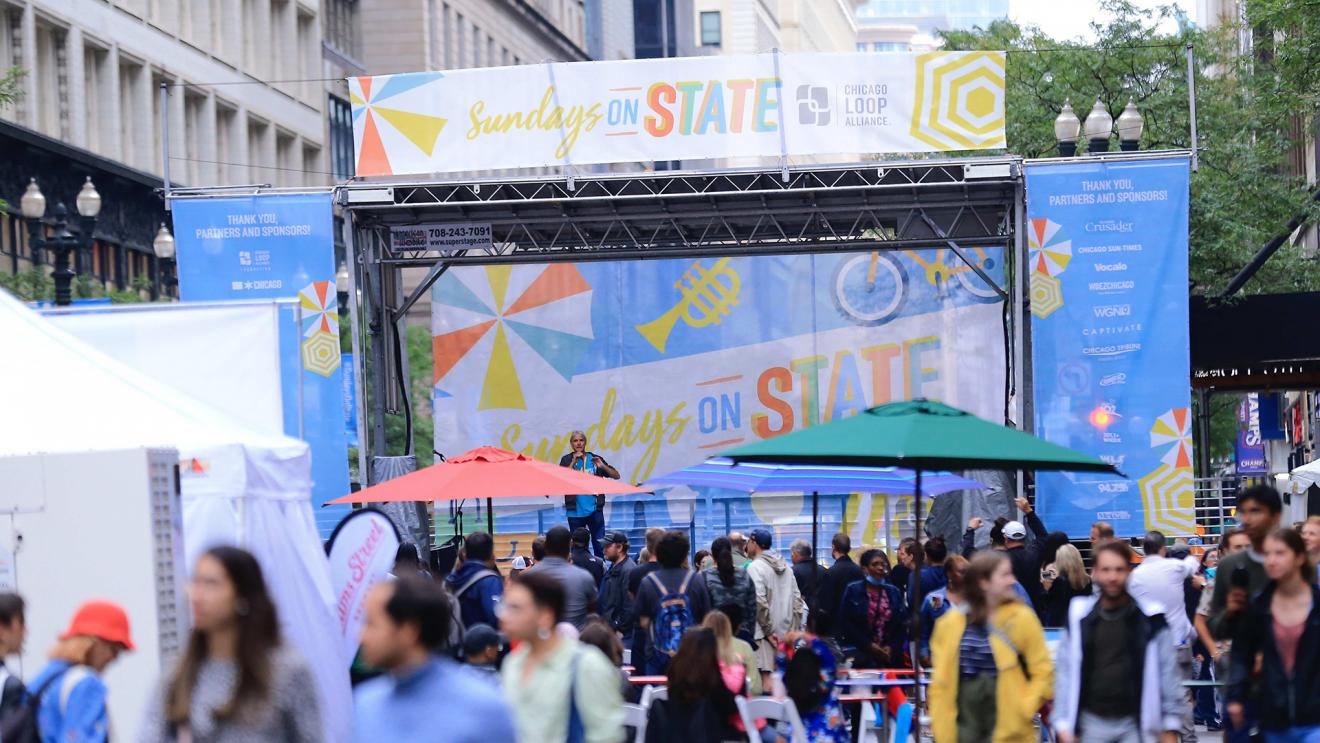 Royal Bee is now open at Block 37! Explore this unique and specially curated shop on Level 1 between Sephora and Banana Republic Factory. Royal Bee are the experts in everything bees and honey. When you shop at this zen space you'll find everything from skin care, soaps, gourmet honey, home decor, kitchen wear, candles, and gifts galore. The best part? Everything is inspired by or infused with the power of bees and the caring and healing strength of honey! 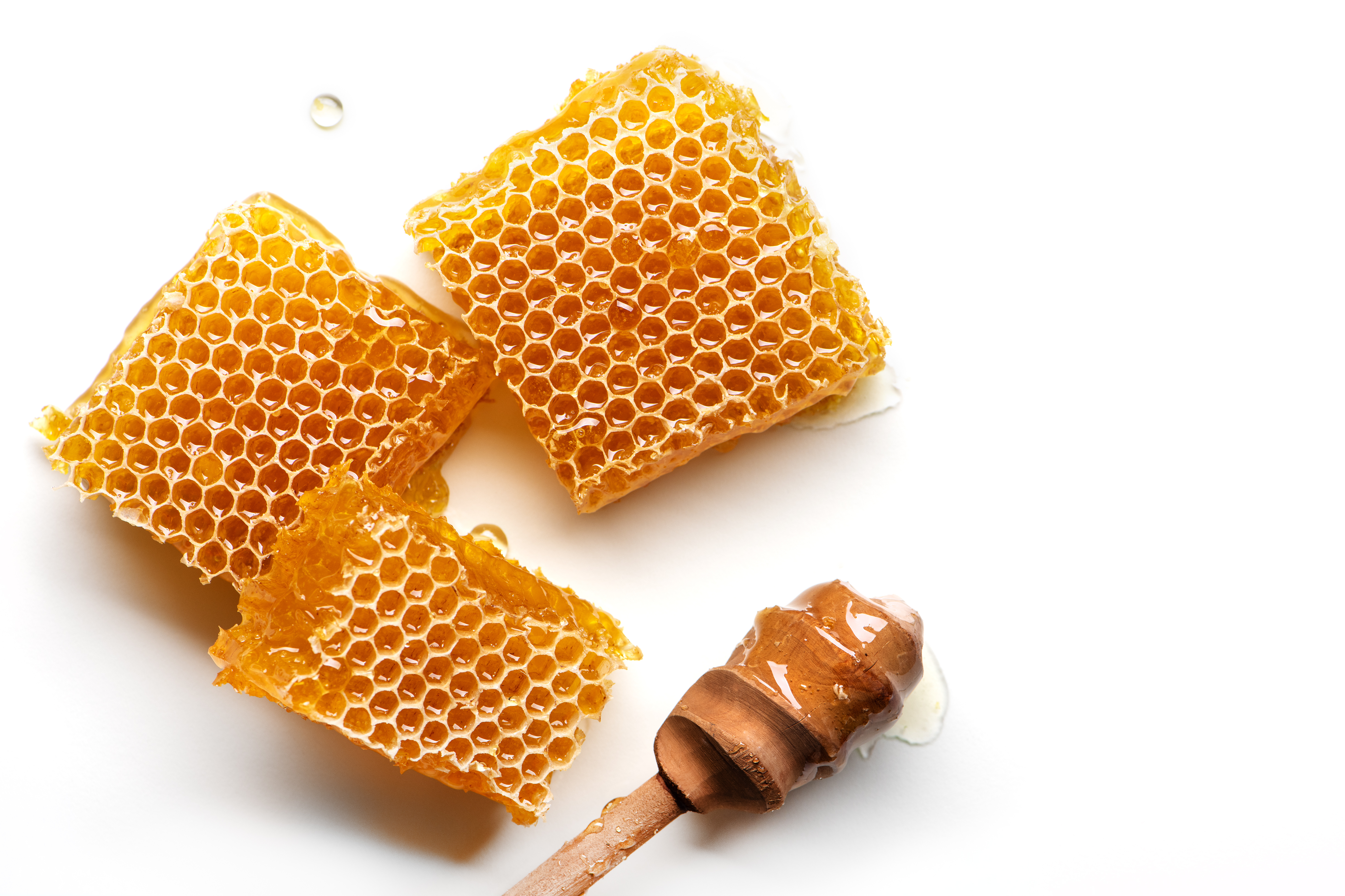 It was announced in late July by Google, Illinois Governor J.B. Pritzker, and Chicago Mayor Lori Lightfoot that Google will purchase and renovate the legendary Thompson Center into new offices for the tech giant's employees. The cost of the existing unrenovated building is $105 million and Google anticipates occupying the Thompson Center starting in 2026. 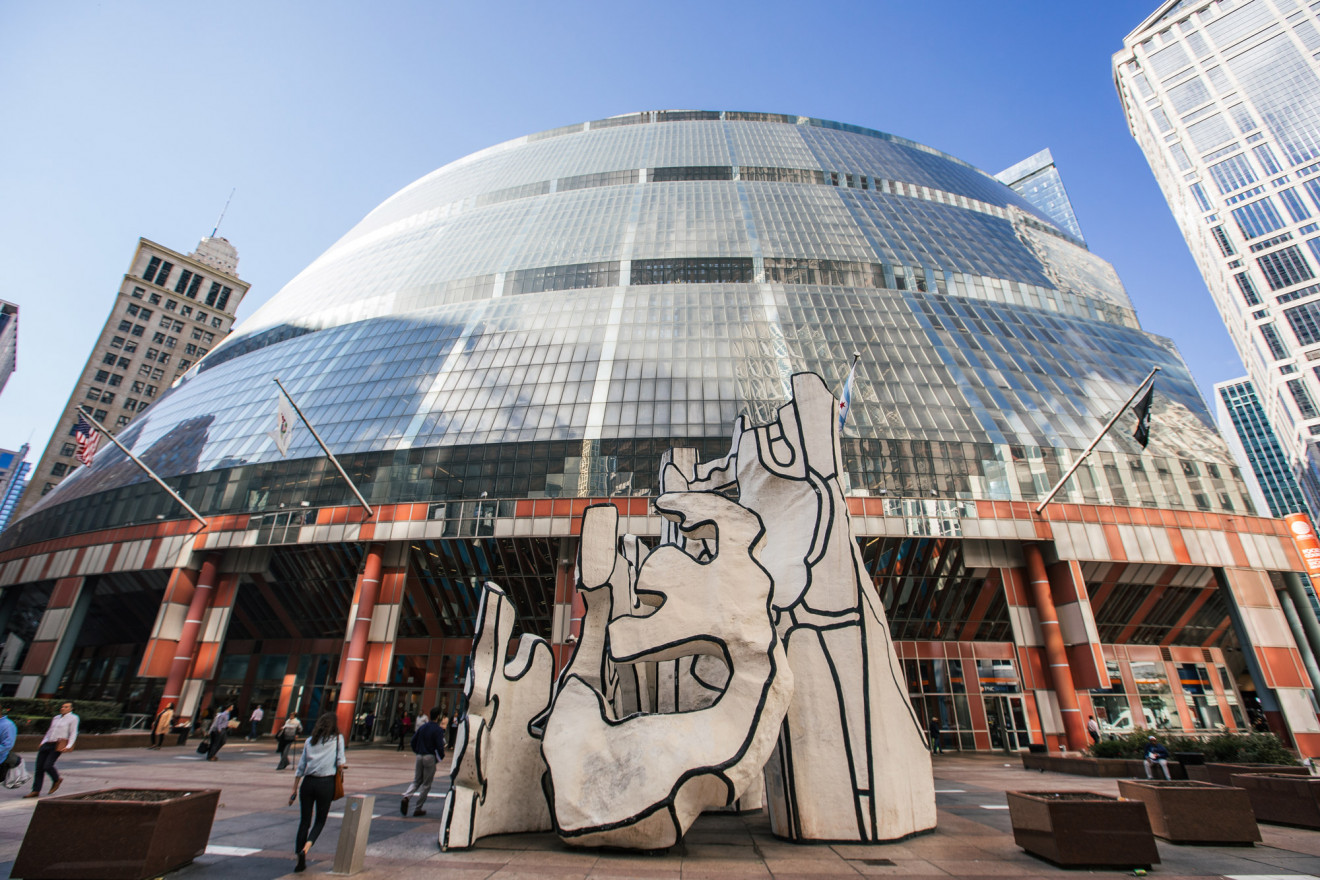 In early April 2022, Macy's Backstage store opened to the public at the State Street flagship location. Backstage is a store-within-store experience offering shoppers a constantly changing assortment of on-trend, off-price finds. Check it out when you're in the mood for a State Street shopping spree. 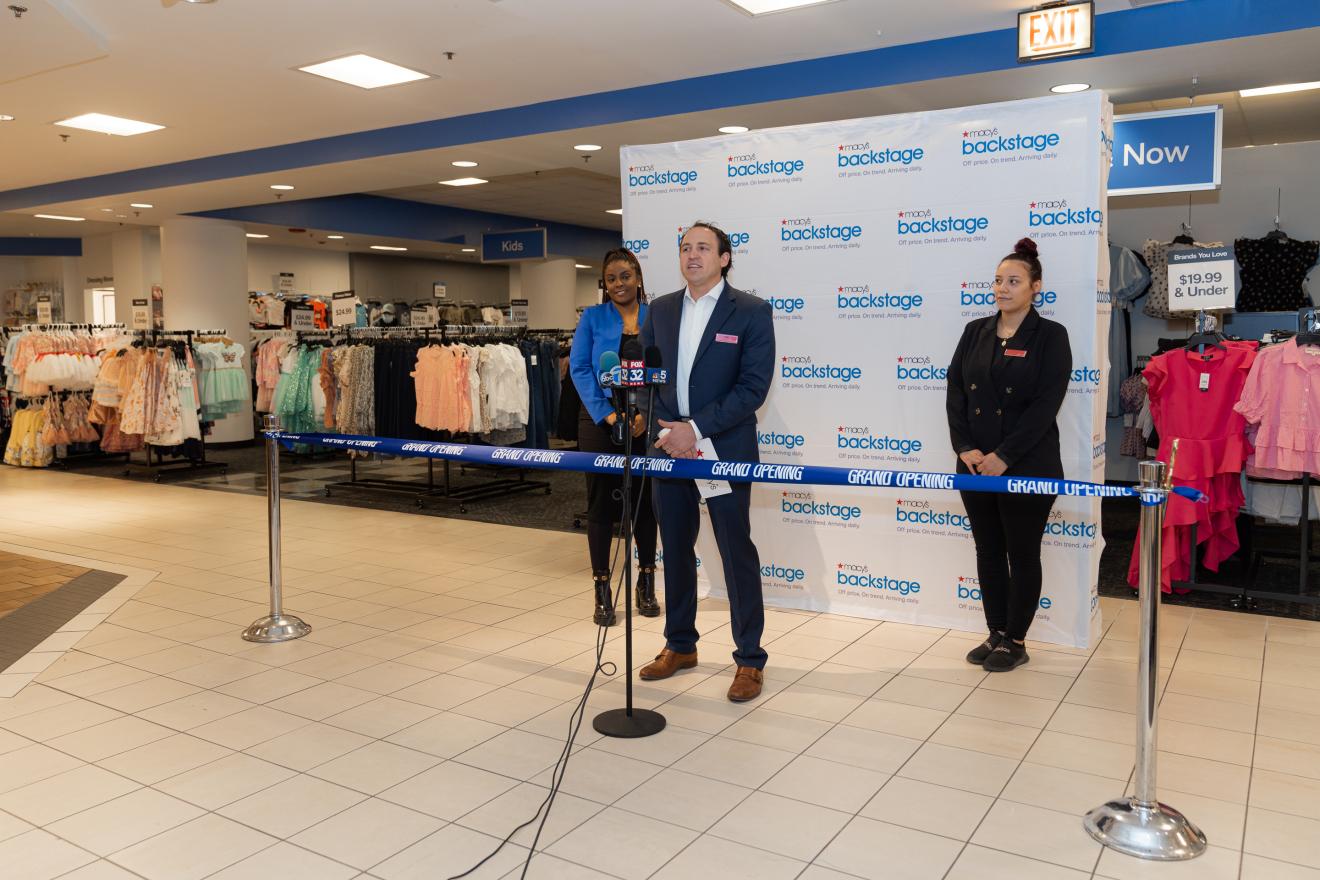 Mindworks, the one-of-a-kind behavioral science discovery center where visitors can take part in hands-on research, earn prizes, and learn new insights about themselves and others, opened it's Michigan Avenue location in the summer of 2021. 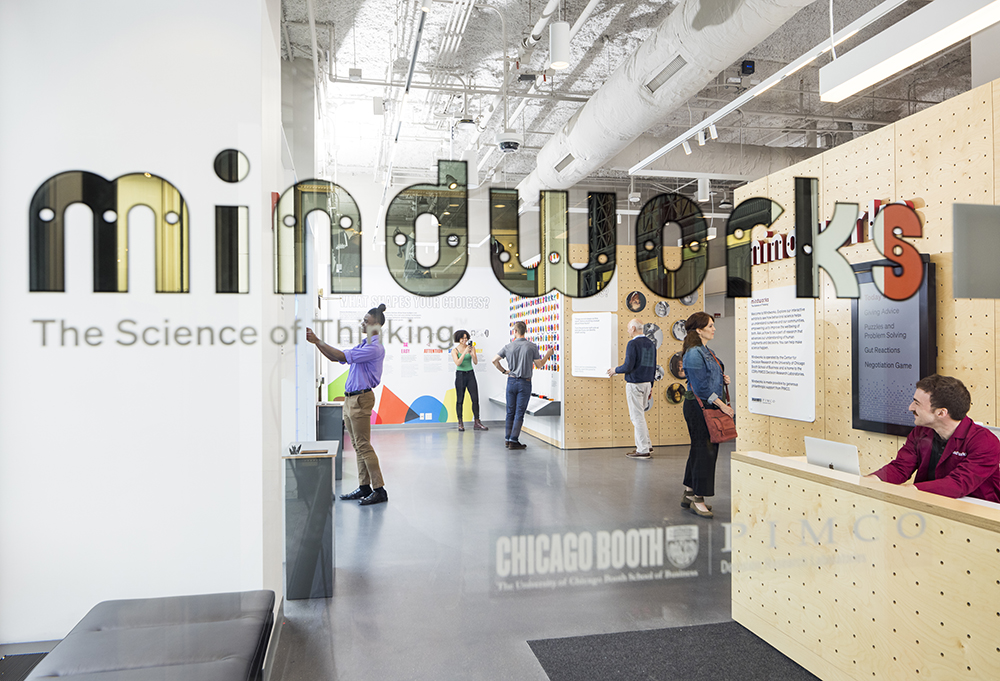 THEATRE IN THE lOOP

Theatre is #BackInTheLoop! From dazzling marquees, to performances in the park, to edgy and intimate stages, the Loop is home to a wide variety of world-class theatre. Whether you're looking for musicals, plays, dance, classical music, or even acrobatics, you'll find it right here in the heart of downtown and everyone's neighborhood—the Loop. Learn what the theatre community's plans are for the 2022-23 season here. 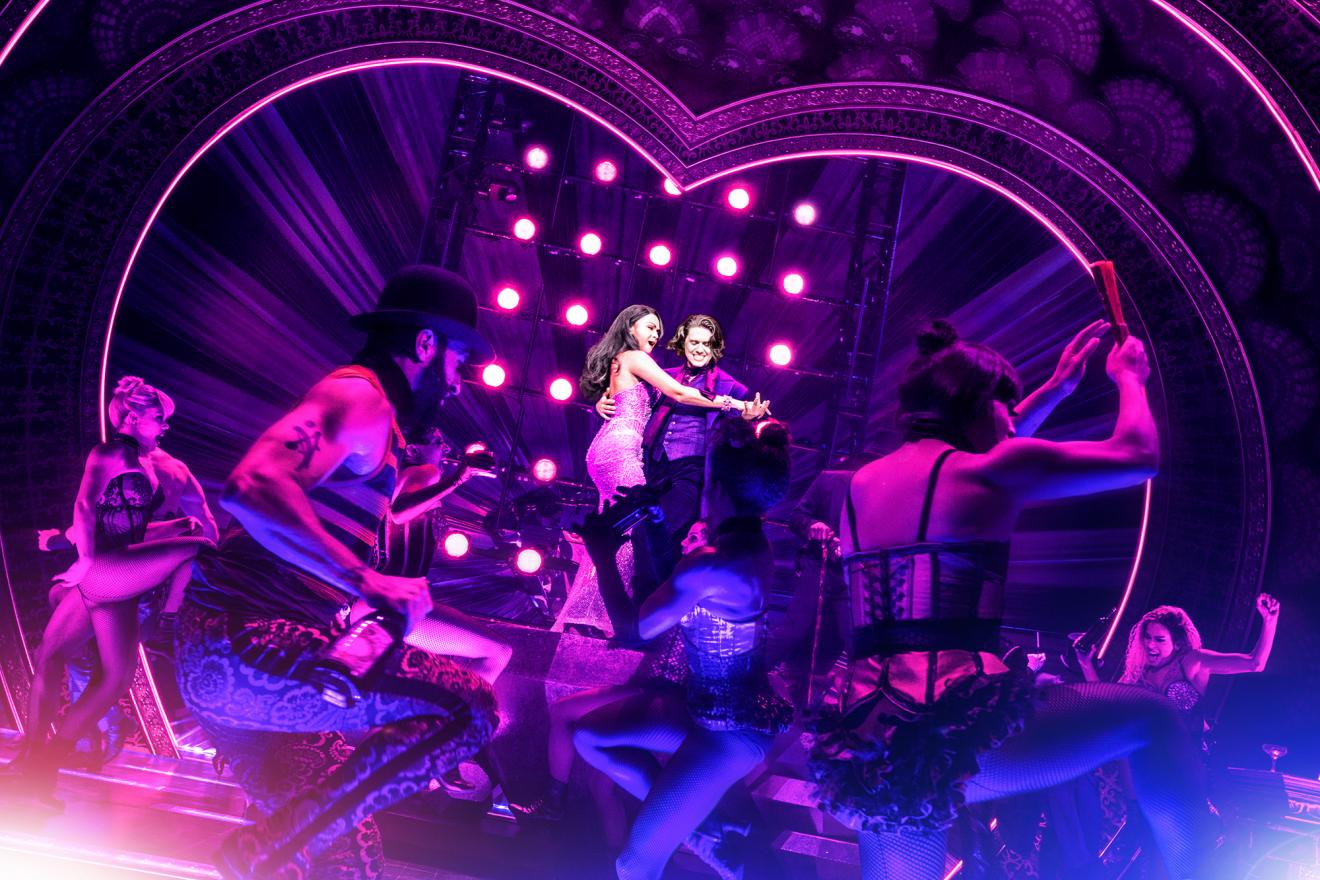 The largest Medieval Torture Museum in the U.S. is now open on State Street in the Chicago Loop. The "Medieval Torture Collection" reminds us just how much suffering humanity can inflict in the name of cause and justice when the right tools are placed in the hands of fanatics, madmen, and tyrants. 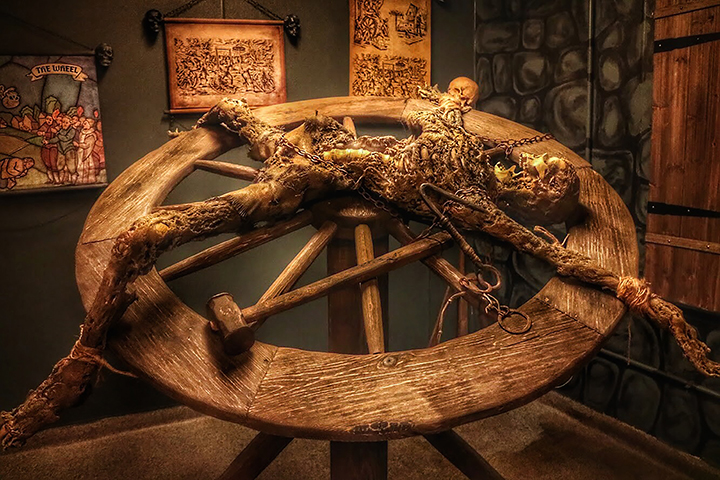 The first Primark store in the Midwest at 35 N. State St., a space last occupied by Gap, opened in March 2021. 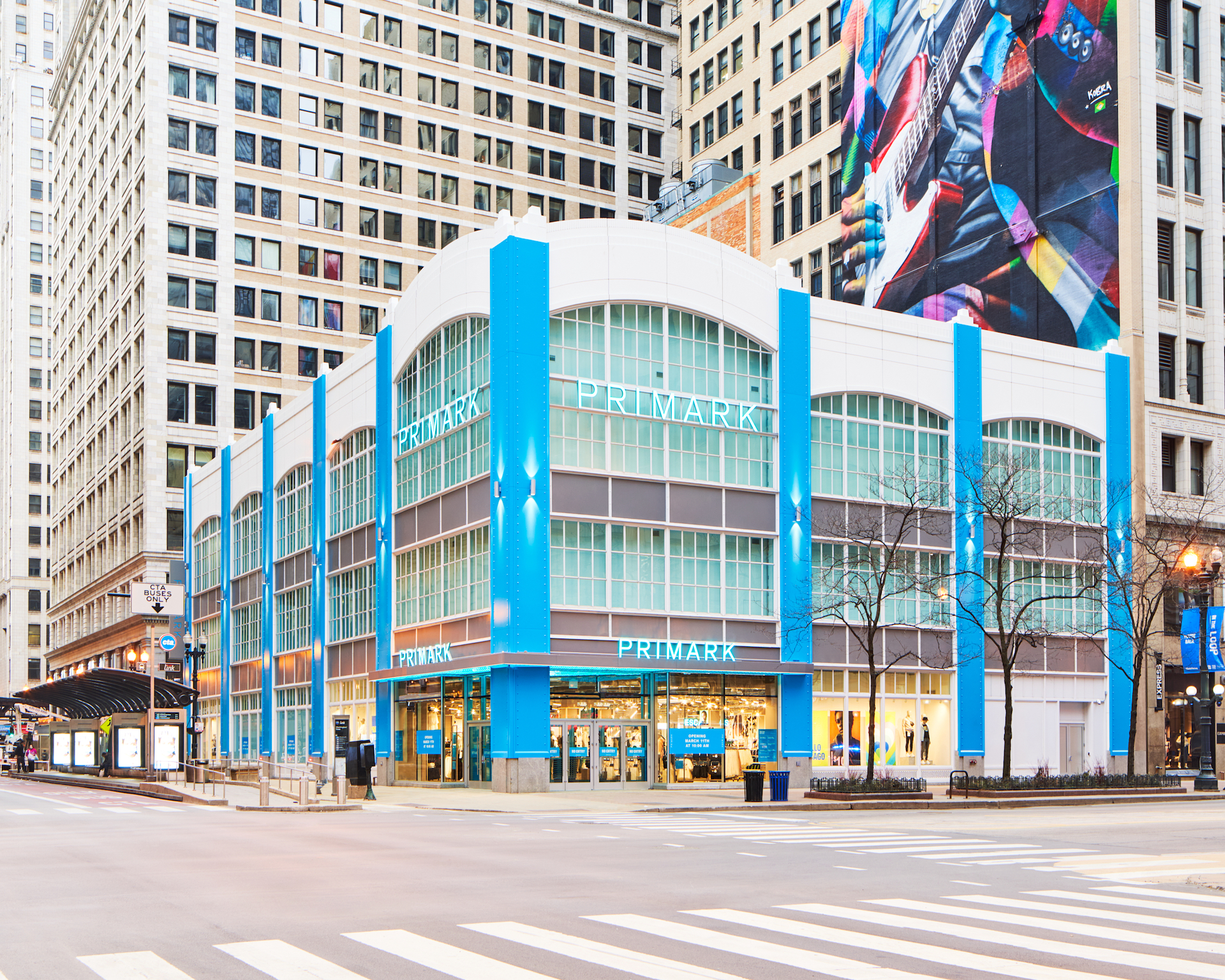 SCHOOL OF THE ART INSTITUTE OF CHICAGO

The School of the Art Institute of Chicago's new 60,000-square-foot art gallery, graduate studio, and office space has opened at 33 E. Washington St. The gallery will showcase the artwork of students, faculty, and visiting artists, while the art studios will provide work space for graduate students enrolled in the School. 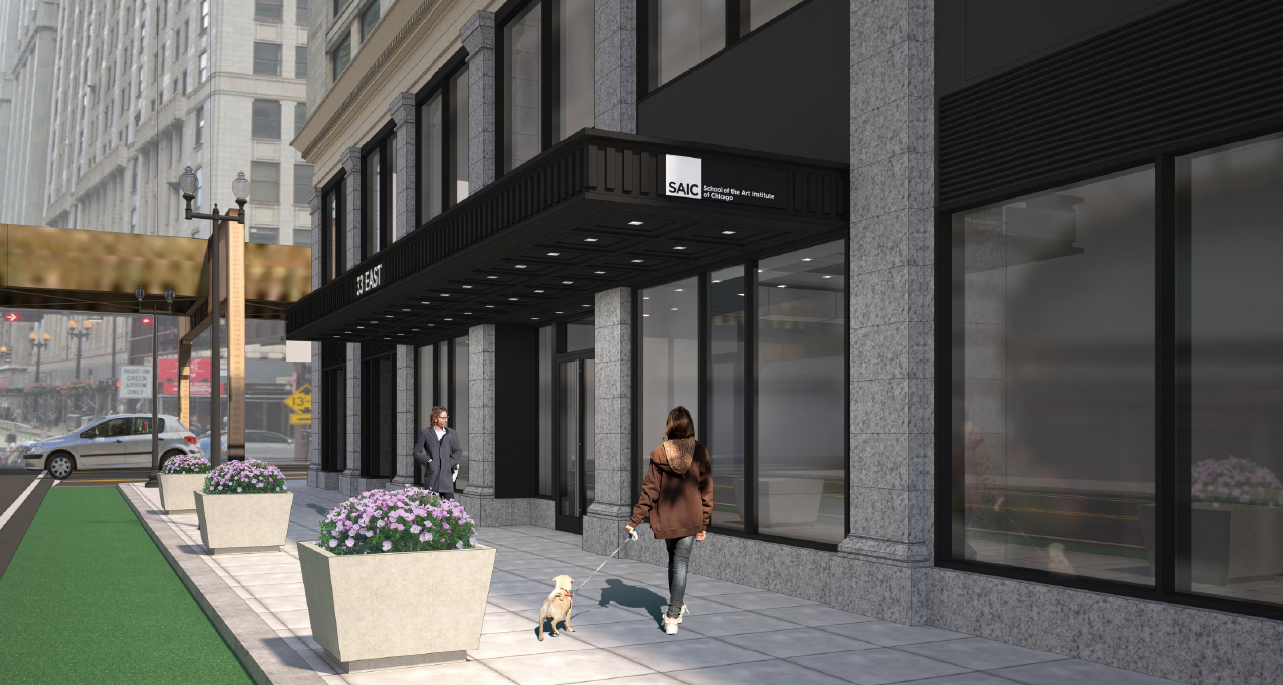 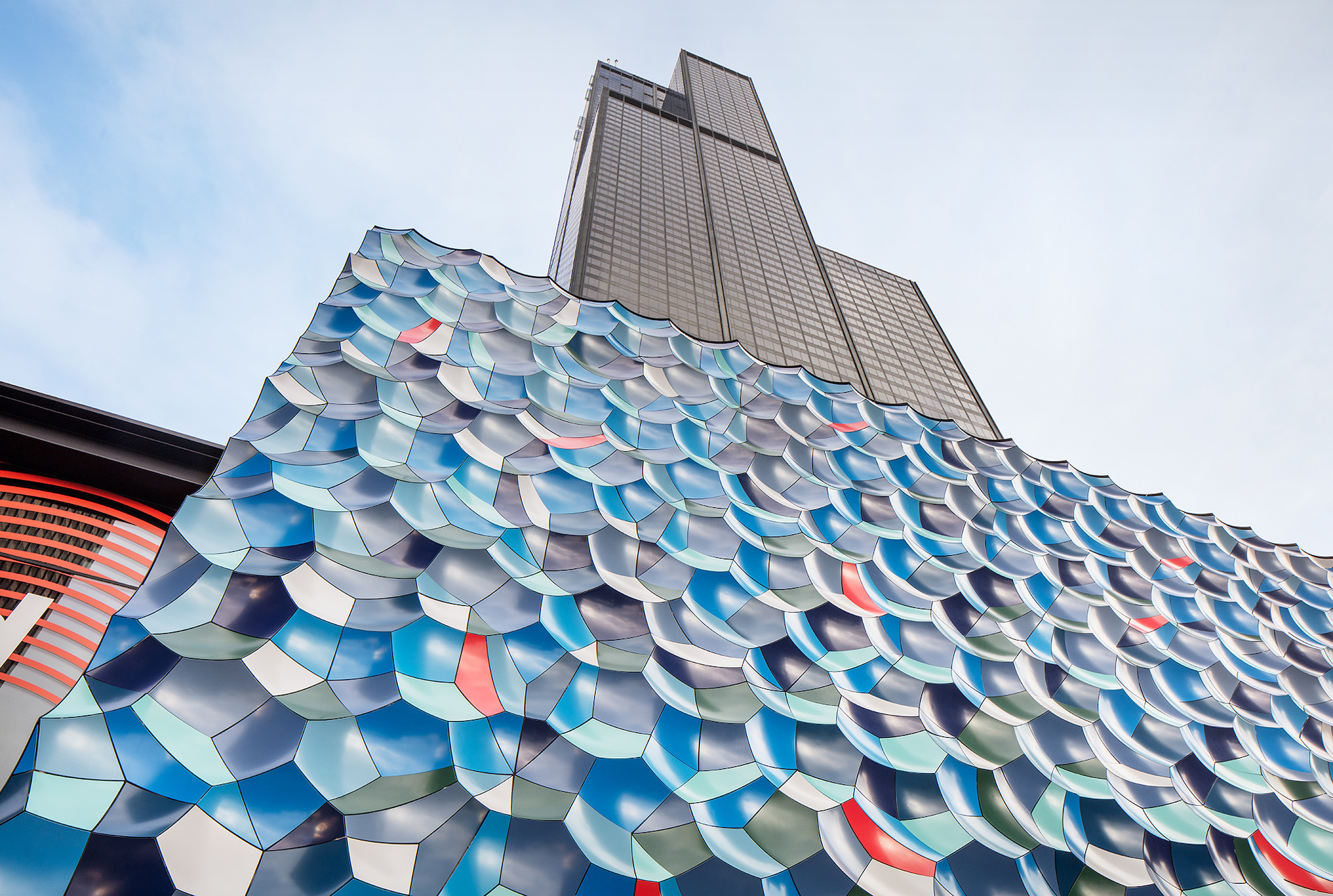 Designed to amuse, amaze and stimulate the senses, the Museum of Illusions features more than 80 unique visual and educational installations appealing to locals and tourists of all ages. It is located at 25 W. Washington St. 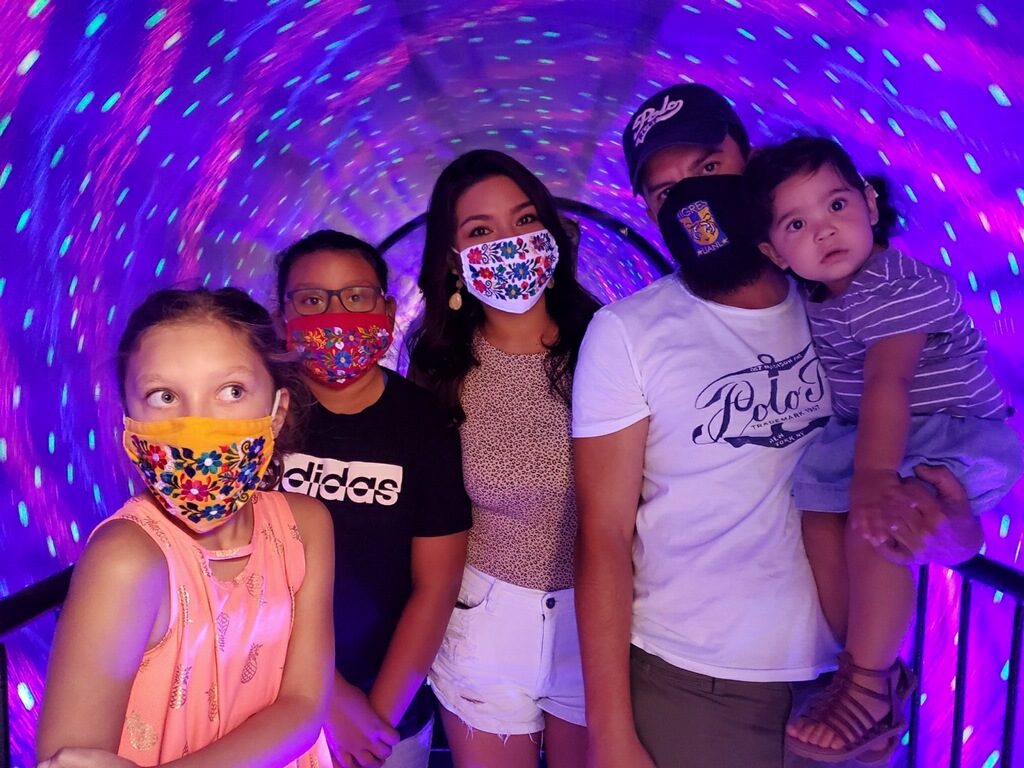 Urbanspace opened the first of its two long-awaited Chicago food halls in September 2021, after being on hold for more than a year due to the COVID-19 pandemic. The 12,000-square-foot food hall at 15 W. Washington features 15 vendor booths offering a diverse and eclectic array of food and drink selections. 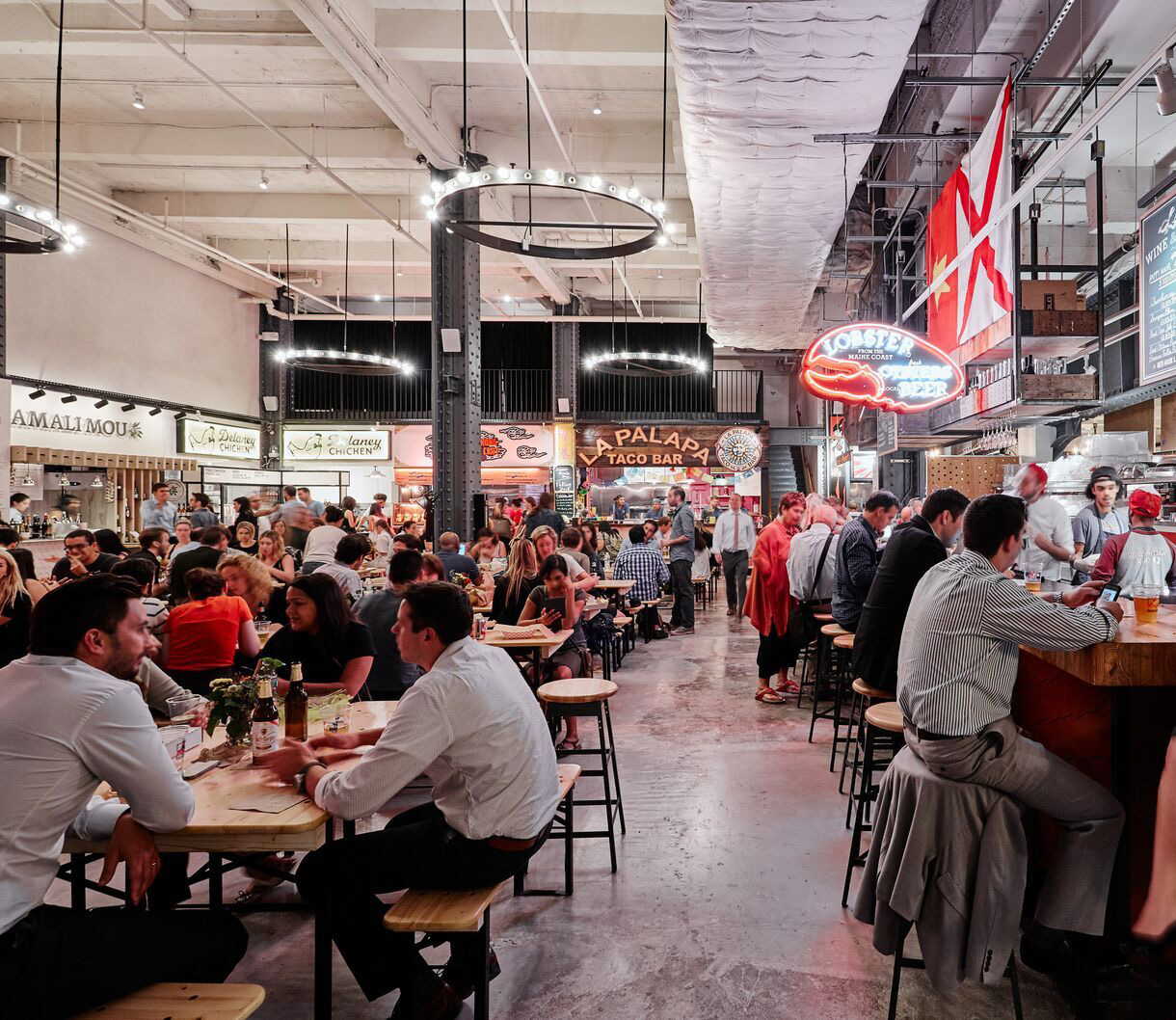 What was the St. Jane Hotel and the Hard Rock Hotel before that is now Pendry Chicago, and the new hotel restaurant is the stylish and modern French spot Venteux. Through a unique dining experience crafted with passion and precision by the Michelin Star earning and Chicago-native Chef Donald Young, guests are transported to the bustling brasseries that define the Parisian lifestyle. You'll find all the iconic French cuisine—steak frites, whole roasted duck, oysters flown in from the coast daily—but also encounter unique flavors, get to know their take on escargot, and rethink your idea of classic French onion soup. 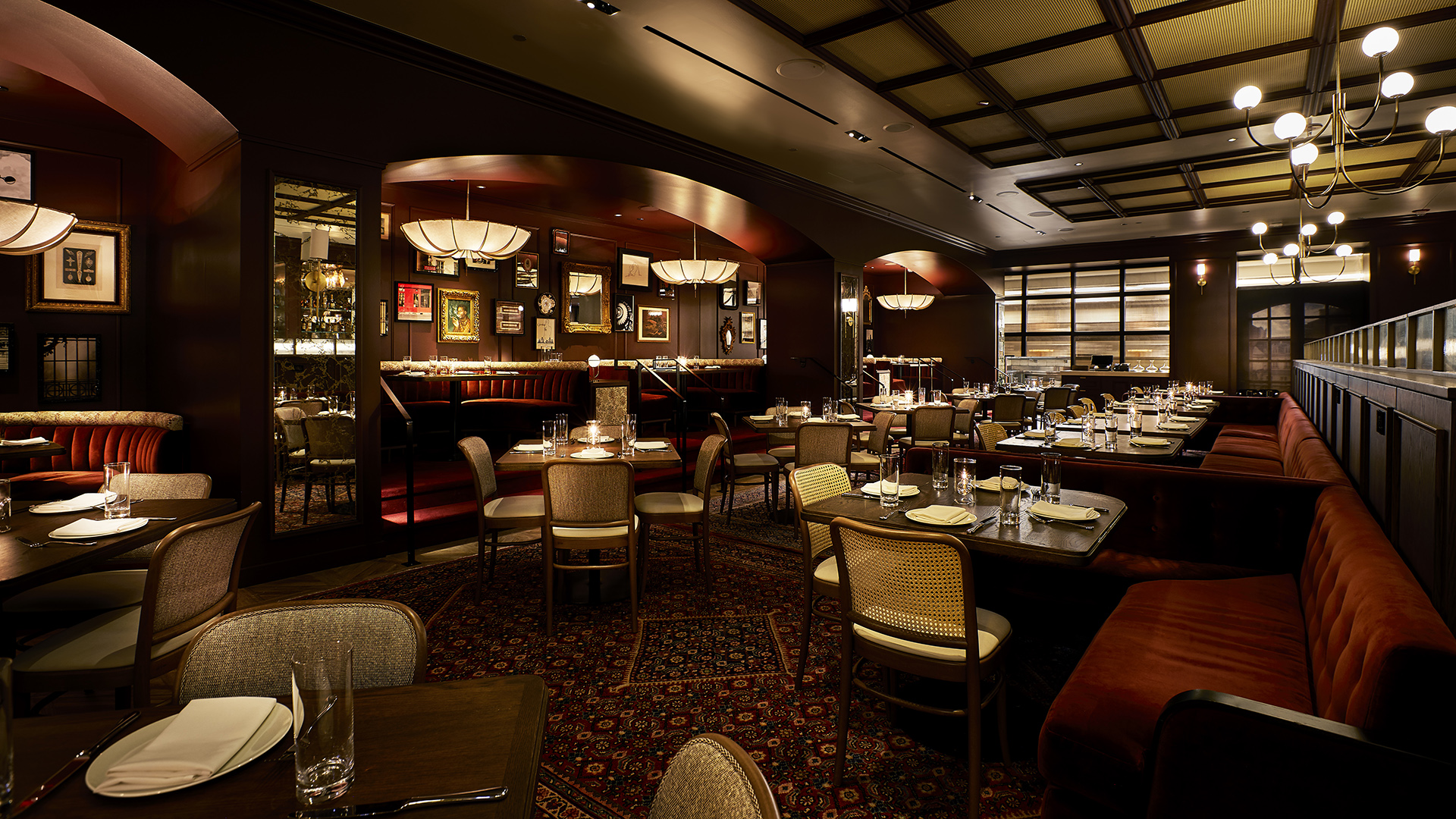 Other recent openings include Big City Optical and a fourth location of Goddess and the Baker, at 181 W. Madison. Russian Tea Time's remodel is now complete, and they are now open for delivery, takeout, and dine-in. Petterino's, a staple of the Theatre District, reopened in October 2021 with a new concept and under new ownership. 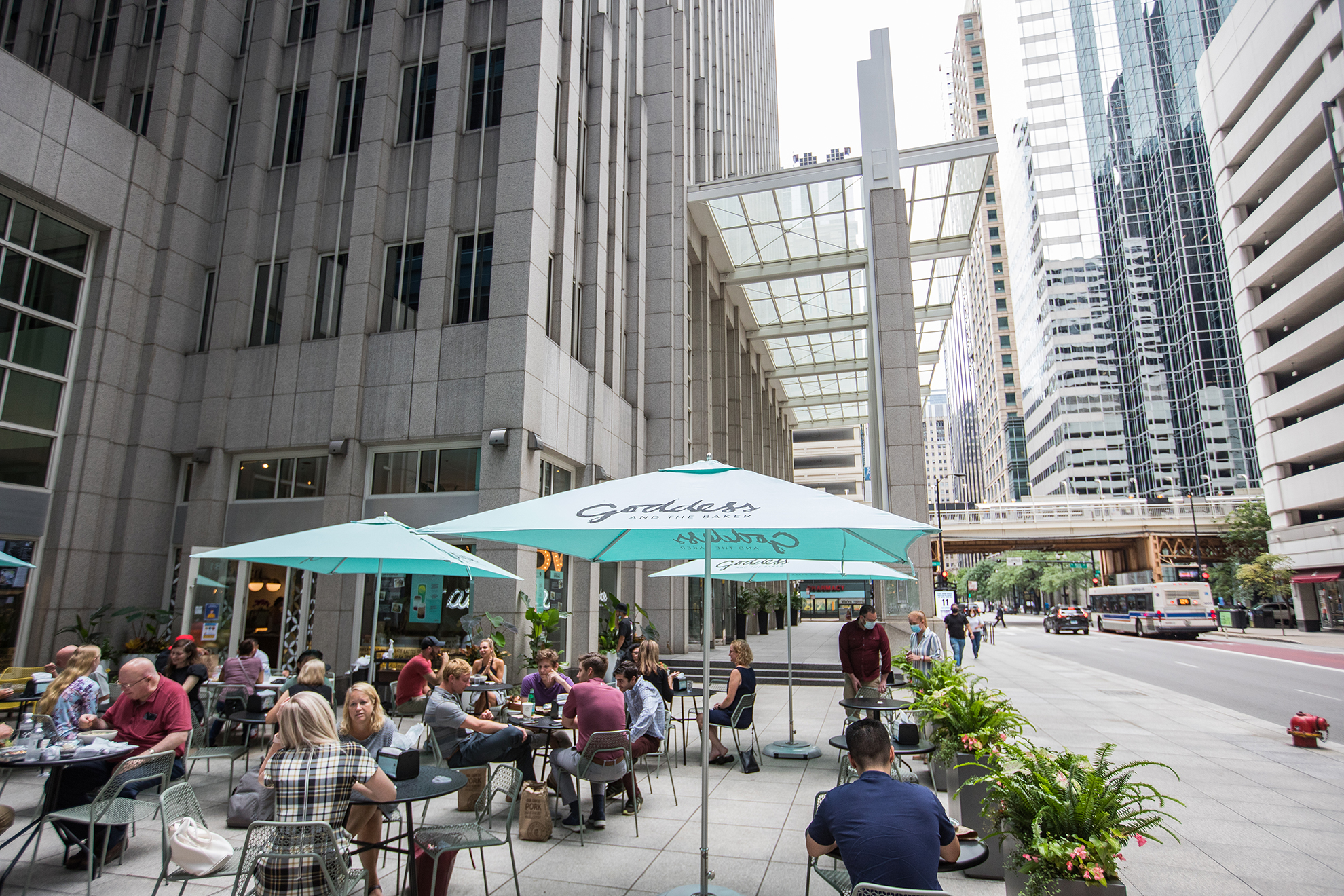 Embark on a free downtown adventure through alleys and other off-the-beaten-path locations on this self-guided Loop Mural Walk. Explore 21 murals by local and international artists depicting the history and culture of Chicago. Check out the tour here. 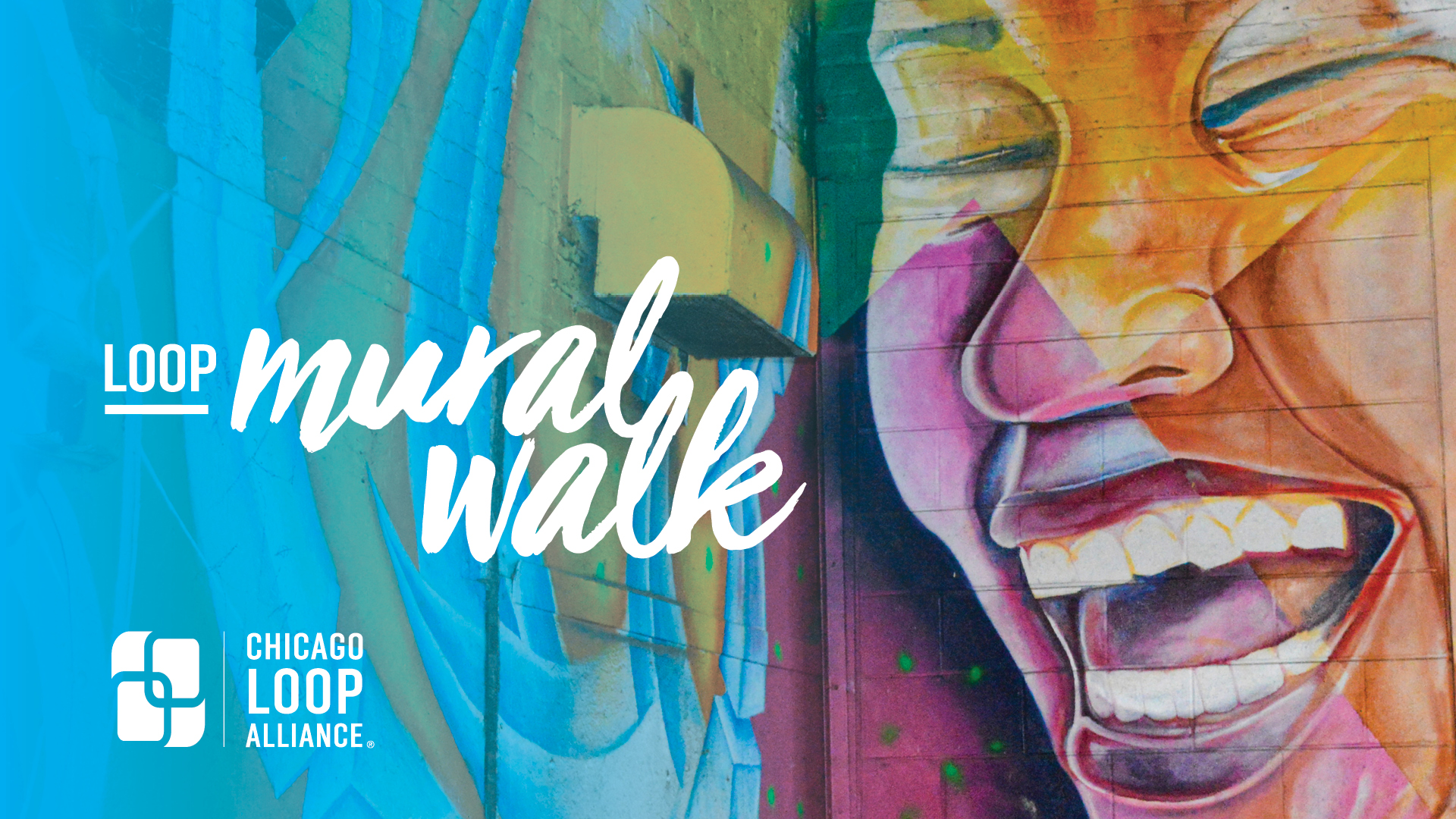 Chicago Loop Alliance’s Street Ambassadors provide clean and safe services to State Street seven days a week. During COVID-19, these ambassadors have increased their cleaning efforts with an emphasis on disinfecting any touch points at the street level, including bike racks, garbage cans, door handles, etc. In February 2022, Chicago Loop Alliance announced that in addition to State Street, the ambassadors will provide a visible presence on key east and west streets, to welcome workers and visitors coming to the Loop on Metra. The expansion of the ambassador program, contracted by Chicago Loop Alliance through Streetplus, a national business improvement district service, was made possible through a partnership with World Business Chicago to help facilitate a positive return to the Loop. 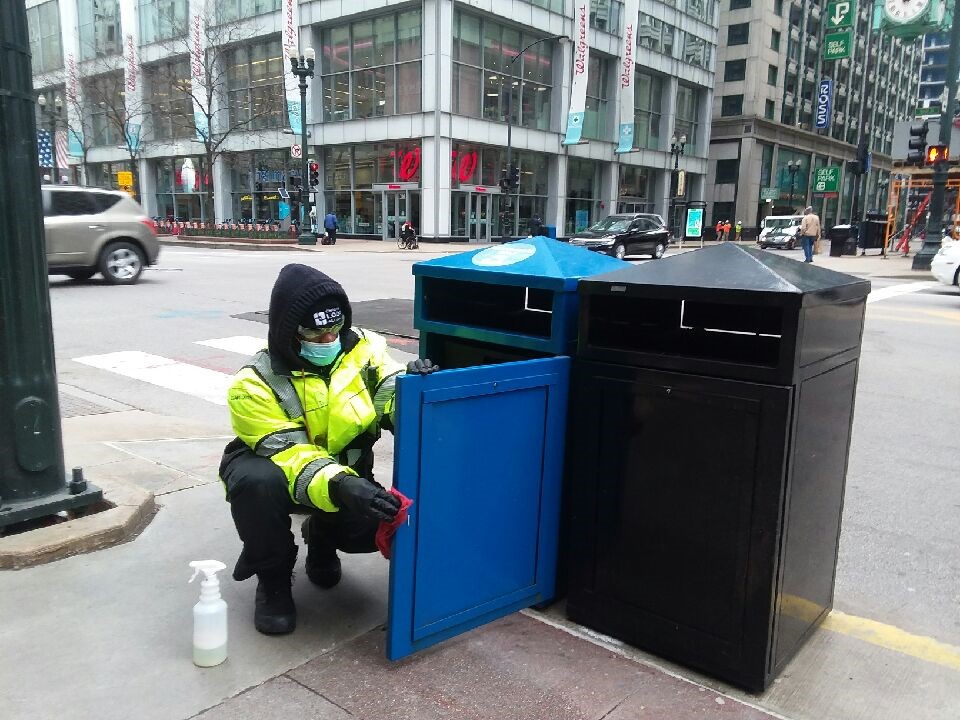 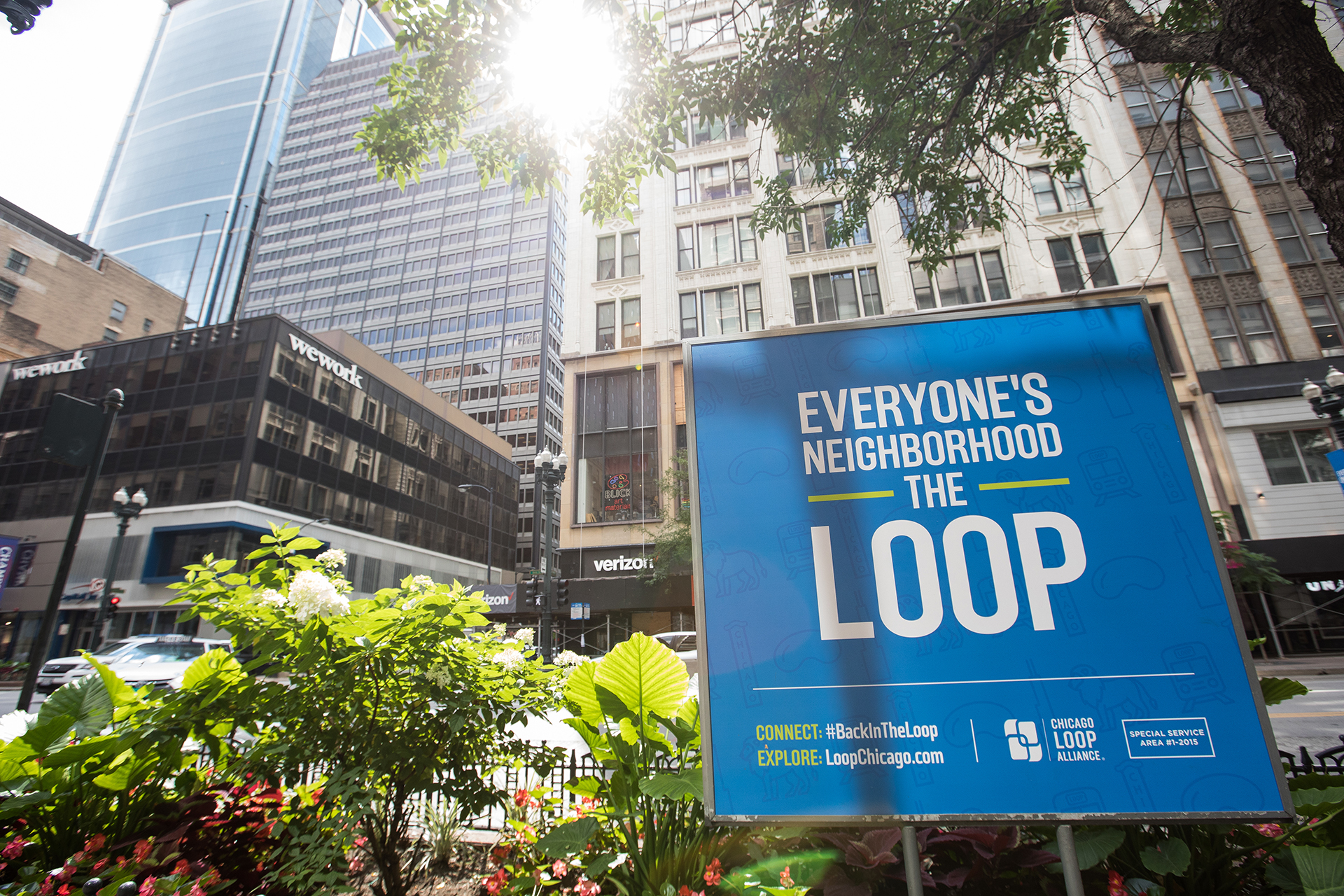 Chicago Loop Alliance commissioned a mural by Dwight White at Ida B. Wells Drive and Dearborn Street honoring the first year's worth of winners of their Loop Employee of the Month program. The mural is meant to be a gift to the Loop workforce as a whole. 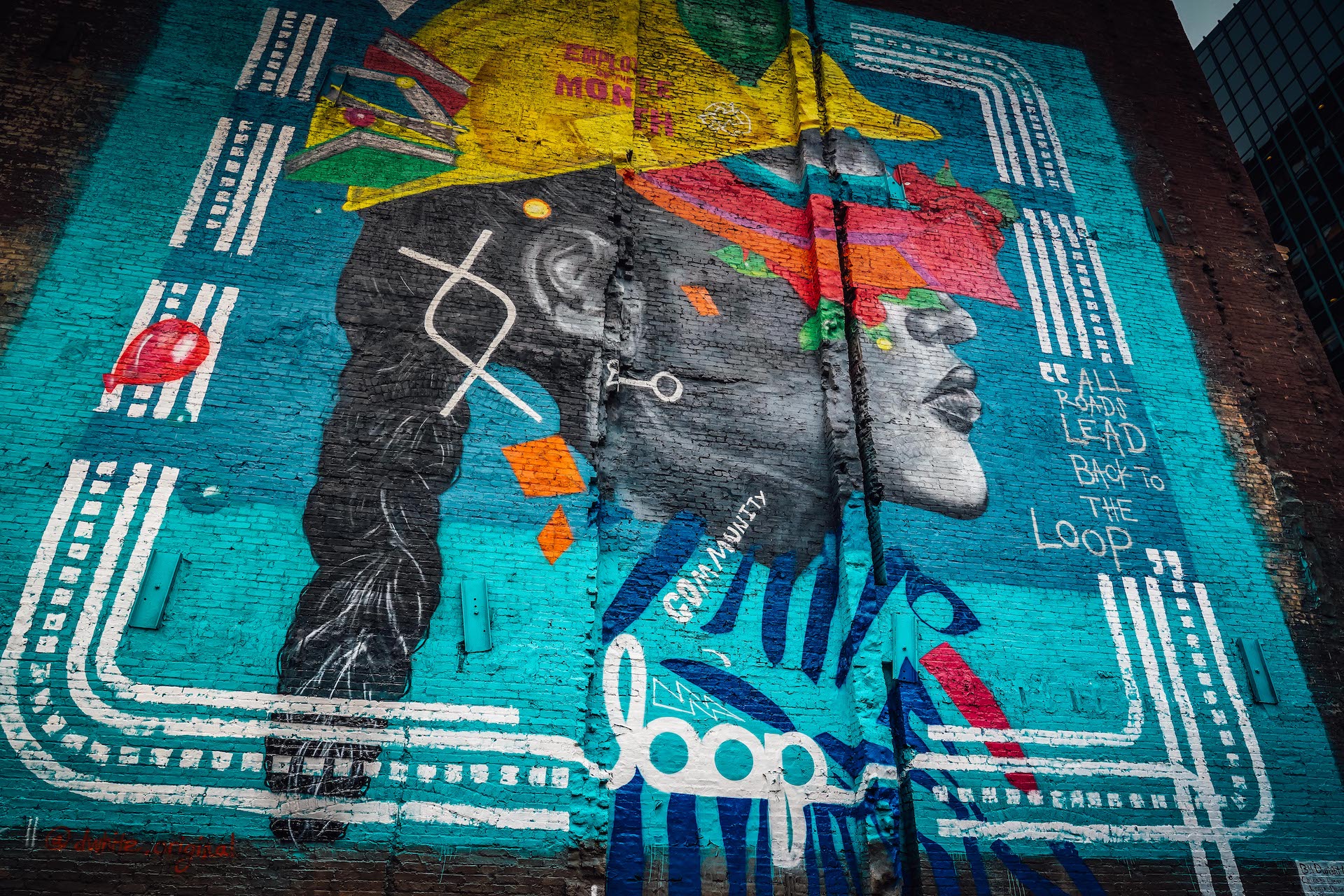 In an effort to create a more beautiful pedestrian experience, Chicago Loop Alliance hired Barrett Keithley and Dana Todd Pope and curator Missy Perkins to create a vibrant and positive mural in the Pedway called "Everyone's Neighborhood." The artists created visual representations of Chicago Loop Alliance’s “Everyone’s Neighborhood” project, which seeks to promote inclusion and representation in the Loop. 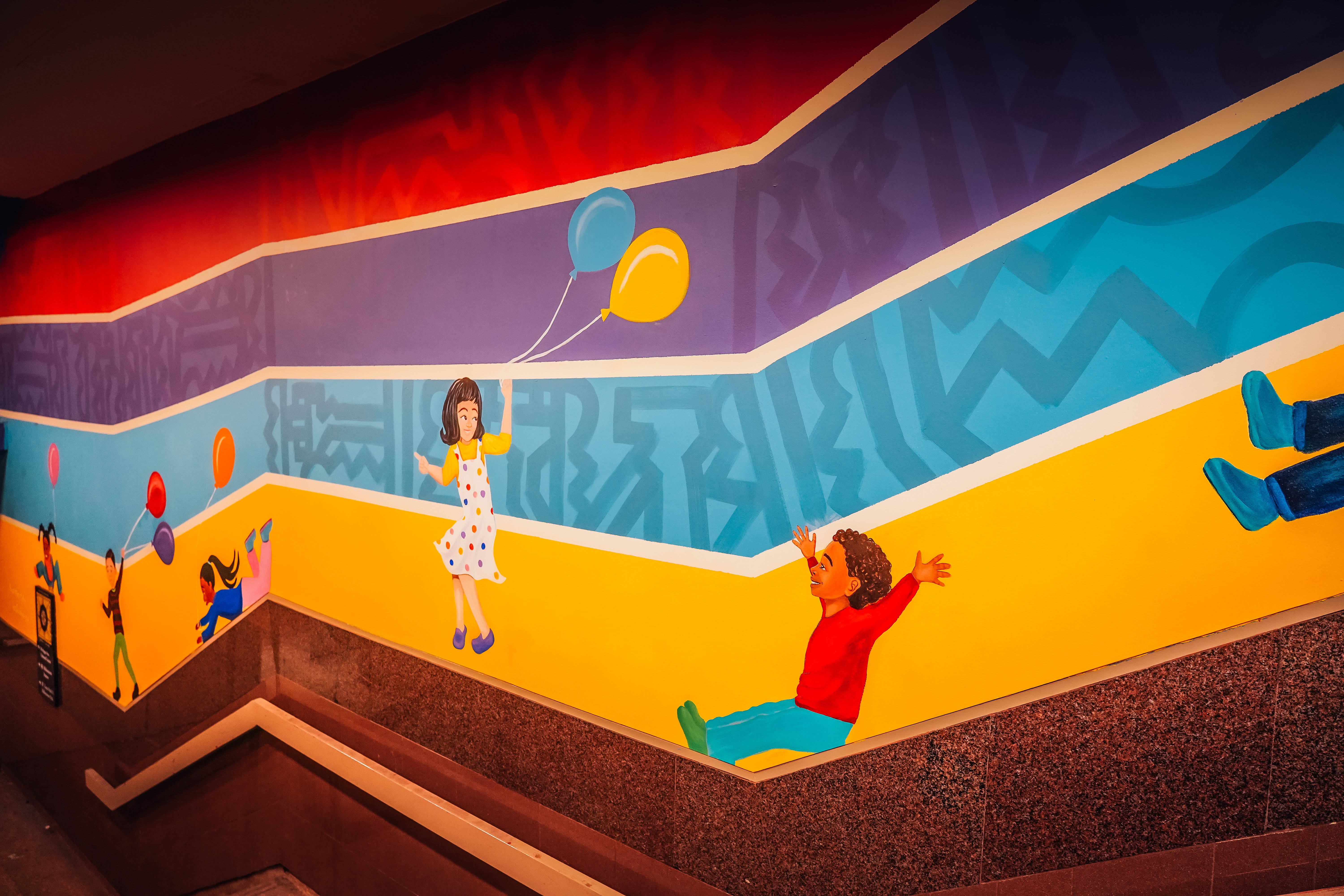 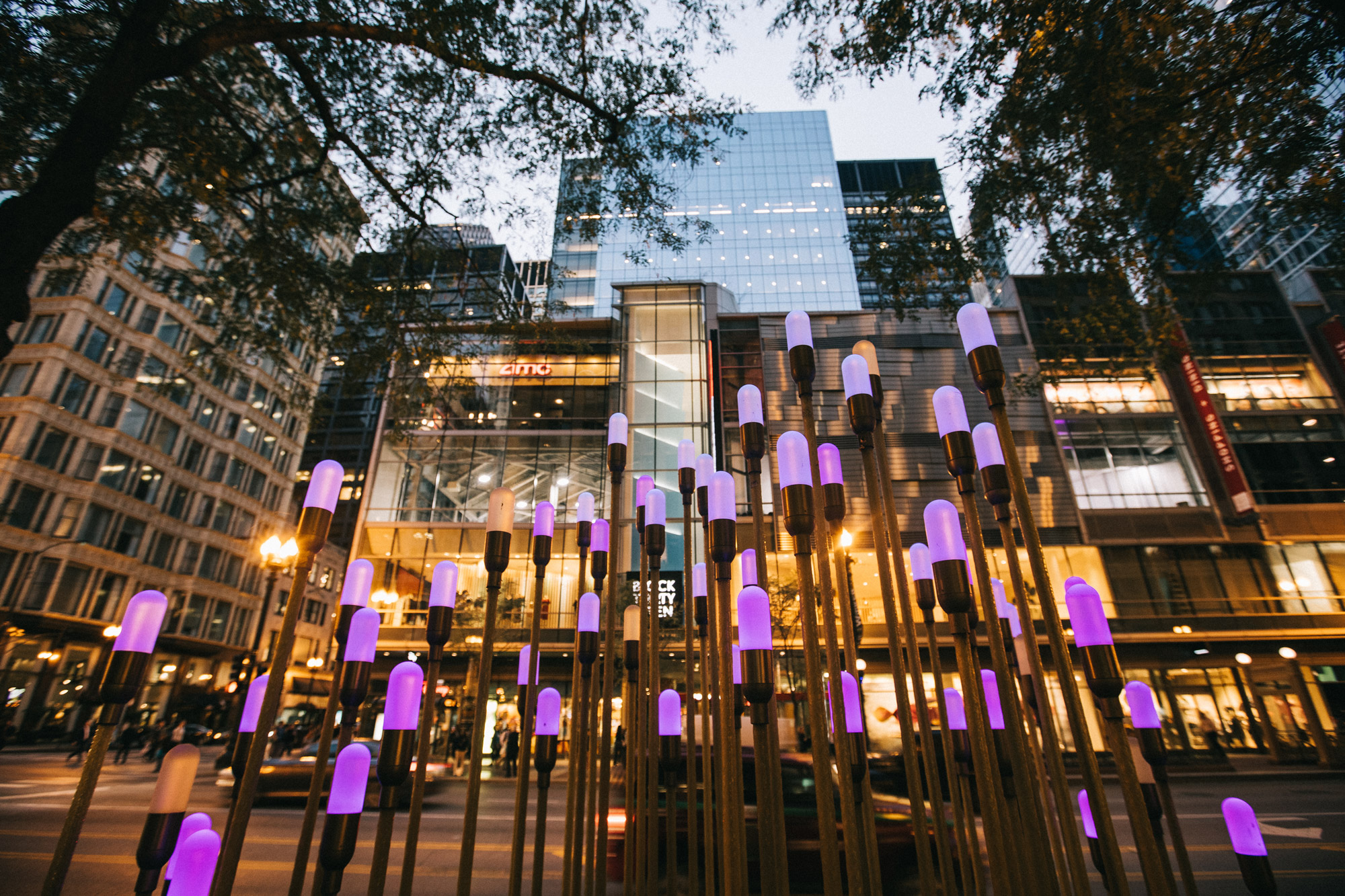 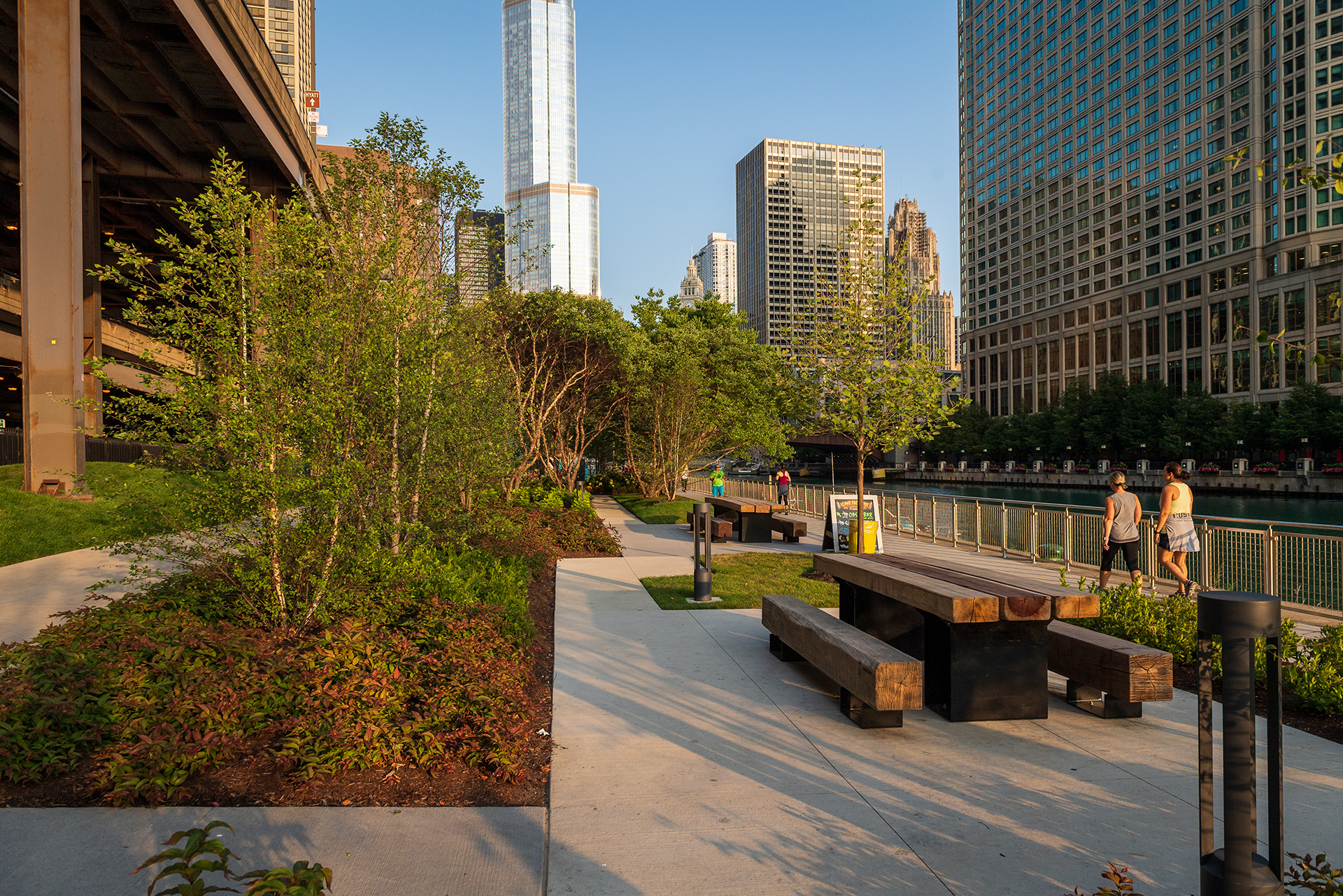 Parkline Chicago was under construction at Randolph and Wabash as the pandemic struck. It is now open and offering condos and luxury apartments. 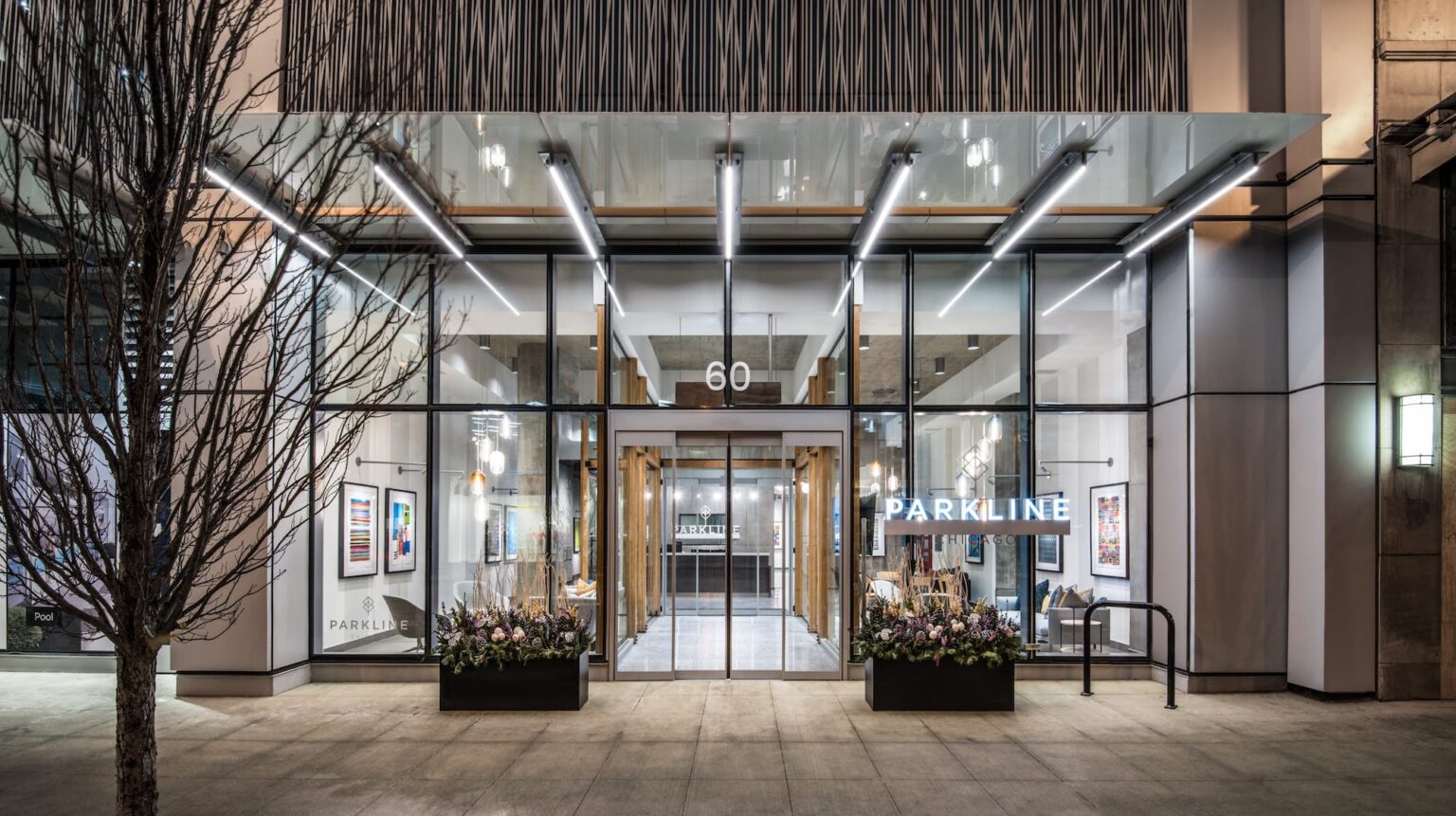 City Club Apartments at 63 E. Lake St., a new apartment development next to Parkline Chicago, was under construction when the pandemic struck. It is now leasing. 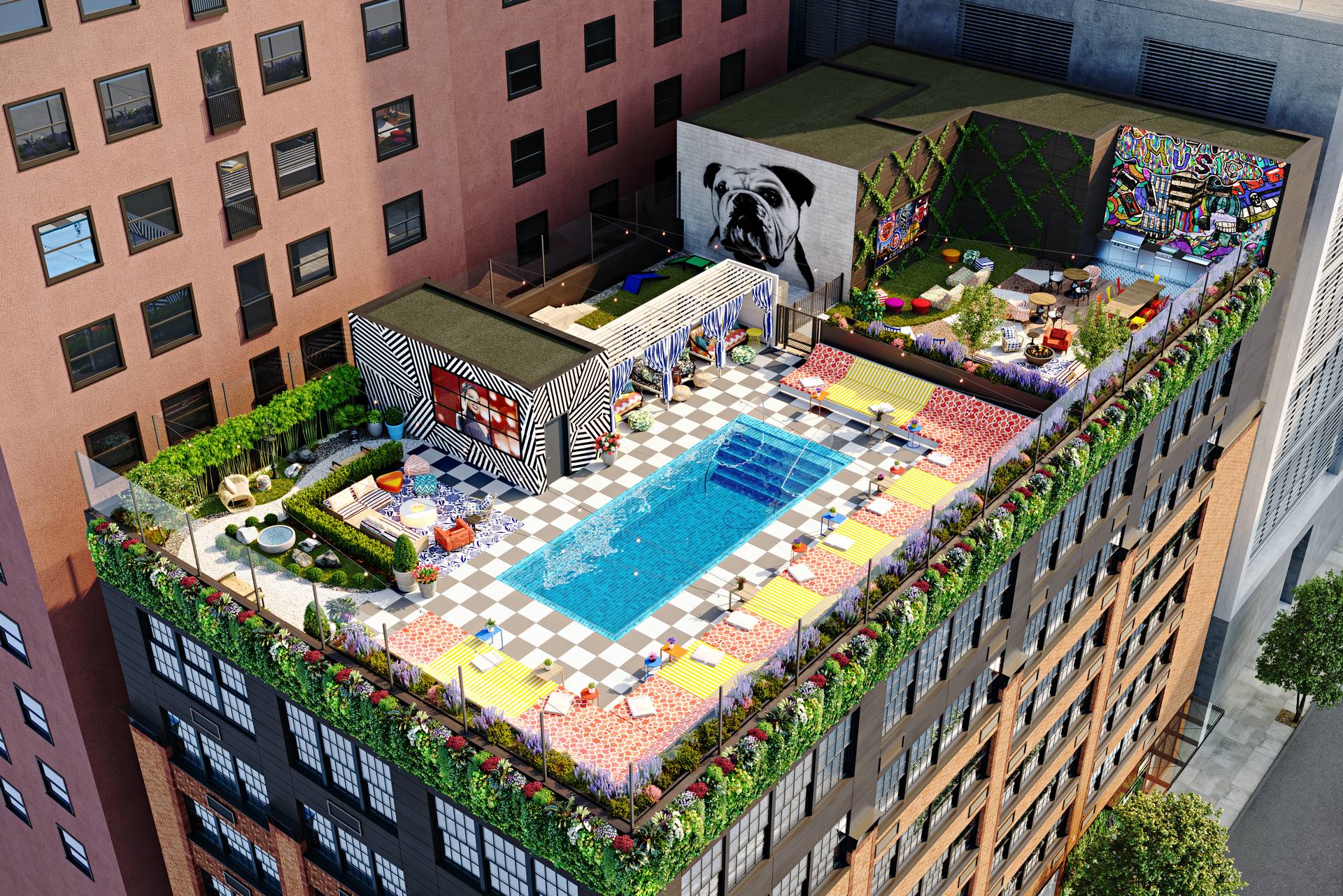 Previously Vista Tower, the St. Regis Chicago has been under construction since 2016 and is now complete. 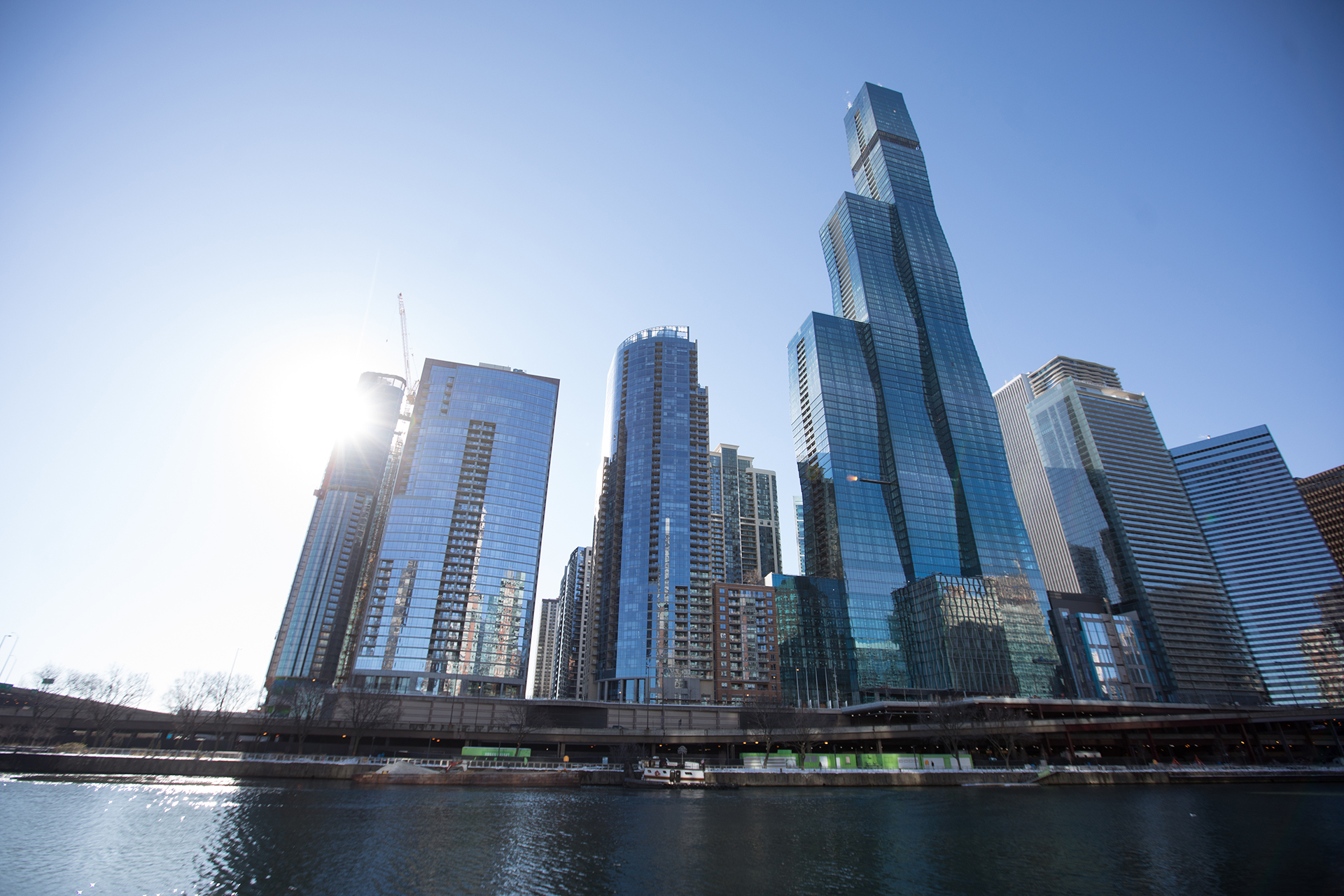 Construction is underway on Sterling Bay and Magellan Development Group's 47-story tower at 300 N. Michigan Ave. that will have 25,000 square feet of retail space, 289 residential units, and 280 hotel rooms. 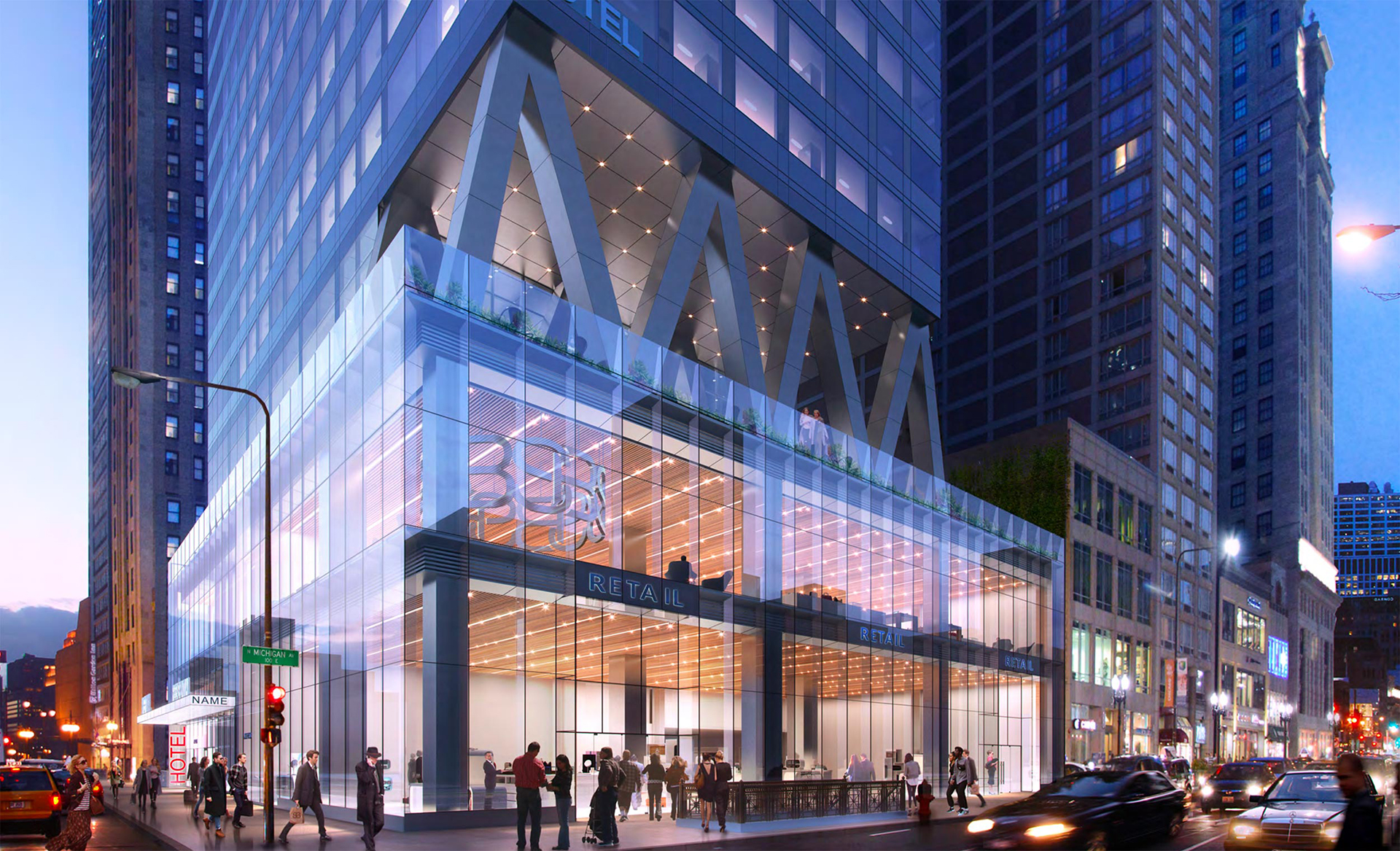 All the same transportation options for getting in the Loop exist now as before—public transportation, cycling, driving, ride hail, and walking—but each has seen some changes since the pandemic. Frequent cleanings, updated schedules, mask and social distancing requirements, parking deals, and more will await commuters. In March 2022, Mayor Lori E. Lightfoot, Chicago Police Superintendent David O. Brown, and Chicago Transit Authority (CTA) President Dorval Carter, Jr. announced new measures designed to improve public safety and security for Chicago commuters. The Chicago Transit Board approved two new contracts for the use of unarmed private security guards, which have been a component of CTA’s daily operations for more than two decades. The unarmed, uniformed security guards will continue to patrol stations across the system but will now also have dedicated deployments traveling on both buses and trains. 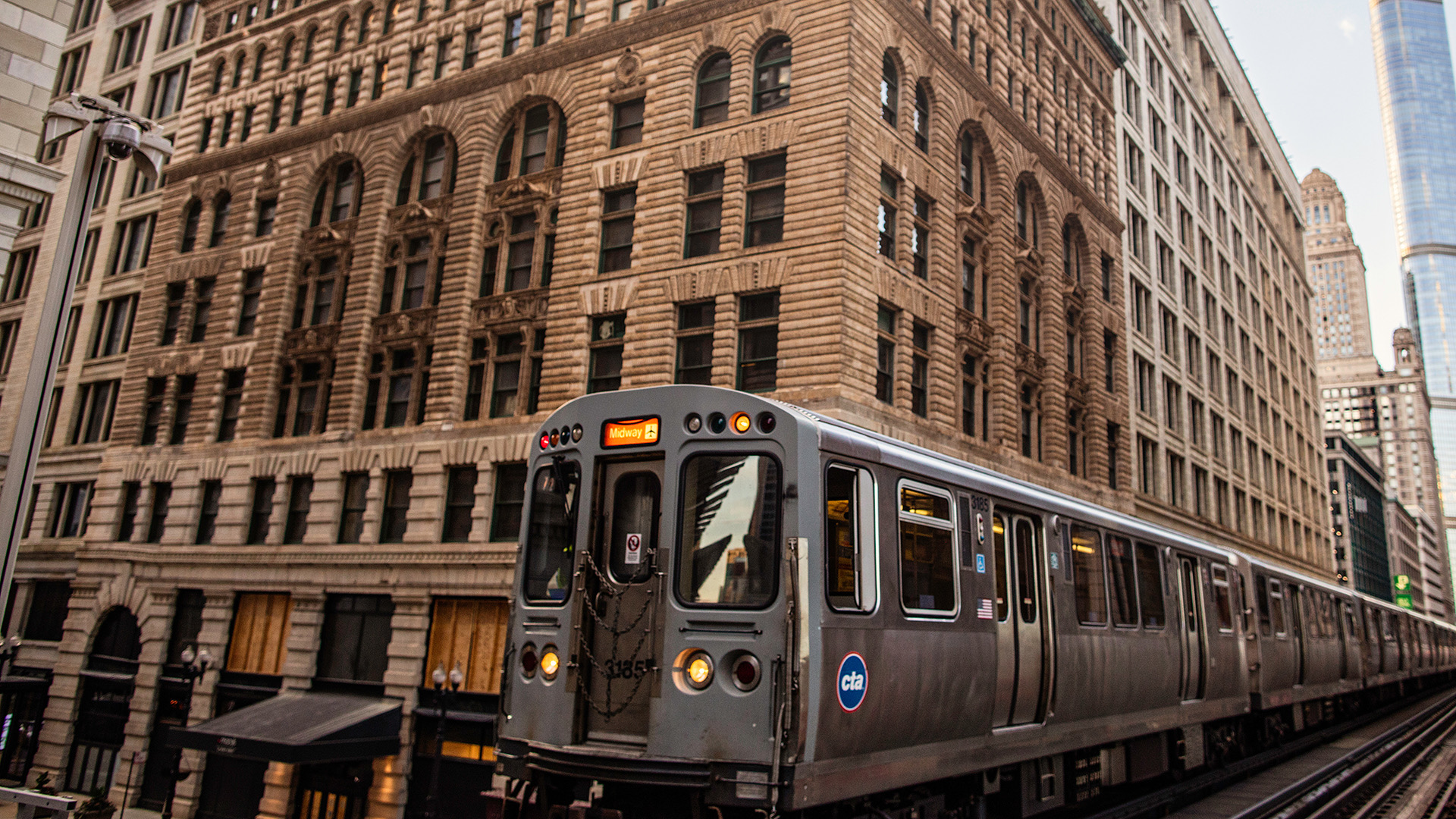 Resurfacing work, curb and sidewalk improvements, and pavement patching has been completed on Michigan Avenue from Ida B. Wells Drive to Monroe Street. In addition, workers waterproofed over the Grant Park South parking garage roof structure, between Jackson and Van Buren. Resurfacing work on State Street between Madison and Randolph has also been completed. And the Dearborn bike lane has received a fresh coat of green paint and lane markings, just in time for you to take a spin on one of Divvy's electric bikes, which were released over the summer in 2020 and feature pedal assist that tops out at 15 mph. Resurfacing work has also been completed State Street at Monroe, and portions of the sidewalk on State Street have been replaced thanks to SSA#1-2015. 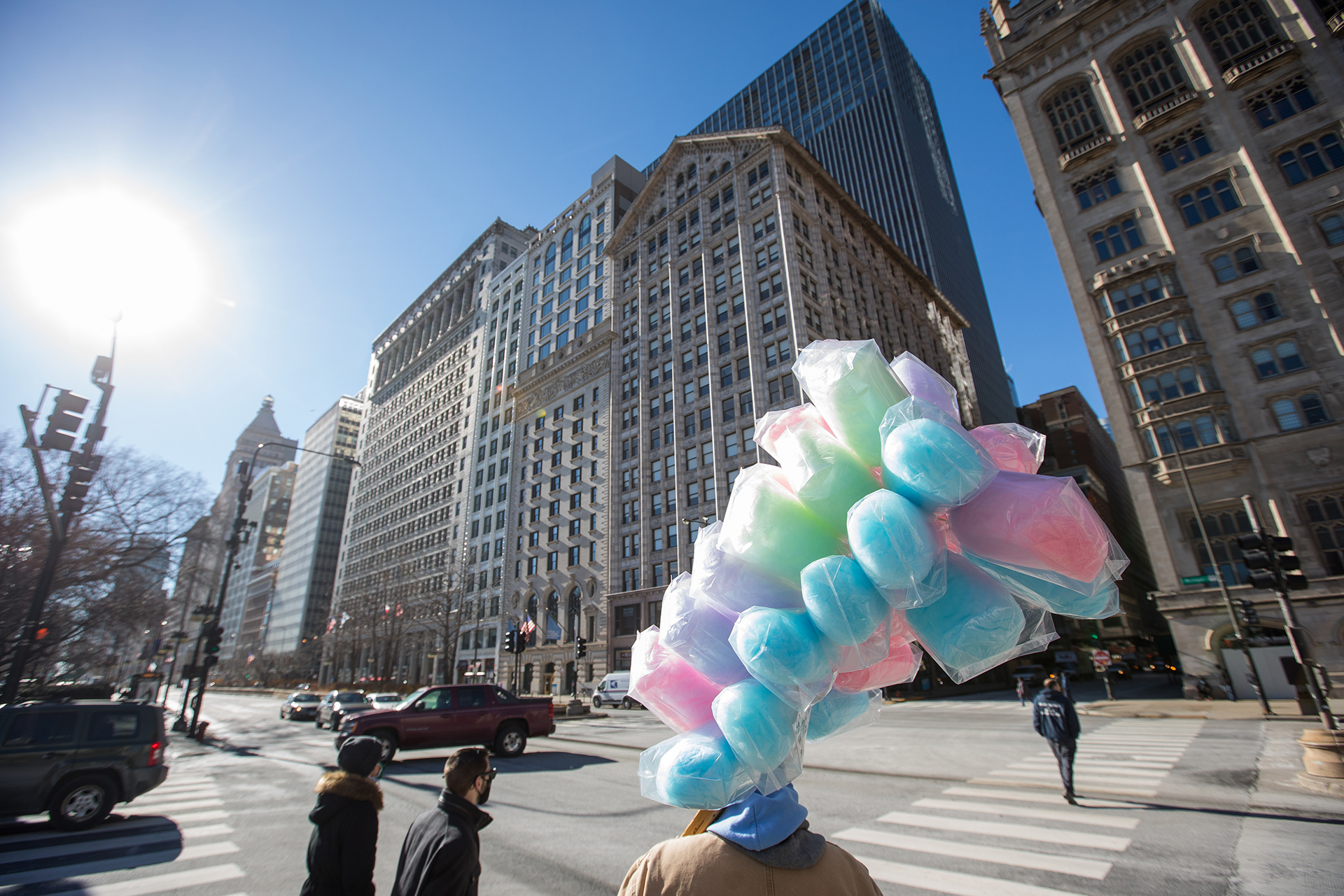 See something missing here? Chicago Loop Alliance encourages the public to share anything new or interesting in the Loop on social media using #BackInTheLoop.

Back to Office Toolkit

If you’ve always been in the Loop, are returning after a long hiatus, or just want to stay in the know about downtown,  our Back to Office toolkit provides the latest on being #BackInTheLoop. Learn More