5 MIN READ –Chicago Loop Alliance (CLA) released its May report on downtown activity, using a variety of data sources to track operations during COVID-19, as it has done monthly since July 2020. The report tracks COVID-19 positivity rates, pedestrian activity, parking volumes, hotel occupancy, number of office workers on-site and more. The data indicates that hotel occupancy has reached a record high, along with pedestrians edging closer to pre-pandemic levels, and office occupancy stabilizing. View the full May report here.

As the unofficial start to summer commences with warmer temperatures, increased worker activity, a hefty leisure travel season, and increased transportation modalities like biking and e-scooters, the continuation of a strong recovery in the Loop was visible for May. Several key metrics achieved weekly or monthly record highs – hotel occupancy monthly average surpassed its previous record at 71.3 percent of 2019 levels; pedestrians continue to exceed one million pedestrian counts each week on State Street in the Loop; and office occupancy maintained levels consistent with April data throughout the month. Pedestrian activity is one of the leading metrics with a peak of 75.8 percent, supported by the return of more office workers and major spring and summer events, while office occupancy began to plateau around 44 percent as offices and workers managed increased COVID-19 cases, and other potential impacts. 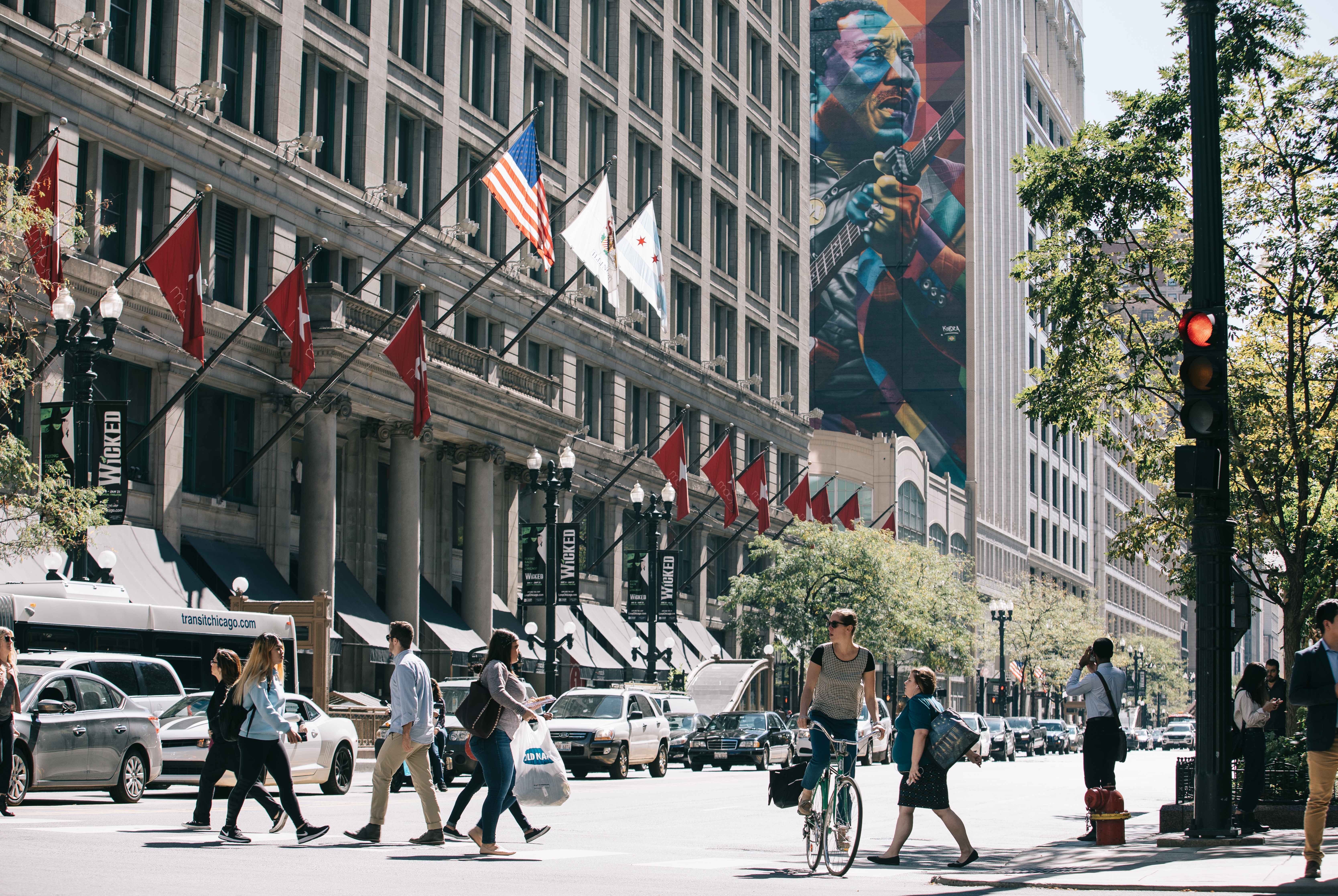 “Summer is nearly here and we are pleased by the pulse of activity in the Loop in May – office workers, residents, and students are still leading the charge for recovery, but we are also seeing an increase in tourism that is hopeful,” said Michael Edwards, President and CEO of Chicago Loop Alliance. “With major initiatives like Chicago Returns Week, and major events such as Sueños Music Festival, the Memorial Day Parade, and several concerts at Soldier Field, the Chicago Loop is positioned to see a continual recovery throughout the summer and rest of the year, especially with events like Chicago Loop Alliance’s ACTIVATE and Sundays on State.”

Continuing April’s trend, State Street in the Loop saw increased pedestrian traffic throughout the month of May. State Street had an average monthly recovery rate of 69.4 percent of 2019 levels for May with over one million pedestrians counts each week between Ida B. Wells and Wacker Drive. The month of May performed 66.1 percent better than the same period measured in 2021. Additionally, Michigan Avenue at both the Wacker and Washington intersections experienced increase pedestrian traffic. This month, Michigan Avenue in the Loop nearly doubled pedestrian activity compared to May 2021.

Warmer weather and downtown events including the Sueños Music Festival and Memorial Day Parade contributed to the boost in pedestrian counts.

“With the launch of Divvy e-scooters in May, the summer is poised to encourage innovative, affordable, and environmentally conscious transportation options for Chicagoans and the Loop,” said Gia Biagi, Commissioner of the Chicago Department of Transportation. “Micromobility solutions, like e-scooters, create a thriving and forward-thinking Loop economy that better connects people to jobs, services, and recreational spaces."

“Pedestrian traffic has increased tremendously over the past month,” said Candace Mason, Team Leader of the Chicago Loop Alliance Ambassadors. “It’s nice to see the Loop, specifically State Street, returning to a busy atmosphere.  I am looking forward to the summer months ahead, and a first-hand view of summertime in Chicago with the pandemic nearing the horizon.”

Hotels in the Chicago Loop reached their highest recovery rate yet at 71.3 percent of 2019 levels. This notable increase surpassed the 70 percent occupancy rate seen in December due to the holidays, and signals demand is increasing from leisure and business travelers. We suspect the trend to continue with summer events like Sueños Music Festival and Memorial Day weekend, along with other upcoming programming throughout the season. 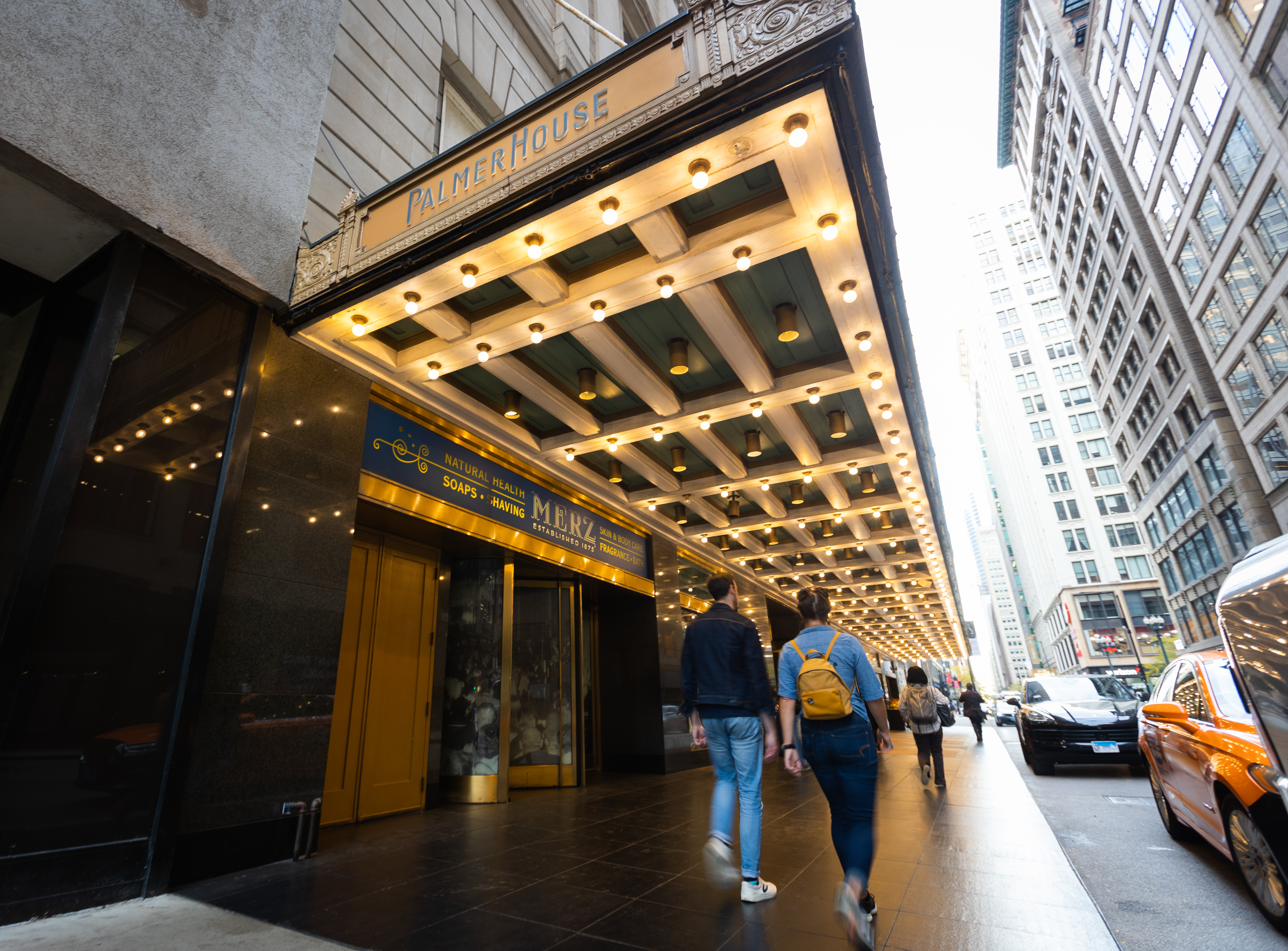 While recovery rates consistently hover below 50 percent, business activity is bolstered by an increase in live events and warmer weather. Additionally, May saw a peak of 44 percent of 2019 office occupancy levels. The monthly average recovery rate has doubled since last May’s rate of just 23 percent. May started off strong with Chicago Returns Week, encouraging workers to make their way downtown and enjoy the central business district for work and play. Again, the Memorial Day weekend likely contributed to the small dip in occupancy rates compared to April.

Organizations continue to invest in the Loop, including the recent increase in office space for trading firm IMC. These recovery rates are in line with other major cities such as New York City, Los Angeles, and Washington, D.C., but continue to lag behind other metros such as Austin.

“During Chicago Returns Week, we celebrated the return to downtown, and welcomed tenants back to the office with outdoor public activations, promotional discounts, and a well-received social media campaign,” said Farzin Parang, Executive Director of BOMA/Chicago. “More than 50 downtown buildings participated in the campaign, by lighting up the skyline blue and hosting tenant events, including prize giveaways; live music; and happy hours. While Chicago Returns Week may be over, the vast amenities offered within our buildings and across our beautiful downtown, including a wealth of restaurants, cultural institutions, and beautiful outdoor spaces are here year-round.

At 52.5 percent of 2019 levels, the CTA ridership rates saw a slight increase in demand in April 2022 as compared to March’s rate of 50.8 percent, and saw its highest ridership rate during the pandemic at 57.1 percent during the week of April 18. March and April reveal a promising trend of improvement for ridership after a significant drop in recovery rates at the end of December 2021 and January 2022 due to the Omicron variant. There is increase in ridership on trains, with daily commuting improving at an average of 277,309 daily trips for the month of April. Anecdotally, Loop workers have reported experiencing increased ridership on buses and trains throughout the city. 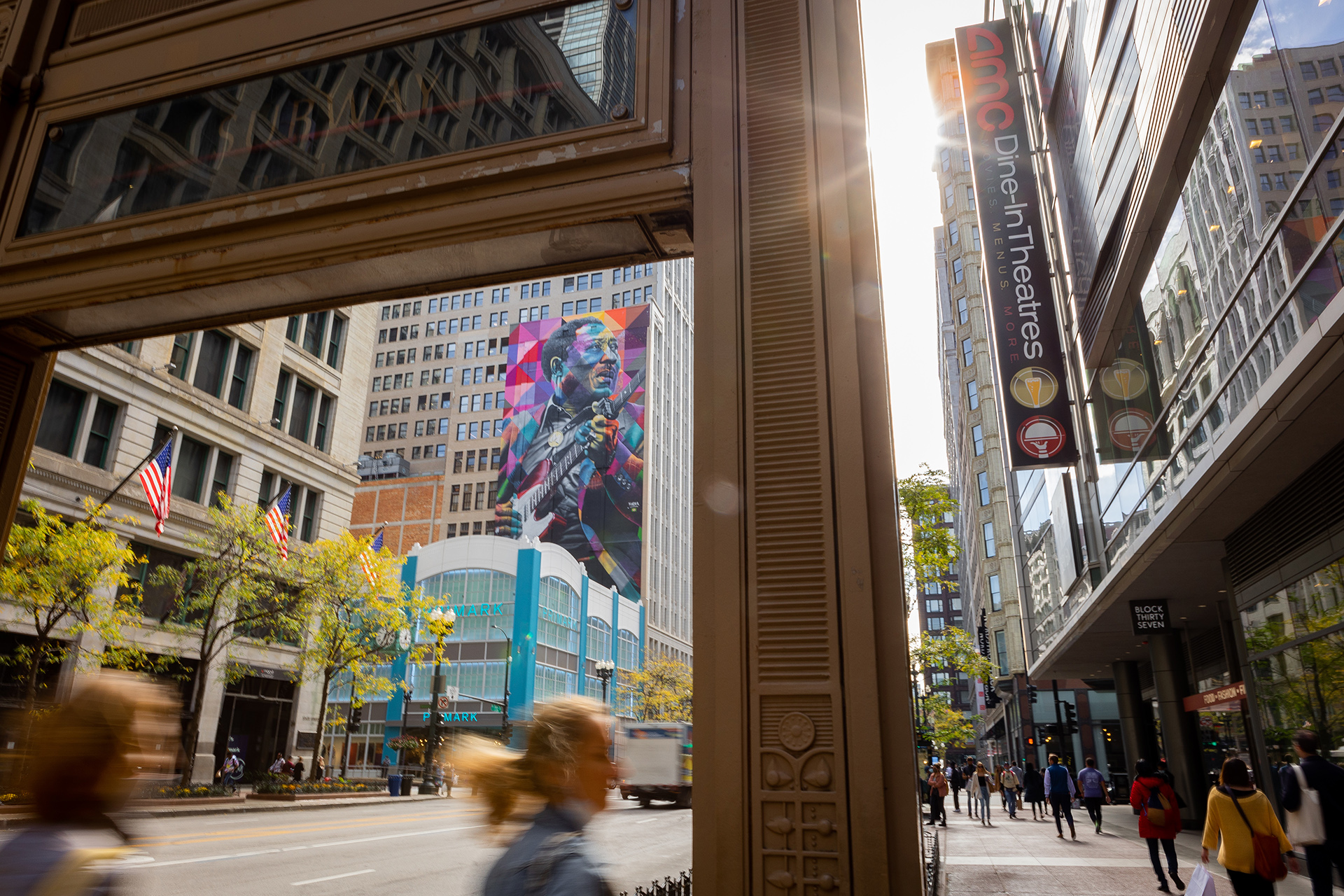 Parking garages improved since April, with monthly averages jumping from 61 percent to 87 percent of 2019 levels. This may be due to an increase in downtown events, along with more workers returning to their offices. Balancing these two realities may result in a higher demand for parking. 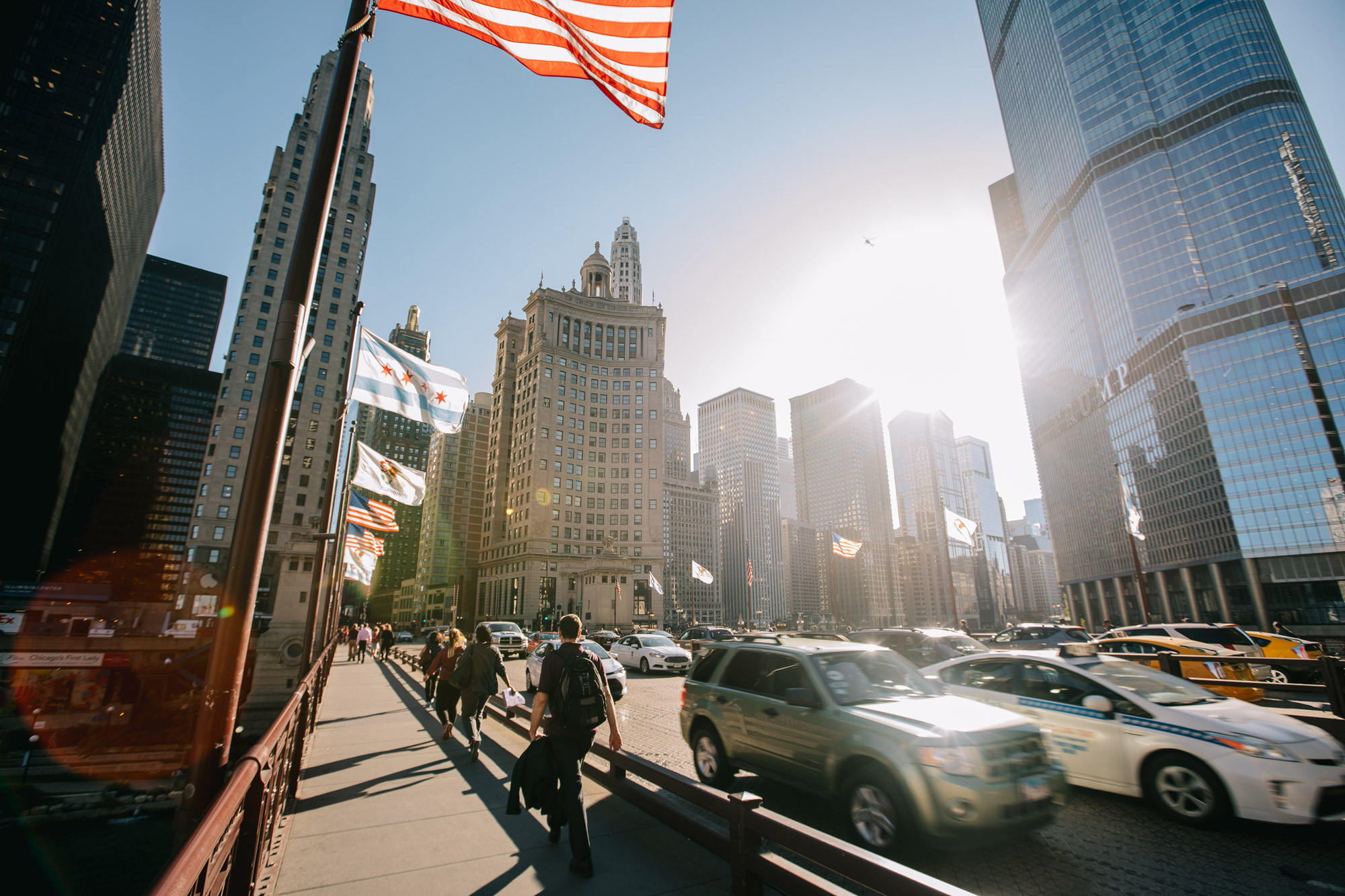 For those Loop workers who continue to return downtown, Chicago Loop Alliance has created a Back to Work Toolkit that can be found at LoopChicago.com/BackToOffice. The toolkit includes insider tips for working downtown in the Loop for those who never left, as well as those who are returning or want to stay in the know. Find useful information on how to safely get downtown; what’s new in the Loop; what the Loop looks like these days; lunch and happy hour spots; and more. 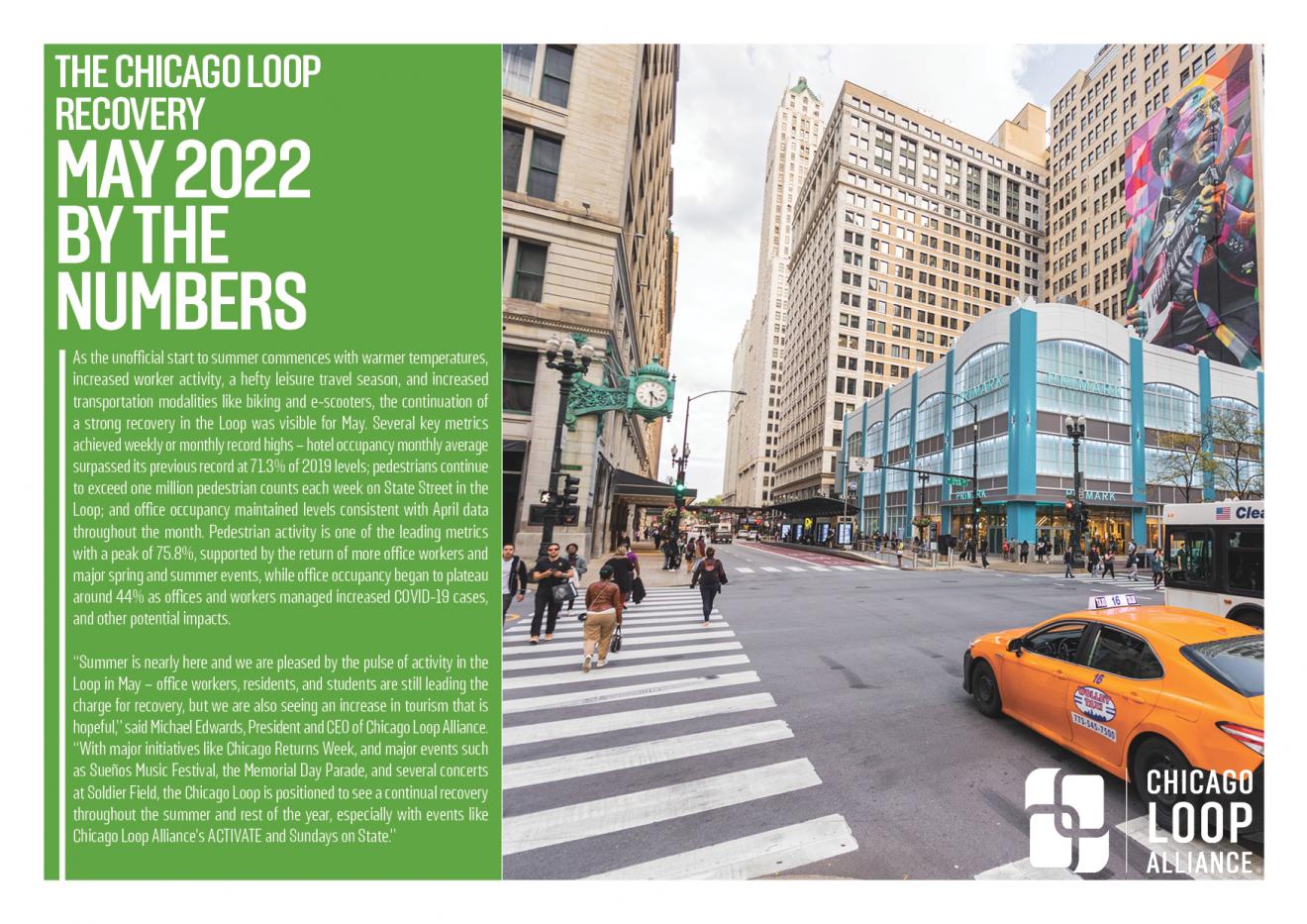 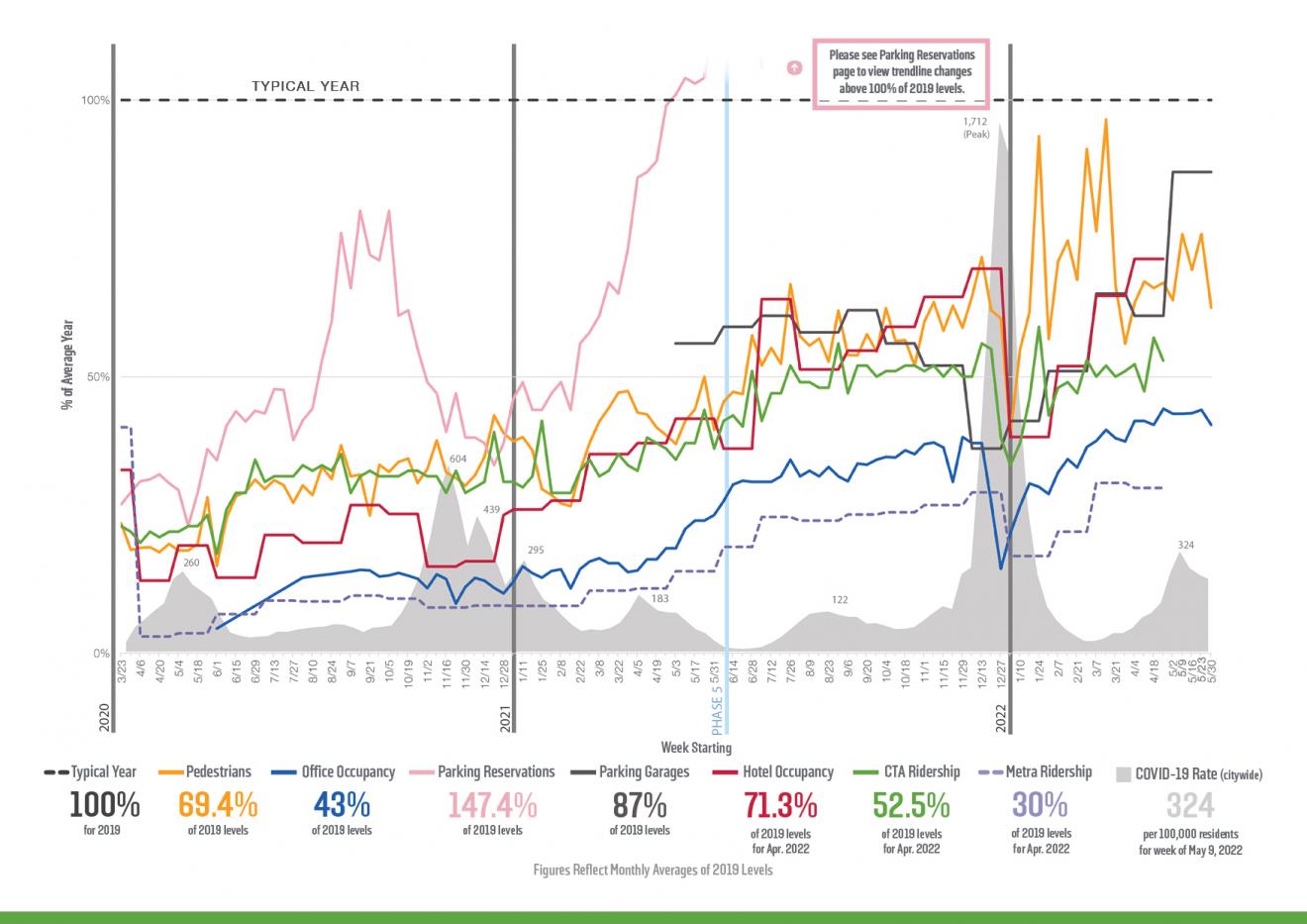 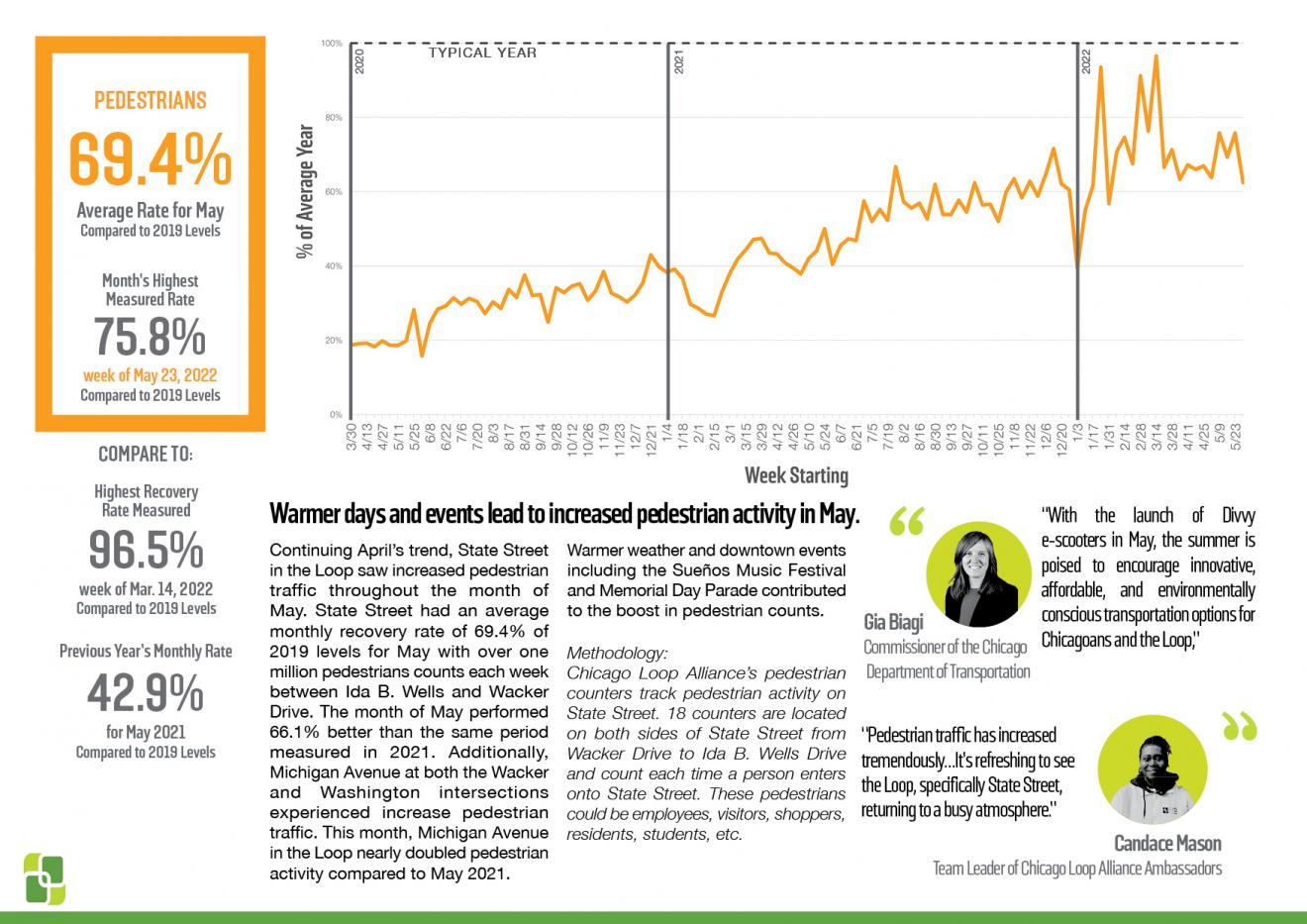 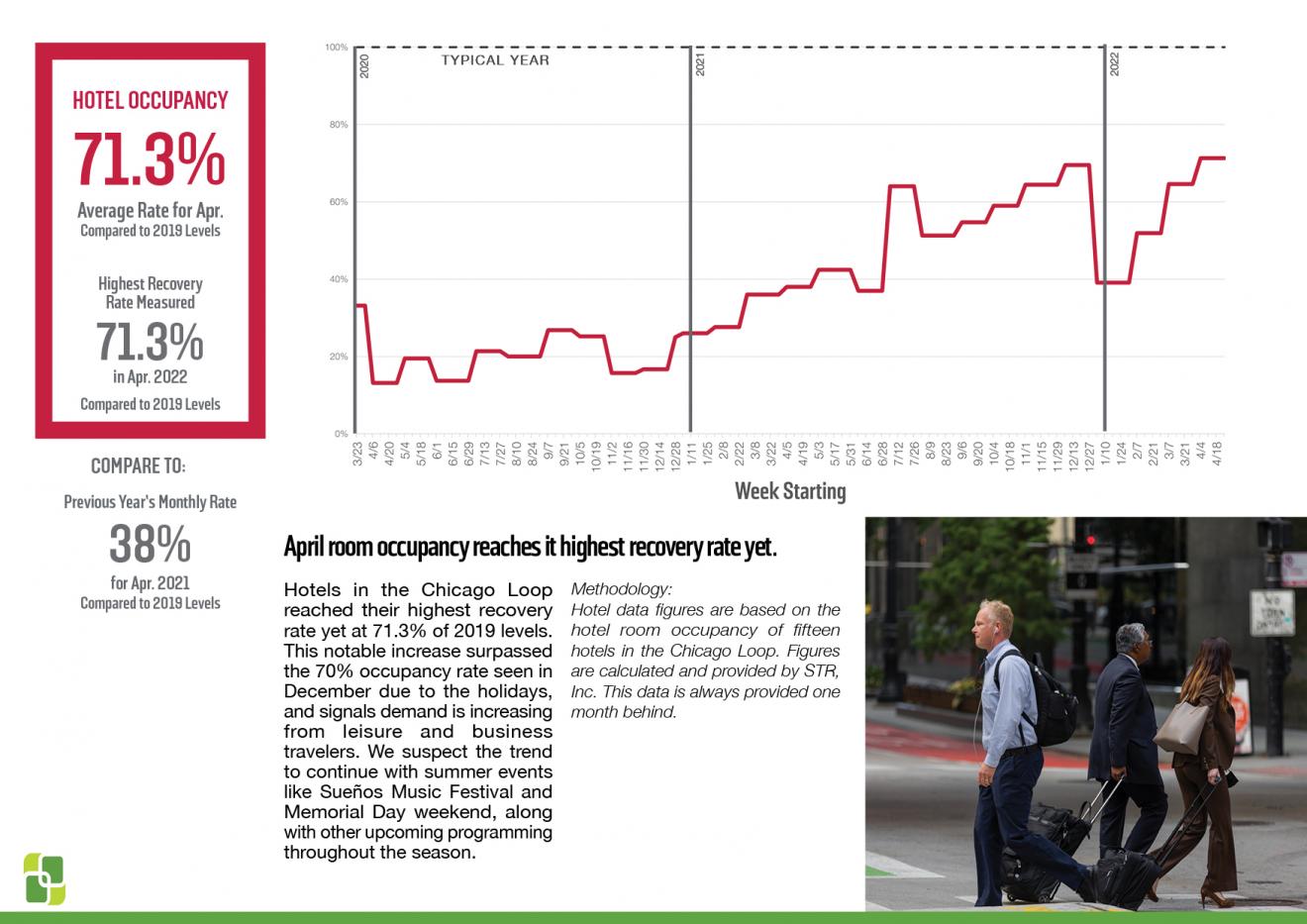 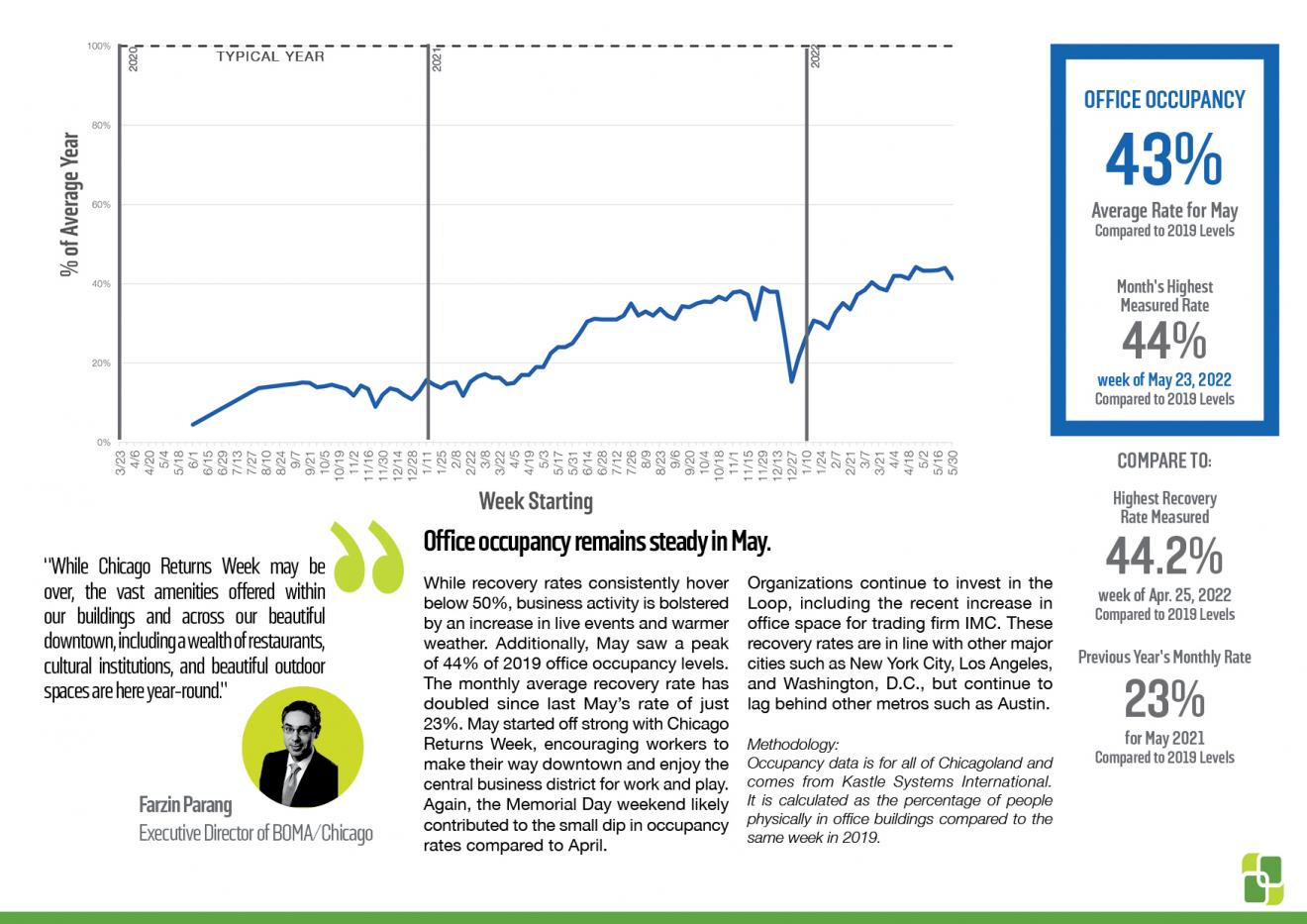 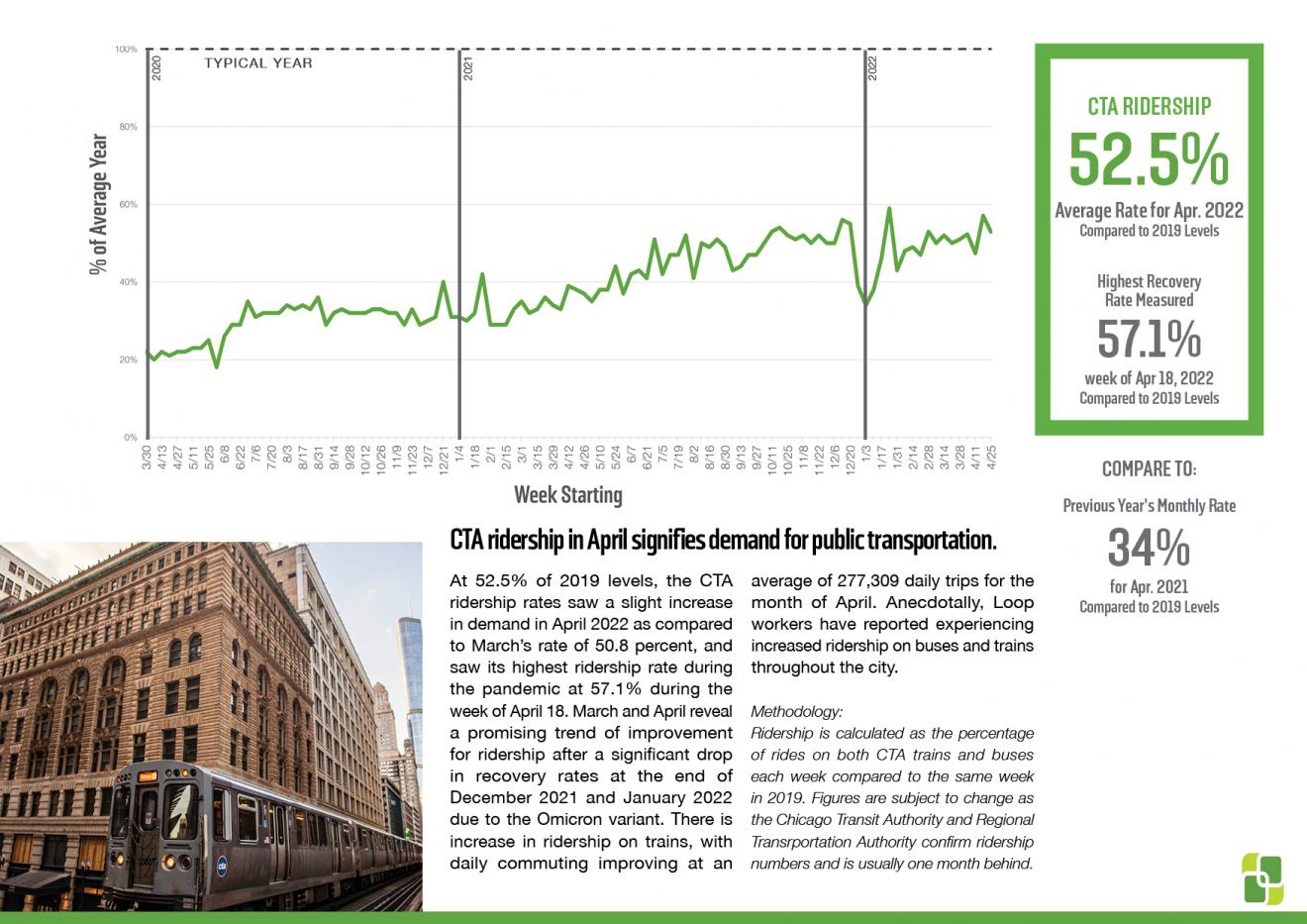 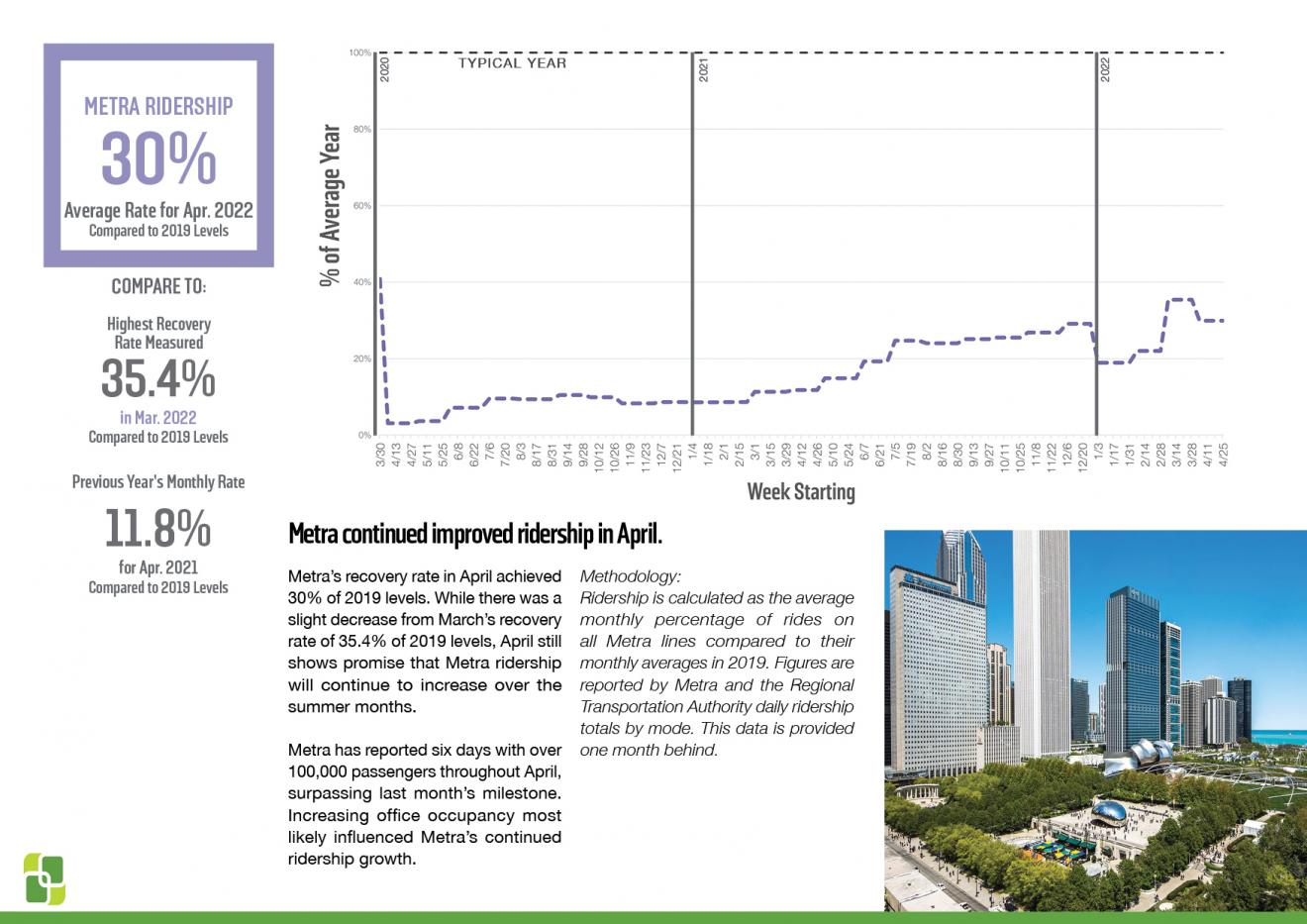 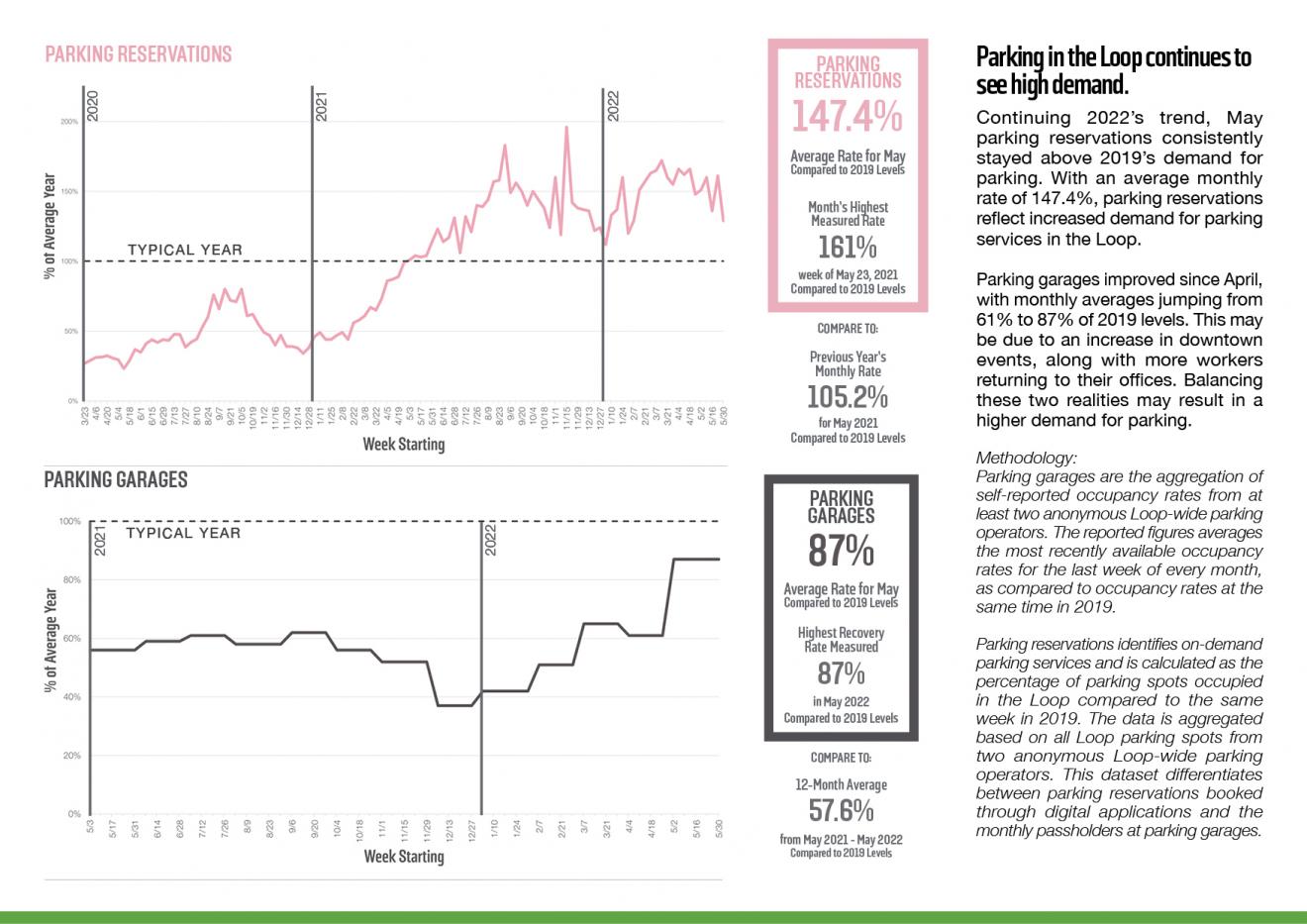 ACTIVATE returns to the Loop for a one-night only spectacular! Learn More
Can't find what you're looking for?
Get travel inspiration, tips and exclusive offers sent straight to your inbox.