Posted  18 days ago  in  Trending, Guest Blog  by  Michelle Kaffko of Organic Headshots

5 MIN READ – The Chicago Loop is a freaking goldmine of beautiful places to take headshots and group photos downtown. But WHERE? Let me rephrase that: WHERE IS IT LEGAL?

And now, I’m going to answer that question with a question: DEFINE LEGAL?

Now that all our law firm clients are totally paying attention, let me explain. Grabbing some quick headshots in front of Chicago landmarks downtown is both just as easy as it sounds, AND a complete nightmare. There are three types of locations in the loop where you might be able to take professional photos: 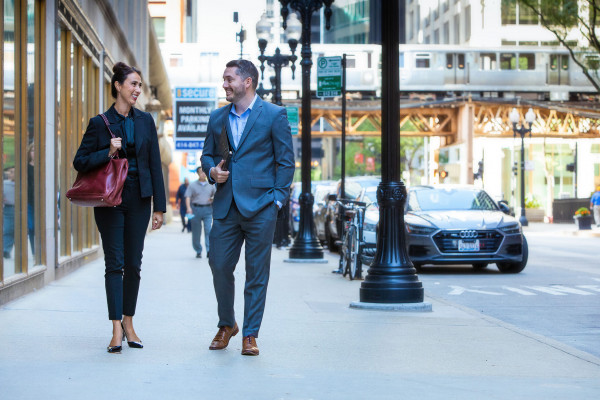 Let’s start with public property where you need a permit.

The first, is CTA property. Getting an EL station in the background of your photo makes for that quintessential Chicago Loop look. But actually taking a pro photo on the EL platform is a big fat NO. Getting a train or a station or the beautiful steel girders in the background if the photo is taken from a building or street level is A-OKAY. But keep your feet off the platform.

Next, is Park District property. A lot of the great views and backgrounds of the city are on Park District property, which is great for the public to enjoy for free (that’s kind of why they were created, duh), but photographers need a permit so that everyone who travels to our great city to enjoy its landmarks don’t have to stand in line behind a dozen wedding parties waiting for a group shot in front of the big bean. In the Loop, these include Buckingham Fountain and (as of 2022) the Museum Campus view of the skyline from Solidarity Drive. Millennium Park, Maggie Daley Park, and the Cancer Survivors Garden also require permits, but they’re independently managed so you need to contact a different office to access them. 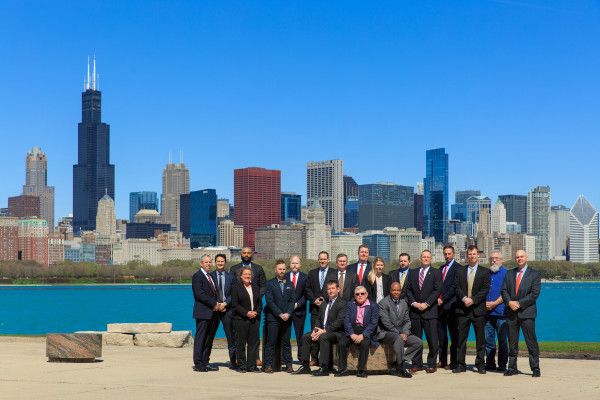 Here’s a link to where to apply for a Park District permit (which for headshots runs about $45/hour) and what the Park District defines as needing a permit. Technically, headshots, corporate lifestyle photos, or company group photos aren’t on the list. But “non-commercial use” is defined as “such as engagement, wedding, and other special occasions” on their site, so that could be argued to mean professional headshots.

You could theoretically argue that headshots aren’t specifically on the list, so we should be able to shoot in whatever Park District area we want without a permit. But do you really want to spend like 20 minutes arguing this with a security guard who is just going to stamp a big fat NOPE on the operation and stand in front of your lens until you leave? Or do you want the stress of meeting your whole sales team at the big bean for a group shot and cross your fingers that you can get it done quickly enough before a security guard notices and shuts it down, and then you and 20 other people have to figure out where to go next and how to take the photo before the 10am all hands meeting? Probably not.

Now let’s take a look at public property where you don’t need a permit. I’m going to define this as any city owned or federally owned property downtown that doesn’t explicitly declare that a permit is required. A good example of a few places we’ve been able to blatantly set up lights, tripods, and professional cameras for headshots or group photos without getting bounced are Daley Plaza, Federal Plaza, outside the Thompson Center, the Chicago Riverwalk, and most city streets/sidewalks. 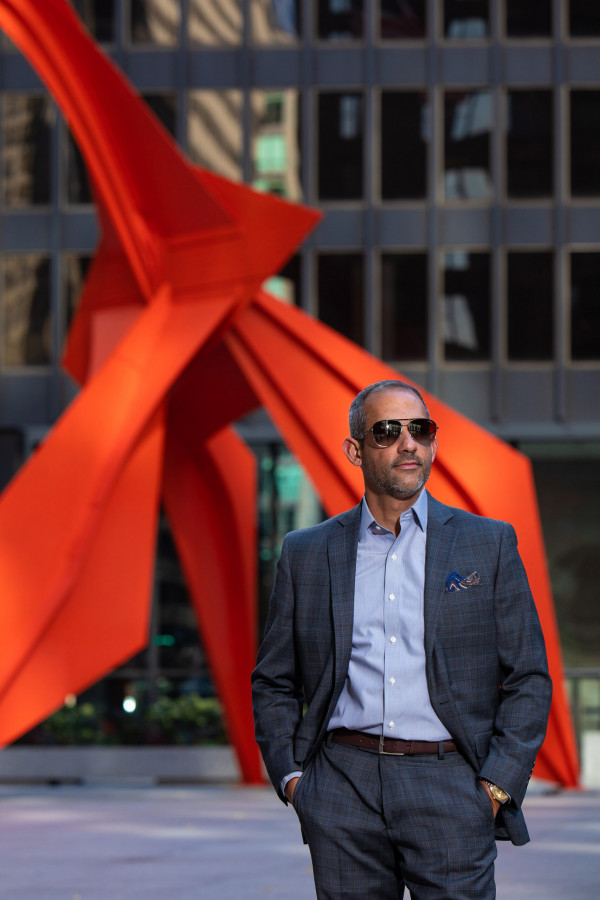 You can take pro photos and even set up a light or a tripod on any public city street, as long as you’re not blocking off any streets or sidewalks, and people can still drive and walk by with no problem.

This is a good time to explain the difference between public and private property, because going all “guerilla style” and snapping headshots on the street can get dicey if you don’t choose your street properly. Most walkways are public. But on private property. For example, take Chase Tower on the corner of Dearborn and Monroe. There’s a beautiful, open plaza that anyone can walk through, sit and people watch, or grab a snack and admire Chagall’s Four Seasons. But just try to grab some professional headshots anywhere past the actual sidewalk and onto Chase Tower’s private property and a security guard will be on you faster than mustard on a hot dog. (Trust me, I’ve met the guy: polite as hell, but all business.)

How do you know if it’s public or private property? We like to look at the ground we’re standing on. Does it look like standard, city-issue concrete? You’re most likely on a public sidewalk. Is it stone, a different concrete color, or anywhere off the usual straight path that abuts the street? Assume you’re on private property. This includes waterfront sidewalks. Most property on the river aside from the Riverwalk, which is a public park, is privately owned.

Private doesn’t mean you can never ever photograph there, it just means you need permission from the property owner. Which means getting in touch with the property management company of the building and asking permission. Sometimes you’ll get lucky and they’ll say “sure no problem.” Sometimes they’ll say “sure no problem, but have your insurance company list us as an additional insured on your liability policy and provide us with a certificate of insurance (COI).” And sometimes (for example, at 311 S. Wacker Park) they’ll say, “sure, it’s $1,000/hour.”

Pro tip! Did you know the Art Institute of Chicago allows for photography on their grounds? You can take photos in any of their permanent collections, in the garden, or any of their indoor or outdoor public spaces, as long as your group isn’t bigger than six people and you don’t use anything like lights or tripods. 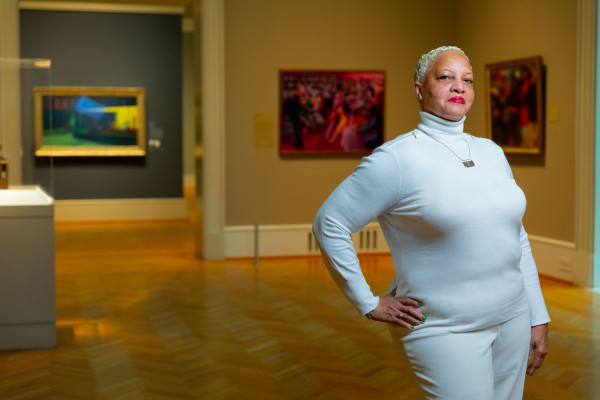 If you’ve made it this far in your reading, our gift to you is a short list of our secret shooting locations which usually have options with good light and no one to kick you out:

If you’re looking for an outdoor look to your photos or hoping for a city landmark in the background and this whole thing just raised your blood pressure too much, chat with us about green screen. We can make your photos look like they were taken outdoors in the beautiful Chicago summer… but in the comfort of an air conditioned room. SCIENCE!

NASCAR hits the Loop streets in 2023

4 MIN READ – Vroom, vroom! The Chicago Loop will now be home to the 2023 NASCAR Cup Series, where plans for a street-circuit race on the streets of downtown… Learn more

The award-winning Sundays on State event series returns for select Sundays in the summer of 2022! Learn more
Can't find what you're looking for?
Get travel inspiration, tips and exclusive offers sent straight to your inbox.