2 MIN READ – Since July, Chicago Loop Alliance has been collecting monthly survey data from its member businesses and stakeholders to track operations during COVID-19, and today released its April report. View the full April report here. Some highlights include: 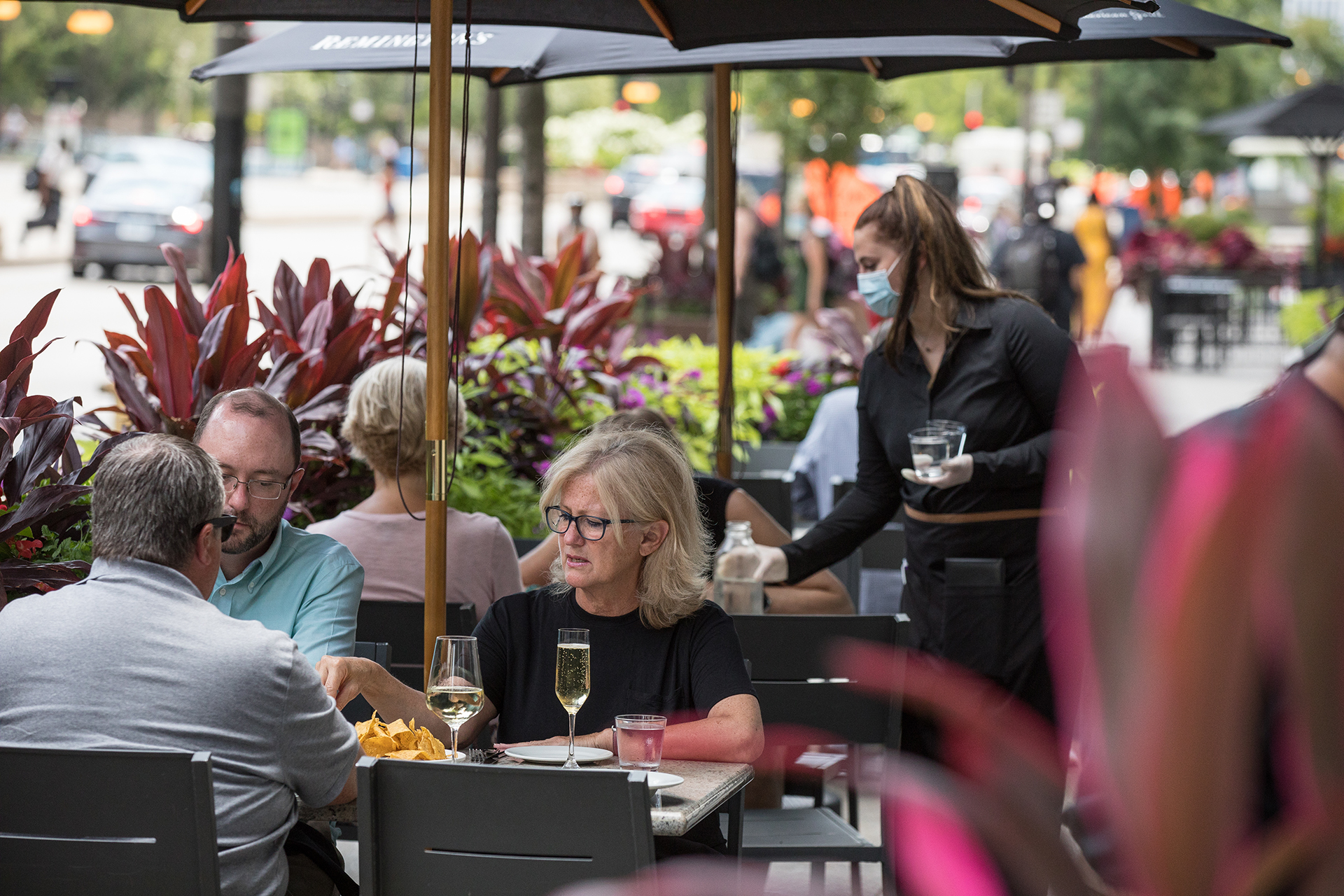 In April, outdoor activities like dining on a patio or visiting a park were more popular than indoor dining and visiting an indoor attraction. But shopping was the most popular in-person activity, indicating that retail in the Loop remains a strong draw.

“We are encouraged to see data that illustrates the Loop’s steady recovery, and we expect it will only get better from here,” said Chicago Loop Alliance President and CEO Michael Edwards. “We’re seeing more headlines announcing large companies’ plans to return to the office, and we know anecdotally that these stories are playing out at smaller businesses, too. In fact, Chicago Loop Alliance will invite all staff back to the office full-time beginning June 1. We know that the culture around work will shift to support flexibility and safety, as the COVID-19 pandemic is not yet over, but we anticipate a bustling Loop this summer. We can’t wait.” 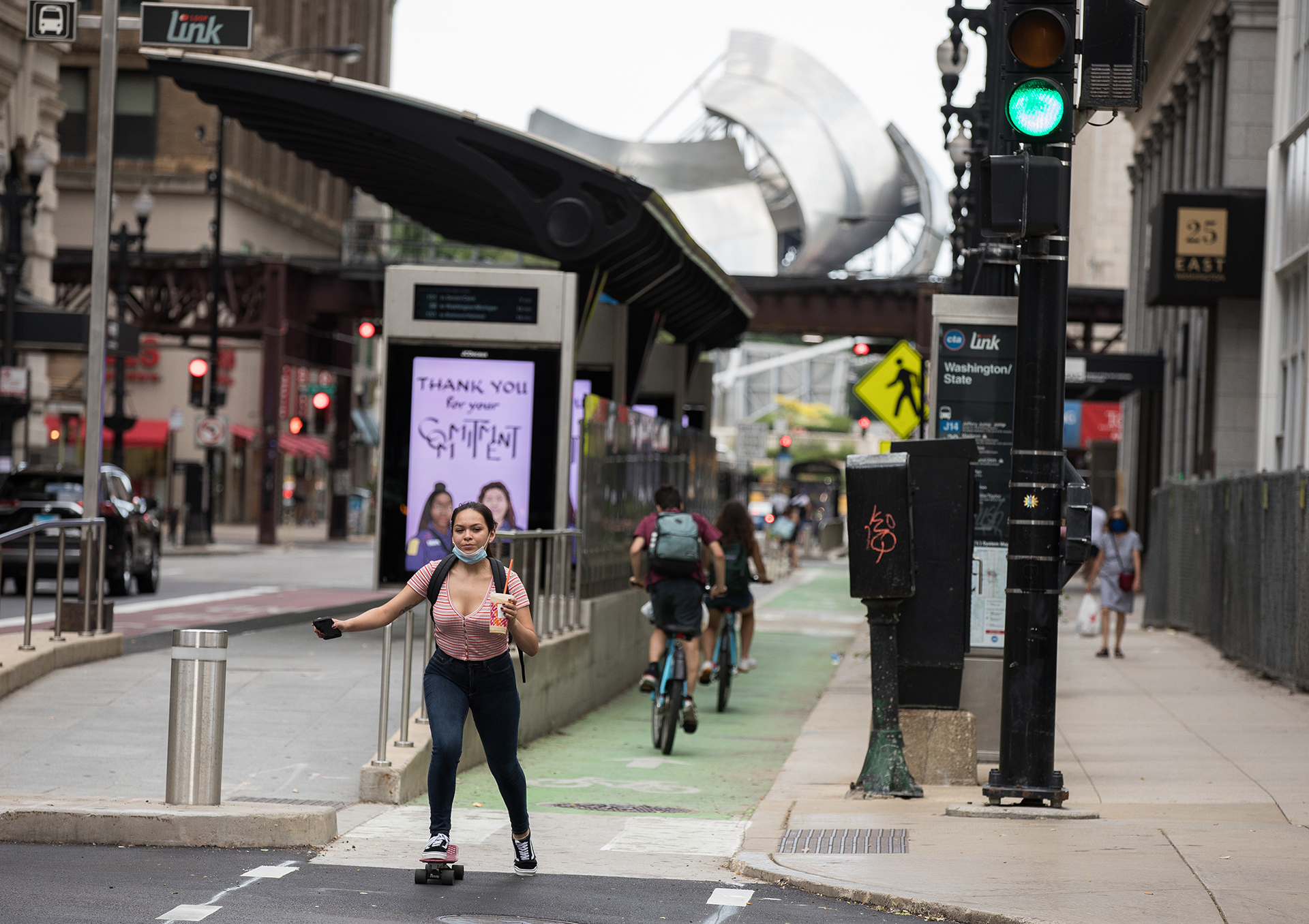 For those Loop workers who will soon return downtown, Chicago Loop Alliance has created a Back to Work Toolkit that can be found at LoopChicago.com/BackToWork. Perfect for those who never left, as well as those who are returning for the first time, the toolkit includes insider tips for working downtown in the Loop. Find useful information on how to safely get downtown; what’s new in the Loop; what the Loop looks like these days; lunch and happy hour spots; and more. 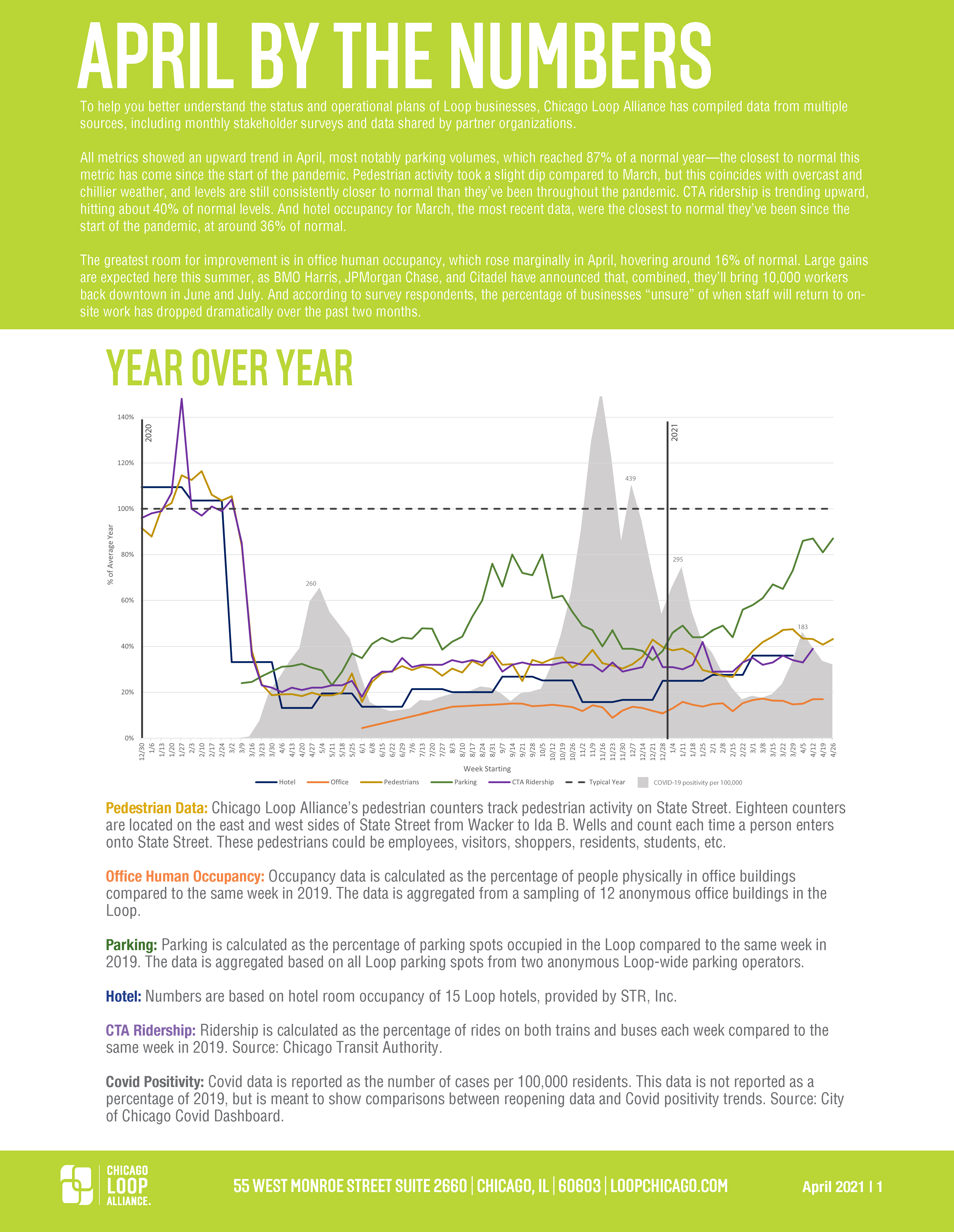 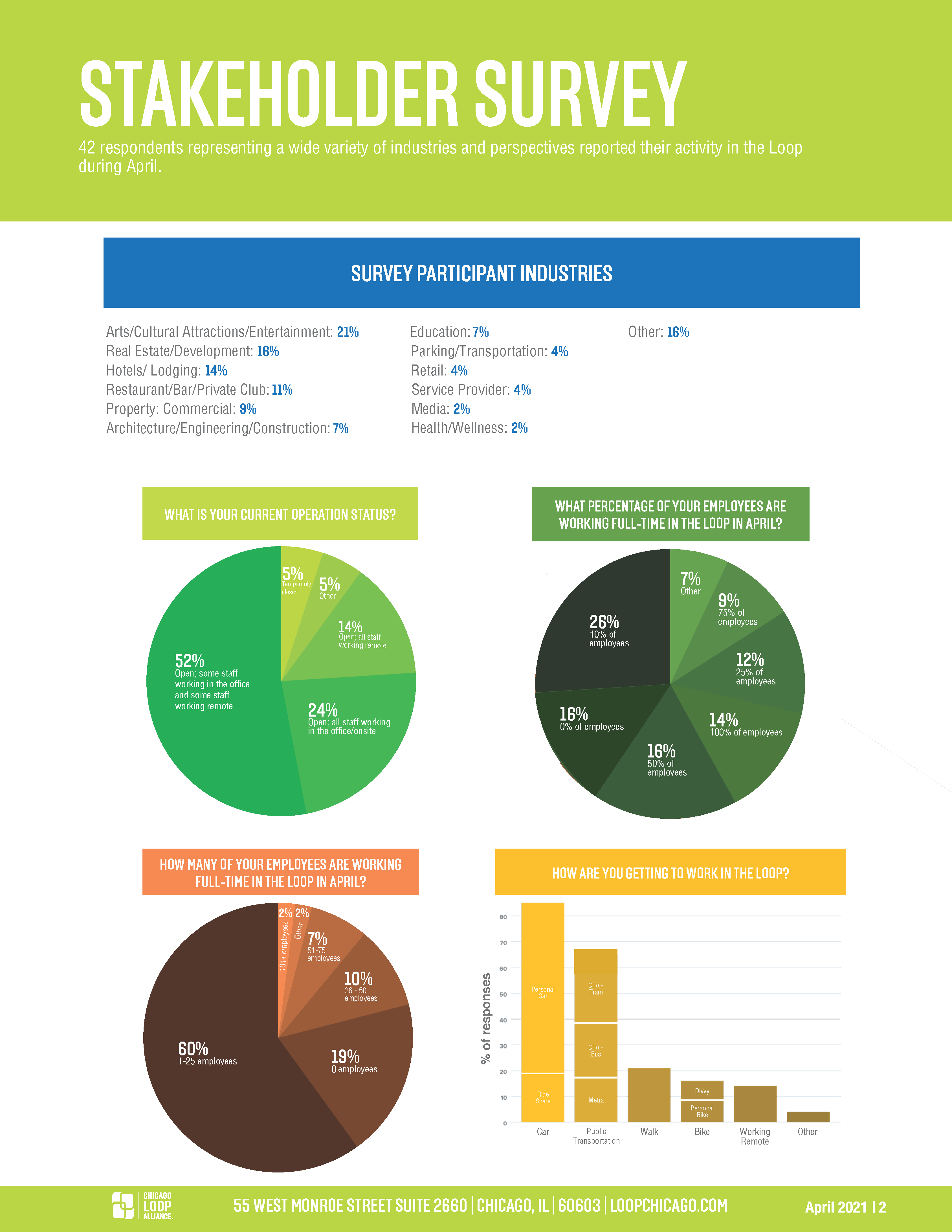 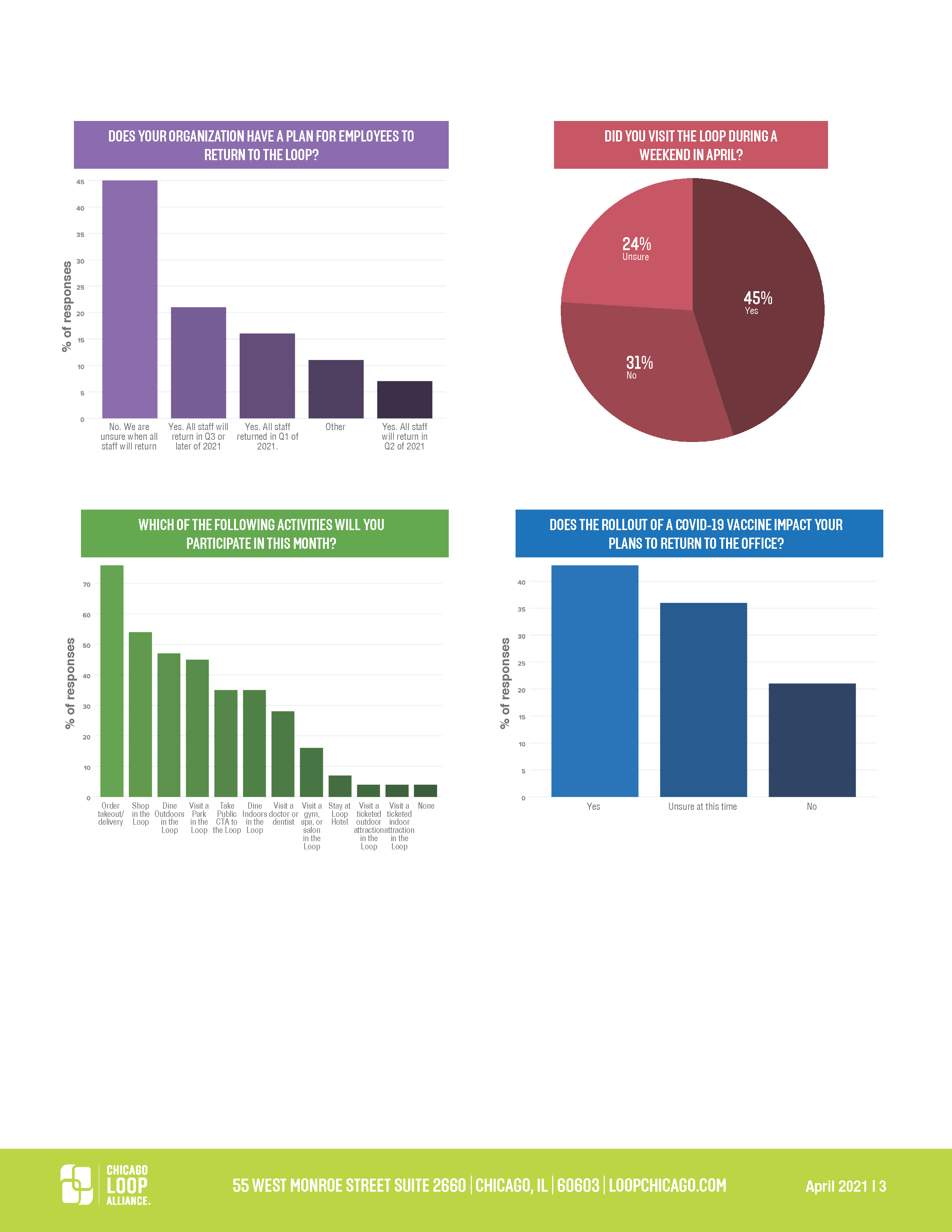 March activity in the Loop shows signs of a comeback

By the numbers - Monthly Reports

Chicago’s most iconic street, State Street, will close to traffic from Lake to Madison on Sundays this summer and transform into an open street full of surprises beginning July 11. Learn More
Can't find what you're looking for?
Get travel inspiration, tips and exclusive offers sent straight to your inbox.