With a record number of tourists coming to Chicago last year, the Loop has become a magnet for hoteliers wishing to capitalize on this growth. Six months into the year, we've seen the opening of several long-awaited projects including Hyatt Centric The Loop Chicago, a Hampton Inn inside the historic Chicago Motor Club Building, and the world's first Virgin Hotel. Last week, another hotel joined this impressive list: the Chicago Athletic Association Hotel.

If you're like me and you've had the chance to check out this latest addition to the Loop's hotel offerings, you may have been left with some pressing questions. What is the Chicago Athletic Association? How old is the building? Why am I seeing the Chicago Cubs logo all over the place? In our latest Then & Now post we take a look at the history of this incredible building and its journey to becoming a hotel.

1890 was an important year as far as Chicago history goes. On April 25, President Benjamin Harrison signed his name to the World’s Fair Act, officially designating Chicago as the host of the game-changing Columbian Exposition. In June, census takers tallied the population of the 53-year-old city, which, for the first time, topped one million residents and earned Chicago its title as “Second City.” And at some point in the year, although the date isn’t exactly clear, a group of prominent businessmen came together and founded the Chicago Athletic Association (CAA).

To ensure that the architecture of the clubhouse appealed to its clientele, CAA founders called upon Massachusetts-born architect Henry Ives Cobb to lead the design. If his name doesn’t sound familiar, it’s likely because many of Cobb’s notable works, including the castle-like Palmer Mansion on Lake Shore Drive and controversial Chicago Federal Building at Dearborn and Adams, were demolished before the preservation movement had firmly taken root in Chicago. Today, structures like the Newberry Library and historic Harriet F. Rees House, which recently made headlines after it was transplanted to a location further down the street, stand as testaments to Cobb’s accomplished career. 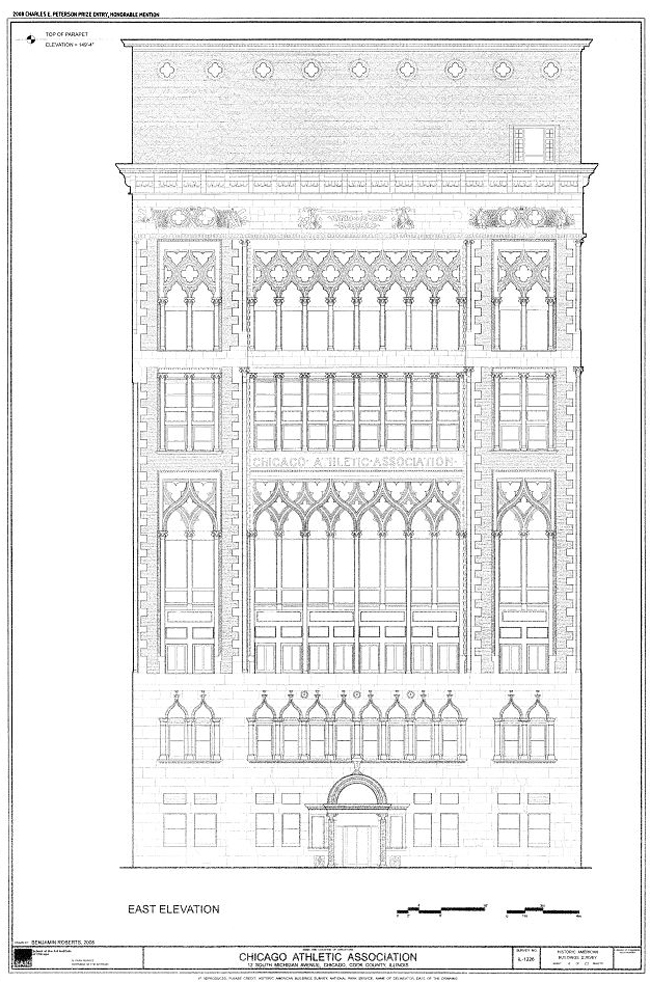 A blueprint showing the exterior of the building as it appeared in 2008. (Credit: Library of Congress)

With the Columbian Exposition fast approaching, Cobb elected to base the exterior of the Chicago Athletic Association on the Doge's Palace in Venice to give the façade a distinct identity when viewed from the lakefront by visitors of the fair. Nearly 125 years after it first opened in 1893, the Venetian Gothic 250-foot tower, deemed a Chicago landmark, still stands out from its counterparts along the Michigan Avenue Streetwall. Yet, some of the most impressive architectural features were saved for the building’s interior, which has been exquisitely preserved as you’ll read later in this entry.

The Chicago Athletic Association attracted some big names. Members swam with five-time Olympic gold medalist Johnny Weissmuller and watched their fellow member, William "Pudge" Heffelfinger, become football’s first pro. While membership was available only to men until 1972, women were invited to participate in dinners and concerts at the club throughout its history. It was one of the only big city athletic clubs to survive the Great Depression, but by the turn of the millennium the club’s membership—estimated at 3,000 or more when it first opened—dwindled to less than 500. With the once-bright façade tarnishing under the strain of more than one hundred Chicago seasons, the building closed its doors in 2007.

With the Chicago Athletic Assocation's future uncertain, hotelier John Pritzker, AJ Capital Partners LLC, and Geolo Capital purchased the building and announced plans to convert it into a luxury hotel. In an homage to its history, the name that adorned the outside of the building for more than a century would stay. 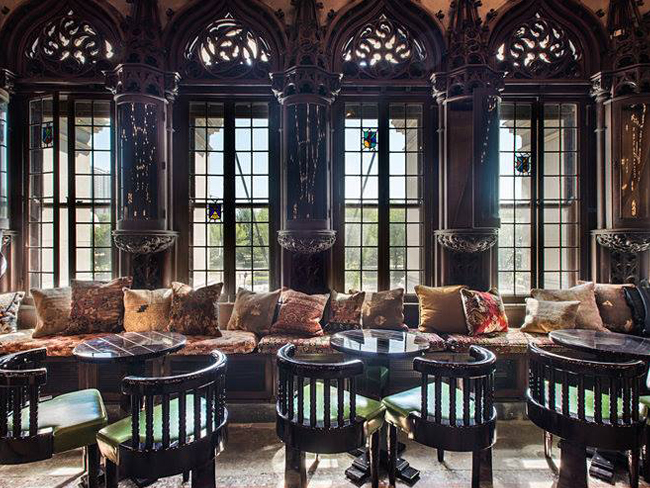 The partners assembled a team of designers including Chicago-based Hartshorne Plunkard Architecture and the award-winning Roman and Williams Buildings and Interiors. The latter developed a unique visual language devoted to preserving the building's original character and details while creating an atmosphere that brings the Chicago Athletic Association into the 21st century. Roman and Williams utilized a range of materials throughout the building, from a rich masculine palette in the guestrooms and public spaces, to a brighter expression within Cindy's, the building's rooftop bar and restaurant. From early 20th-century-inspired guestrooms and colossal fireplaces with extraordinary bas-relief woodcarvings, to 19th century stained glass windows and ornate marble staircases, the Chicago Athletic Association parallels the narrative of American culture and aesthetics.

The Game Room within the Chicago Athletic Association embraces the spirited play and athletic qualities inspired by the club's historical past. As a focal point of the hotel's public spaces, the Game Room is comprised of classic recreational activities such as bocce ball, billiards, shuffleboard, and chess. The space has been designed to highlight leisurely play, including an installation of vintage pool cues above the bar, a playful mural of athletic characters by LAND—a well-known artist collective from Austin, Texas—and an oversized, original Chicago Athletic Association crest. Within the Game Room, Land and Sea Dept.—renowned for restaurants like Longman & Eagle and Parson's Chicken & Fish—offers a playful menu of imaginative items that nod to familiar concession classics, alongside regional snack and street food favorites. The drink menu includes Beverage Director Paul McGee's take on classic cocktails, a selection of draft and bottled beer, and a curated wine list. 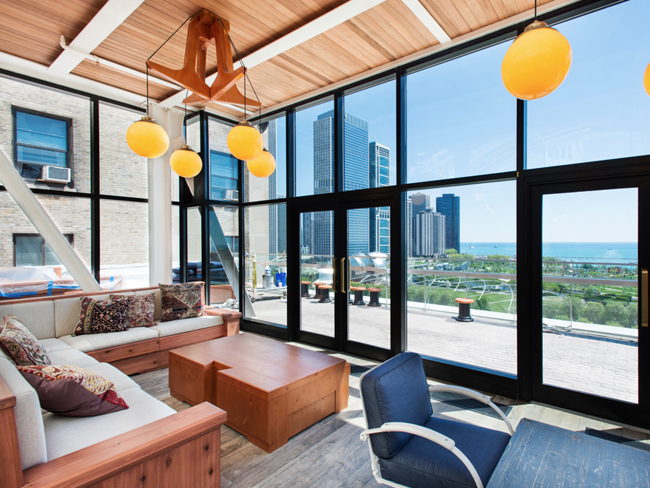 The Chicago Athletic Association Hotel has some of the country's best culinary talent behind its unique restaurant and bar outlets, including Cindy's, the hotel's 13th-floor rooftop bar and shared plates restaurant; Cherry Circle Room, a reinvention of the iconic establishment from the original social club; Shake Shack; and a boutique cafe by Vosges Haut-Chocolat, the Chicago-born haute-chocolatier. Another concept, Milk Room, offers an eight-seat micro bar serving elevated cocktails utilizing rare and vintage spirits.

One of the most impressive restorations occurred in the White City Ballroom on the building's eighth floor—a space that offers sweeping views of the parks and Lake Michigan. Working off decades-old photographs, a team of plasterers recreated the room's original ceiling, complete with more than 160 delicately ornamented plaster "stalactites." Though the building offers 17,000 square feet of event space, the White City Ballroom is sure to capture the greatest interest from those looking to marry and entertain.

After less than a week in business, the Chicago Athletic Association Hotel has already earned broad acclaim and a glowing review from Chicago Tribune architecture critic Blair Kamin, who deemed the project a triumph "not just of historic preservation, but contemporary reinvention." However, even the best words and photographs cannot capture the experience of the Loop's newest hotel. To truly appreciate its grandeur, you need to make a visit.

To ensure that the architecture of the clubhouse appealed to its clientele, CAA founders called upon Massachusetts-born architect Henry Ives Cobb to lead the design. If his name doesn’t sound familiar, it’s likely because many of Cobb’s notable works, including the castle-like Palmer Mansion on Lake Shore Drive and controversial Chicago Federal Building at Dearborn and Adams, were demolished before the preservation movement had firmly taken root in Chicago. Today, structures like the Newberry Library and historic Harriet F. Rees House, which recently made headlines after it was transplanted to a location further down the street, stand as testaments to Cobb’s accomplished career.