2 MIN READ - Mayor Lori E. Lightfoot, city and community leaders announced on June 15 the winner of the City of Chicago’s C40 Reinventing Cities competition. The property is a 20-story, 100 percent affordable high-rise that will create a “stunning transformation” of underutilized Loop land.

The $102 million, 20-story structure planned by The Community Builders for City-owned property at Van Buren Street and Plymouth Court was selected through a Department of Planning and Development (DPD) Request for Proposals (RFP), issued last year through the international C40 Reinventing Cities competition. 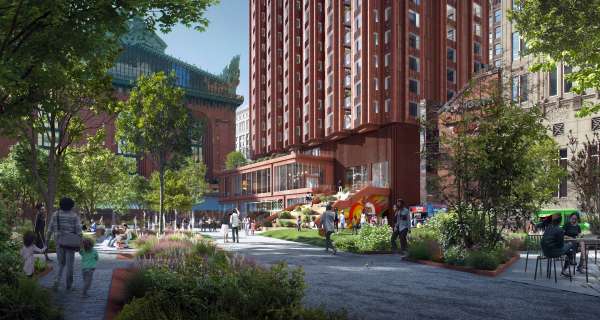 Designed by Studio Gang with DesignBridge and JAQ Corp, the “Assemble Chicago” project was selected over three other net-zero, mixed-use proposals due to its superior design, commitment to affordability, family-sized units, development team experience, proposed purchase price, and community feedback, among other factors.

Each proposal was reviewed during a May community meeting prior to being evaluated by a City of Chicago and community-represented selection committee.

The project’s planned 207 rental units will range from studios to two-bedrooms and be priced for tenants earning 30 to 80 percent of the Chicago area median income (AMI). That 30 percent figure equates to $28,000 for a household of four.

Located at the nexus of multiple rapid transit lines, the building will include a two-level podium with a food hall for minority-owned restaurants, nonprofit office and meeting space, a produce grocer, and a wellness clinic.

The project will also support approximately $2 million in improvements for Pritzker Park, which will be reconfigured and integrated into the adjacent site improvements. Upgrades will include a spray fountain, community stage, rain garden, extensive landscaping, and restrooms. Details will be finalized through a Chicago Park District-led community engagement process.

The project is expected to generate approximately 530 temporary and permanent jobs. The site is currently occupied by a vacant parking garage and vacant land.

The property, recently appraised at $7.95 million, would be sold to the Community Builders for $1, pending approval by City Council. Zoning and other project considerations may also be subject to Council approval. Groundbreaking could occur later this year.

Which Chicago neighborhood is growing the fastest?

3 MIN READ – The preliminary design concepts for a rebuilt State/Lake ‘L’ station in the Loop, the latest marquee project in the modernization of the nation’s second-largest transit agency, has been unveiled. Learn more

What's new in the Loop

4 MIN READ – If you’re coming #BackInTheLoop for the first time since the start of the COVID-19 pandemic, here’s what’s new. Learn more
Can't find what you're looking for?
Get travel inspiration, tips and exclusive offers sent straight to your inbox.