Posted  15 months ago  in  Trending, Arts and Culture

4 MIN READ – Broadway In Chicago is pleased to announce the Pre-Broadway Premiere of Paradise Square. This bold and uncompromising new musical, which examines a remarkable yet virtually unknown moment in American history, will play a strictly limited engagement from November 2 - December 5, 2021, at Broadway In Chicago’s James M. Nederlander Theatre. Paradise Square will be the first major Pre-Broadway show to raise its curtain in Chicago after the prolonged closure of live theatre due to the global pandemic.

Casting and Broadway theatre and dates will be announced shortly.

New York City. 1863. The Civil War raged on. An extraordinary thing occurred amid the dangerous streets and crumbling tenement houses of the Five Points, the notorious 19th-century Lower Manhattan slum. Irish immigrants escaping the devastation of the Great Famine settled alongside free-born Black Americans and those who escaped slavery, arriving by means of the Underground Railroad. The Irish, relegated at that time to the lowest rung of America’s social status, received a sympathetic welcome from their Black neighbors (who enjoyed only slightly better treatment in the burgeoning industrial-era city). The two communities co-existed, intermarried, raised families, and shared their cultures in this unlikeliest of neighborhoods.

The amalgamation between the communities took its most exuberant form with raucous dance contests on the floors of the neighborhood bars and dance halls. It is here in the Five Points where tap dancing was born, as Irish step dancing joyously competed with Black American Juba. 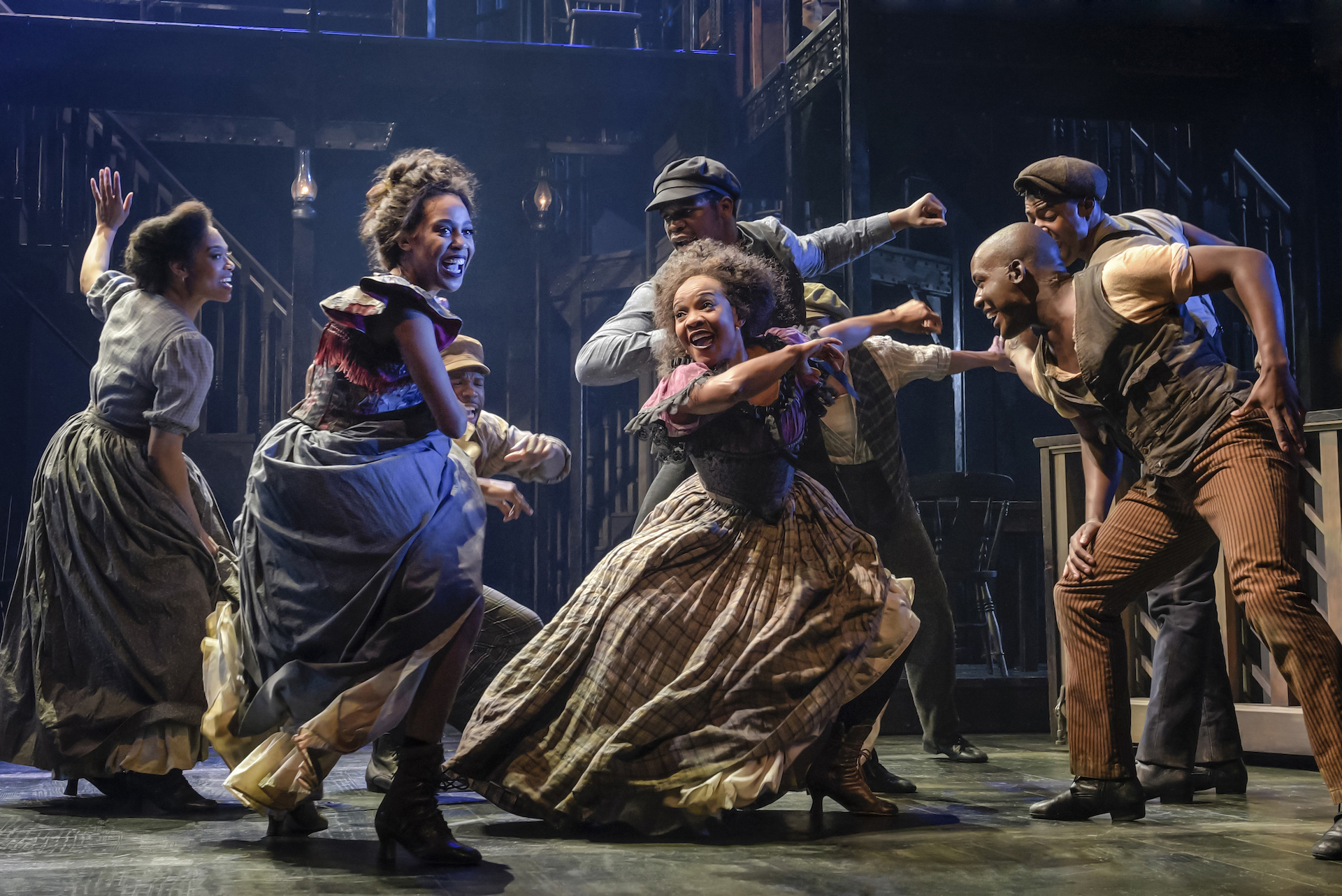 But this racial equilibrium would come to a sharp and brutal end when President Lincoln’s need to institute the first Federal Draft to support the Union Army would incite the deadly NY Draft Riots of July 1863.

Within this galvanizing story of racial harmony undone by a country at war with itself, we meet the denizens of a local saloon called Paradise Square: the indomitable Black woman who owns it; her Irish-Catholic sister-in-law and her Black minister husband; a conflicted newly arrived Irish immigrant; a fearless freedom seeker; an anti-abolitionist political boss, and a penniless songwriter trying to capture it all. They have conflicting notions of what it means to be an American while living through one of the most tumultuous eras in our country’s history.

The distinguished creative team for Paradise Square features direction by two-time Tony Award nominee Moisés Kaufman (I Am My Own Wife, The Laramie Project), choreography by two-time Tony Award winner Bill T. Jones (Spring Awakening, Fela!), and a book by Christina Anderson (Good Goods, Inked Baby), Marcus Gardley (The House That Will Not Stand), Craig Lucas (The Light in the Piazza) and Larry Kirwan (lead singer of Black 47). Ten-time Tony Award nominee Graciela Daniele (Ragtime, Once on This Island) will provide musical staging, in collaboration with Kaufman and Jones.

The score of Paradise Square is by the team of Grammy and Emmy Award winner Jason Howland(Beautiful: The Carole King Musical, Little Women - The Musical) and Nathan Tysen (Amélie, Tuck Everlasting), with additional material provided by Masi Asare (Monsoon Wedding, The Family Resemblance) and Mr. Kirwan. The musical features original songs as well as a reimagining of the songs of Stephen Foster, who was writing and living in the Five Points at the time.

The world premiere of Paradise Square was produced in January 2019 by Berkeley Repertory Theatre. The musical is based on Hard Times, originally conceived by Mr. Kirwan, which was originally presented at the intimate Off-Broadway theatre, Nancy Manocherian’s the cell, in 2012.

With visceral and nuanced staging and choreography that captures the pulsating energy when Black and Irish cultures meet, Paradise Square depicts an overlooked true-life moment when hope and possibility shone bright.

All Broadway In Chicago schedules and productions will continue to be reviewed as further guidance and recommendations are provided by the CDC, State of Illinois, and Chicago Departments of Health.  For the latest health and safety procedures and guidelines visit BroadwayInChicago.com/COVID19.