As the only museum in the region dedicated to the exhibition of photography, many works in the Museum of Contemporary Photography (MoCP) at Columbia Chicago are emblematic of the Midwest, as well as the city of Chicago itself. Here are five highlights from the MoCP collection that exemplify the spirit of the Chicago Loop, including its architectural standouts and definitive bustling energy. 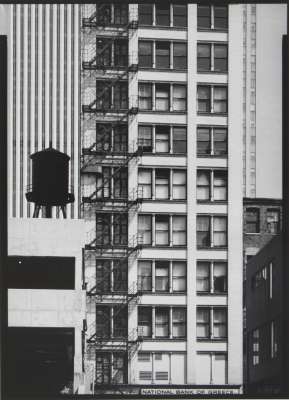 For more than fifty years, Barbara Crane has worked as a photographer creating highly formal, often abstracted images of a wide array of subjects including people, natural objects, and the urban landscape. This image embodies the subtle abstraction and beauty inherent in even the most ordinary architecture in Chicago’s Loop. 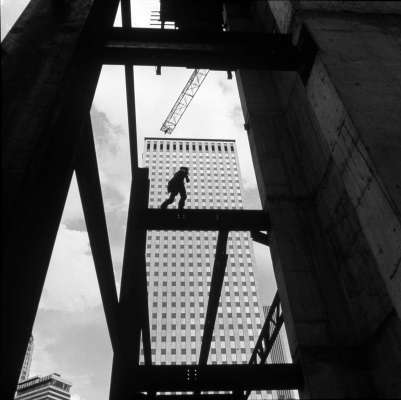 In the late 1980s, Susan Crocker photographed at various construction sites in Chicago's Loop, focusing on the ironworkers, also known as the ‘raising gang,’ who construct the skyscraper's steel skeletal structure at astounding heights. In her photographs, the visual excitement of this unusual environment is paired with an interest in the human element, which balances between a sense of machismo and an awareness of the precariousness and danger inherent in this particular line of work.

For the Changing Chicago documentary project in the late 1980s, John Kimmich Javier photographed on the streets of the Loop, in the heart of the city. His pictures reflect the diversity of people who gather there, both in terms of their backgrounds and professions; but, "at the simplest level," as Kimmich Javier has stated, "the photographs are a record of passing time, a fraction of a second, in the ever-changing Chicago."

The Museum of Contemporary Photography commissioned Vera Lutter in 2001 to turn rooms in Chicago office buildings into camera obscuras and photograph Chicago's downtown. Chicago's buildings have long been photographed – this vertical city on the prairie, with its blocks of abstract grids, has held great attractions for the camera – and Lutter's pictures, with their sweeping verticals and repeated rectangles, play up these aspects. The Chicago photographs show the presence of old and new buildings, compressed into a grid of overlapping planes. 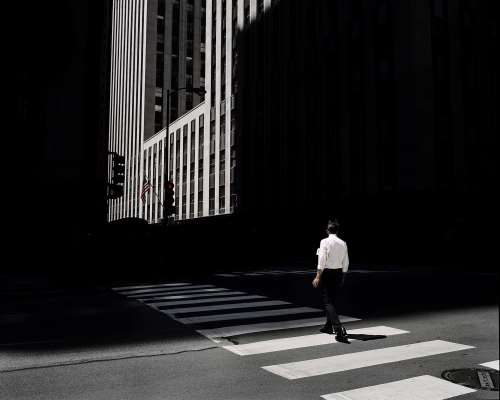 For her City Space series (2011-16), Clarissa Bonet observes and takes note of chance encounters and interactions she witnesses between strangers on the streets of downtown Chicago. Initially recording the interactions with her iPhone, in what she calls “sketches,” Bonet later restages the moments, carefully setting up her location, lighting, and models to recreate the scene. The resulting pictures portray mundane exchanges as dramatic, with individuals anonymously and solitarily navigating a confounding urban terrain.

The Museum of Contemporary Photography at Columbia College Chicago boasts a collection of over 14,000 photographic objects, including works by some of the most influential photographers in history, like Edward Steichen, Ansel Adams, Dorothea Lange, Robert Frank, Harry Callahan, Yasuhiro Ishimoto, Cindy Sherman, and Carrie Mae Weems, among many others.