Posted  4 months ago  in  Trending

The first weeks of autumn brought more workers back to the office, as students returned to school and summer vacations ceased. Office occupancy reached a record recovery rate the week of September 26. Adversely, hotel occupancy and pedestrian impressions dipped as families returned to daily activities of work and school, and as business travel continues to gradually recover. Both public transportation and parking note growth as office workers and leisure activities fuel activity downtown. The holiday season provides an expectation that tourism will drive these diminishing metrics towards recovery as the year closes. The remainder of 2022 recovery will be tracked in a quarterly report published in early 2023.

“The summer’s end is always bittersweet, but we look forward to the change in both season and energy in Chicago,” said Michael Edwards, President and CEO of Chicago Loop Alliance. “While business travel, which is typically a large driver for hotels and pedestrian activity in the fall, continues to make a slower return, the Loop is shifting towards other aspects of a dynamic area. The new theater season; alluring exhibitions at local arts institutions like the Art Institute of Chicago; growth in the residential landscape; and a moderate introduction of new retail is shaping a downtown experience that will be more resilient.”

As summer waned, tourism tapers off in the Loop meaning that many of the pedestrians that filled the streets over the summer may be returning home to their own neighborhoods. While office workers continue to trickle back to a more in-person hybrid schedule, the decline in tourists in the Loop is likely a main driver of the dip in pedestrian activity this month.

However, as the Loop looks towards a more mixed-use future, pedestrian activity is likely to continue to improve. A more robust residential market along with entertainment, restaurants, bars, and in-person events will likely contribute to a more vibrant and resilient Chicago Loop. While pedestrian counts are expected to ebb and flow in the next few months, the holiday season is expected to boost pedestrian numbers back towards higher recovery numbers in the near future.

“The amazing attractions and amenities in our downtown Loop area are a huge reason why Chicago keeps being recognized as the Best Big City in the US,” said Lynn Osmond, President and CEO of Choose Chicago. “This summer, I was thrilled to see that we had the highest levels of hotel occupancy and pedestrian activity since the pandemic began. While pedestrian activity slowed a bit in September as the summer came to a close, I am excited for the upcoming holiday season and the continued return of tourists and locals to Chicago’s thriving Loop area.” 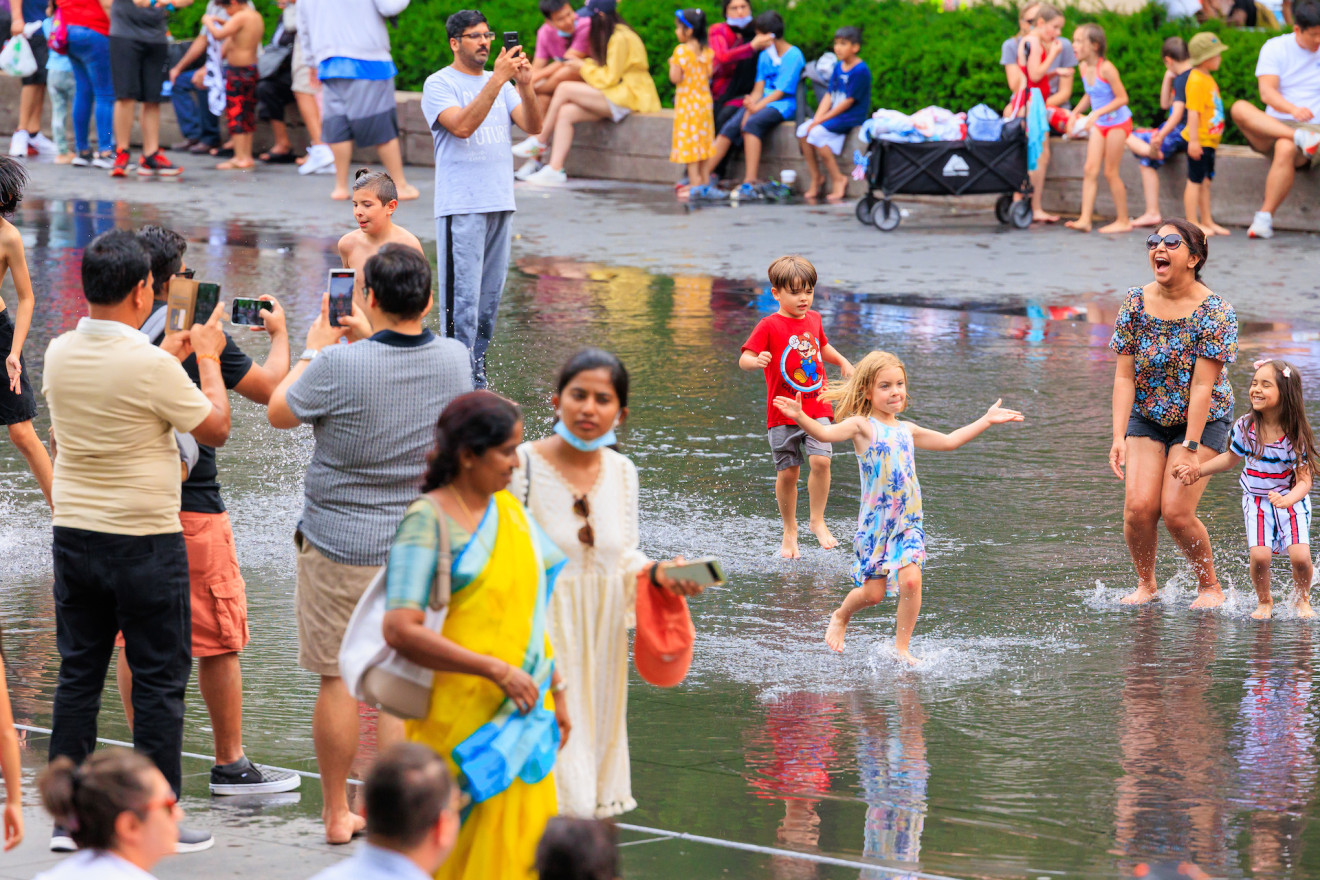 Hotel occupancy saw a dip this month after a strong summer. This is most likely due to the winding down of summer tourism as many children go back to school and family vacations are wrapping up. Additionally, because business travel has not fully returned, hotel occupancy may continue to stagnate until the holiday season when tourism picks back up.

While leisure tourism is still a main driver of hotels in the Michigan Avenue and State Street corridors, hotels in the eastern part of the Loop rely on business travel. Regardless, hotel occupancy has improved 48 percent since last year at this time.

Office occupancy has achieved a new milestone signaling a continued recovery of the office sector in the Chicagoland area. As fall moves into full gear, summer vacations and travel wind down which may mean more workers are coming into their offices. While hybrid schedules are here to stay, more offices are offering amenities to entice employees into more in-person office days per week.

Anecdotally, many Chicagoland area workers have been reporting full trains and buses as well as an increase in cyclists at rush hour. This may mean that improvements in public transportation and biking infrastructure throughout the city is making it more feasible for people to commute to work as pandemic lags in service are resolved. Reliable options to commute to work make coming into the office a more realistic option for many employees.

“We’ve missed the steady thrum of office workers conducting business meetings; enjoying a break with coworkers; or winding down from a long day at the office,” said Jaclyn Redoutey, General Manager of 90th Meridian. “But as an office worker centric restaurant, we are continually evolving into a dynamic establishment that is influenced by various downtown elements outside of the office – residents, leisure tourism, etc. As the Loop continues to evolve, we’re confident that the changes will create more resilient patronage.” 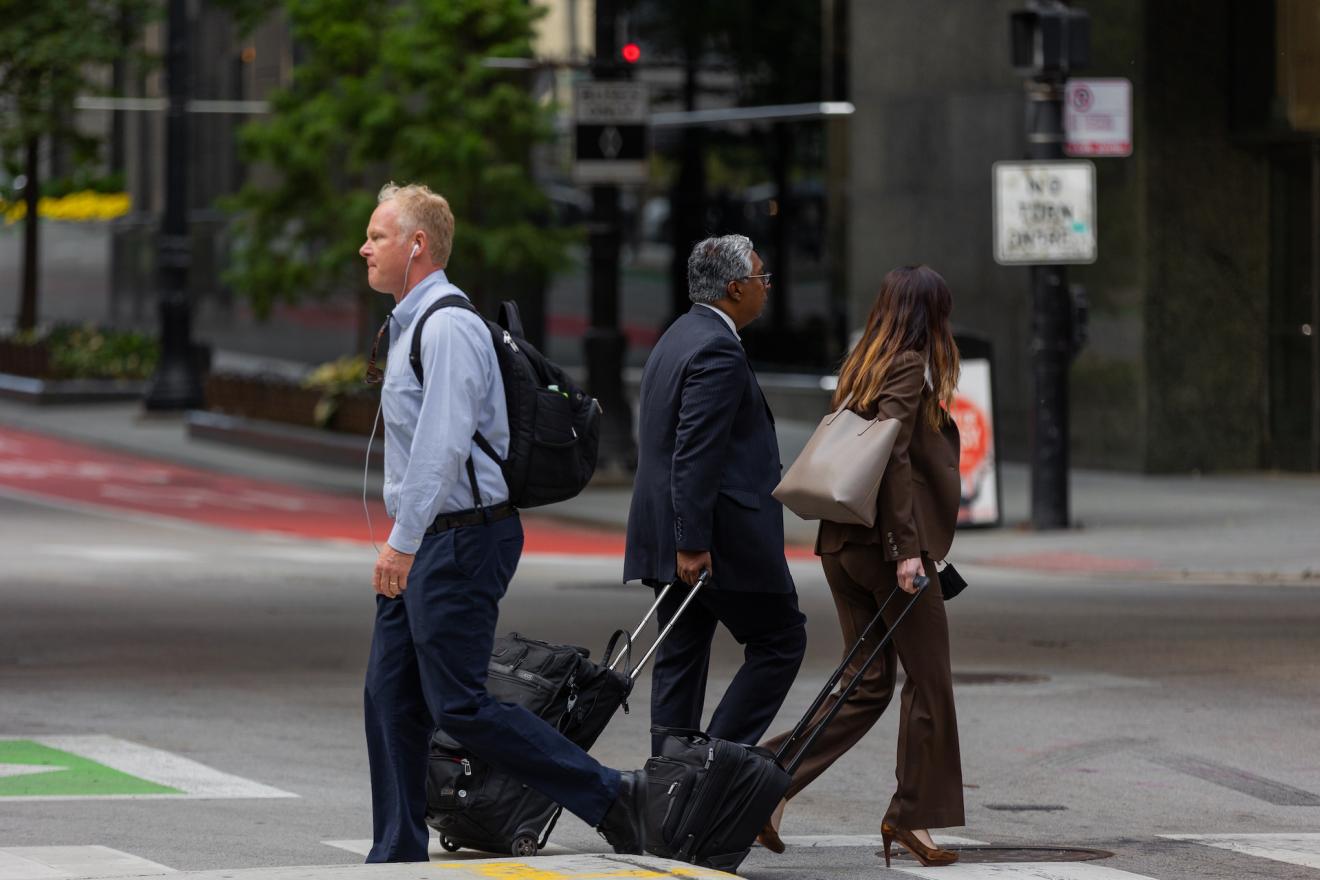 CTA ridership continued its upward trend in August. Renewed attention to the value of strong public transportation by city officials and residents has meant that the agency is being asked to improve reliability, safety, vibrancy, and cleanliness. With the continued roll out of new trains and buses as well as programs like “First Day, Free Rides”, the agency is aiming to address these issues to improve service.

Additionally, the CTA has launched various goodwill tactics to improve public perception of trains and buses. To commemorate 75 years of service, the CTA showcased its fleet of heritage trains to the public. CTA stations across the city are also being adorned with new art installations to celebrate neighborhood character and pride.

Due in part to a recovering office sector, Metra has hit a new milestone in ridership. As vehicle traffic continues to worsen and gas prices begin to increase again, commuters from the suburbs to the Loop may be choosing to take the Metra. With improved and consistent arrival and departure times, commuters can count on the Metra to arrive at their destination on time.

Over the past three months, the agency has reported over 2,000 passenger trips per month signaling a consistent increase in recovery metrics. Metra has also rolled out major campaigns to boost ridership including their $100 Super Saver Pass program, which the agency reported selling 24,000 of in August. Campaigns like this improve access and are expected to boost ridership in the coming months.

Parking in the Loop continues last month’s trends with a slight decrease in monthly parking pass reservations while single parking reservations remain stable. This is expected thanks to hybrid work schedules and the flexibility offered by single reservation style parking.

For those Loop workers who continue to return downtown, Chicago Loop Alliance has created a Back to Office Toolkit that can be found at LoopChicago.com/BackToOffice. The toolkit includes insider tips for working downtown in the Loop for those who never left, as well as those who are returning or want to stay in the know. Find useful information on how to safely get downtown; what’s new in the Loop; what the Loop looks like these days; lunch and happy hour spots; and more. 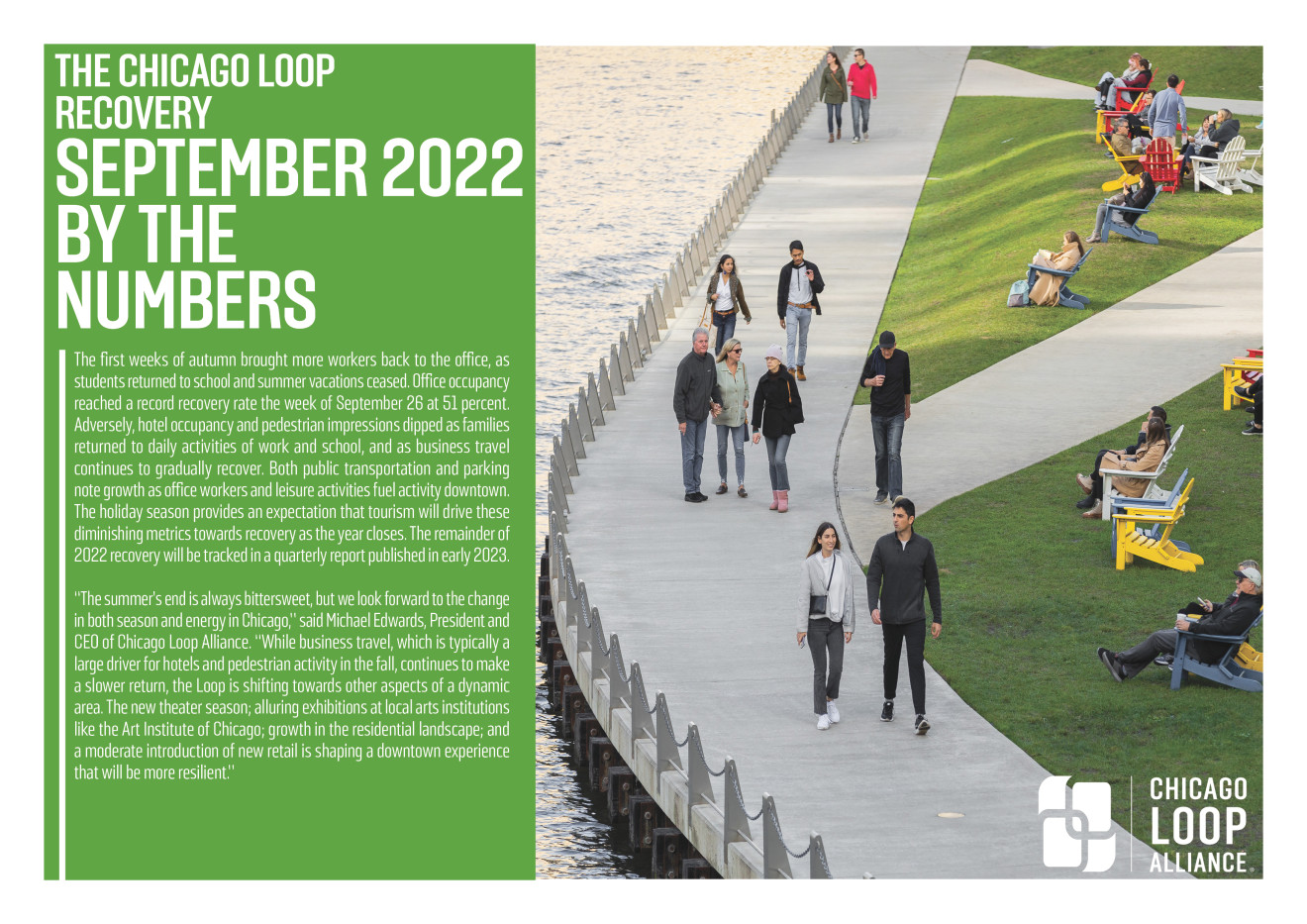 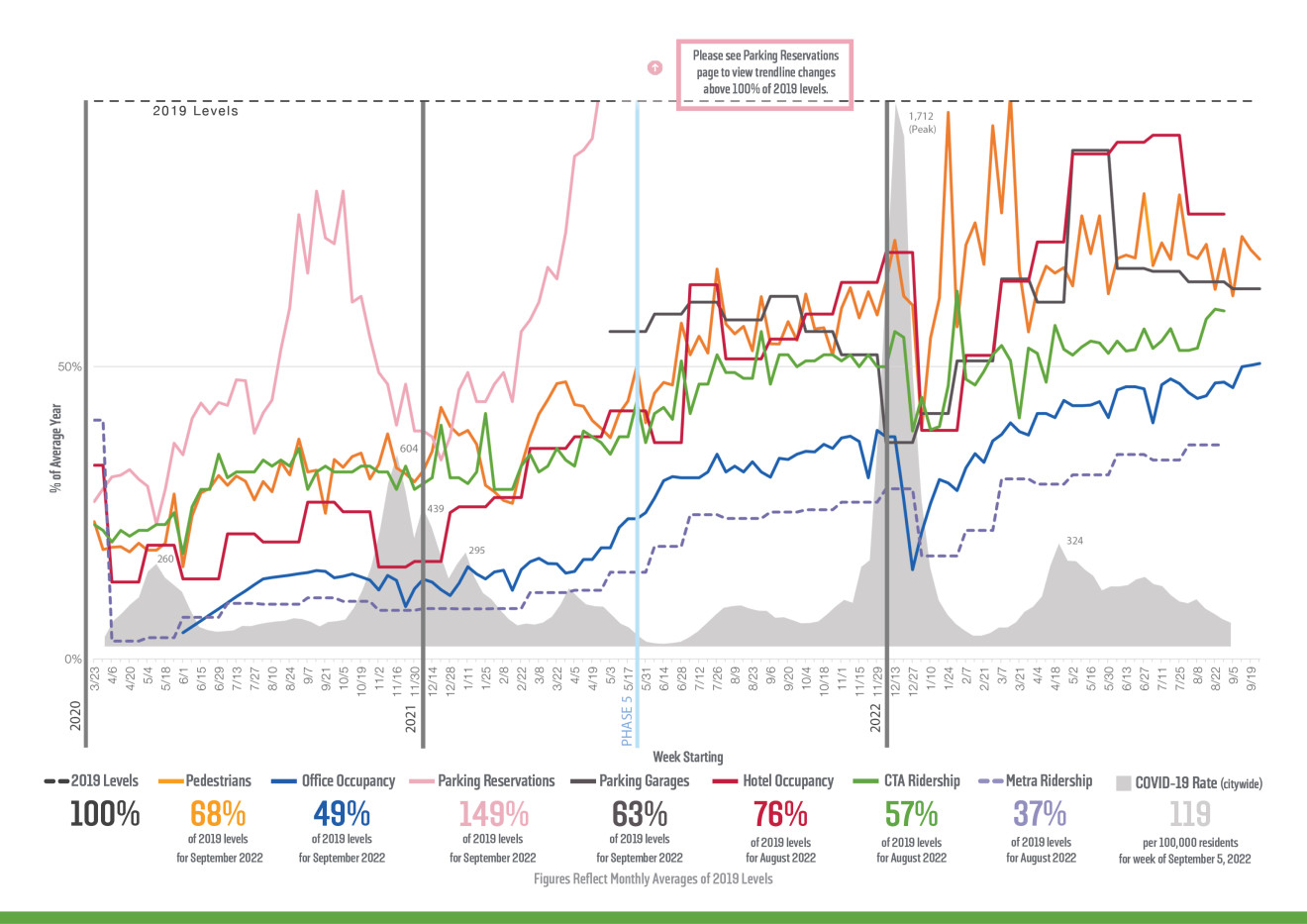 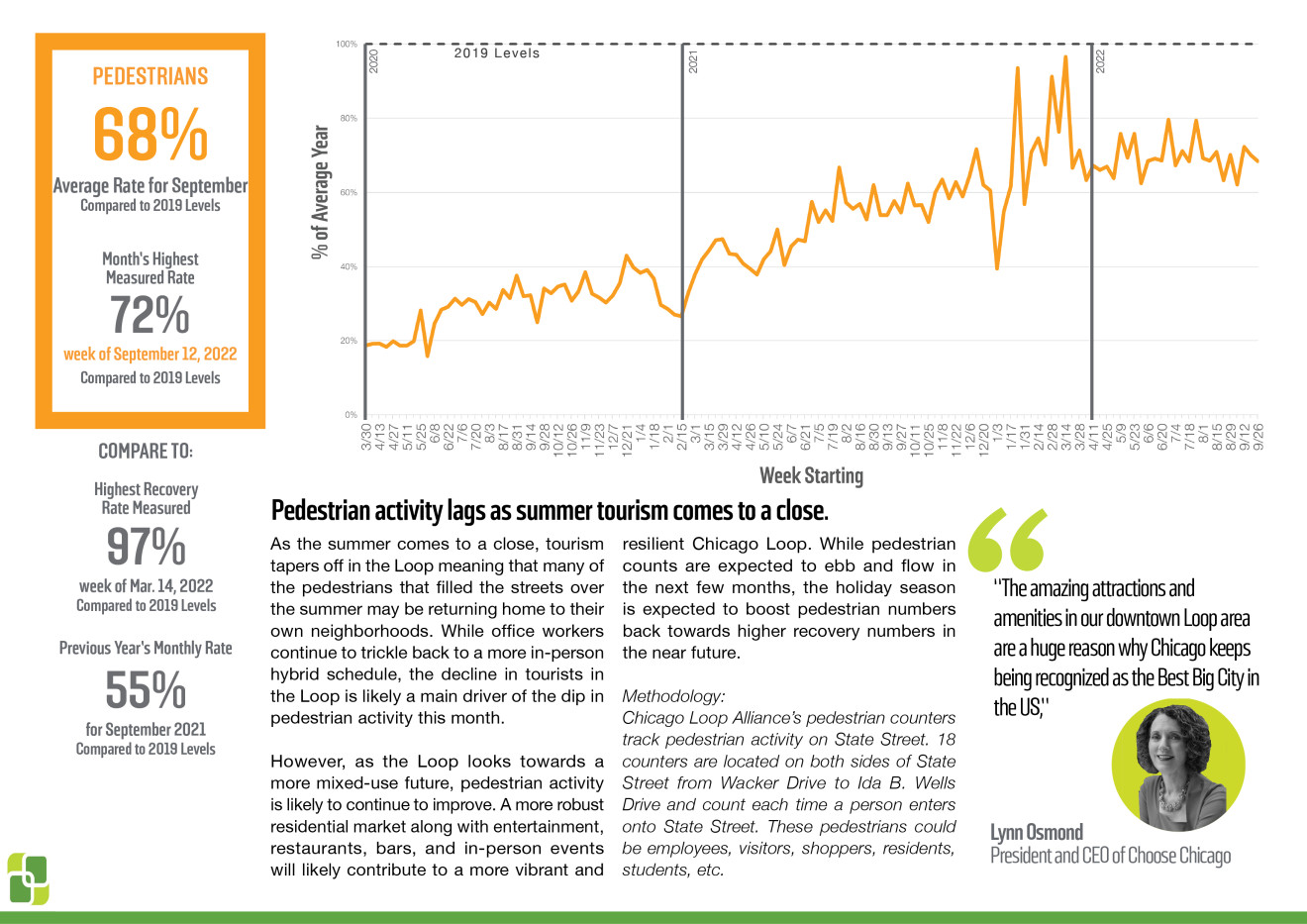 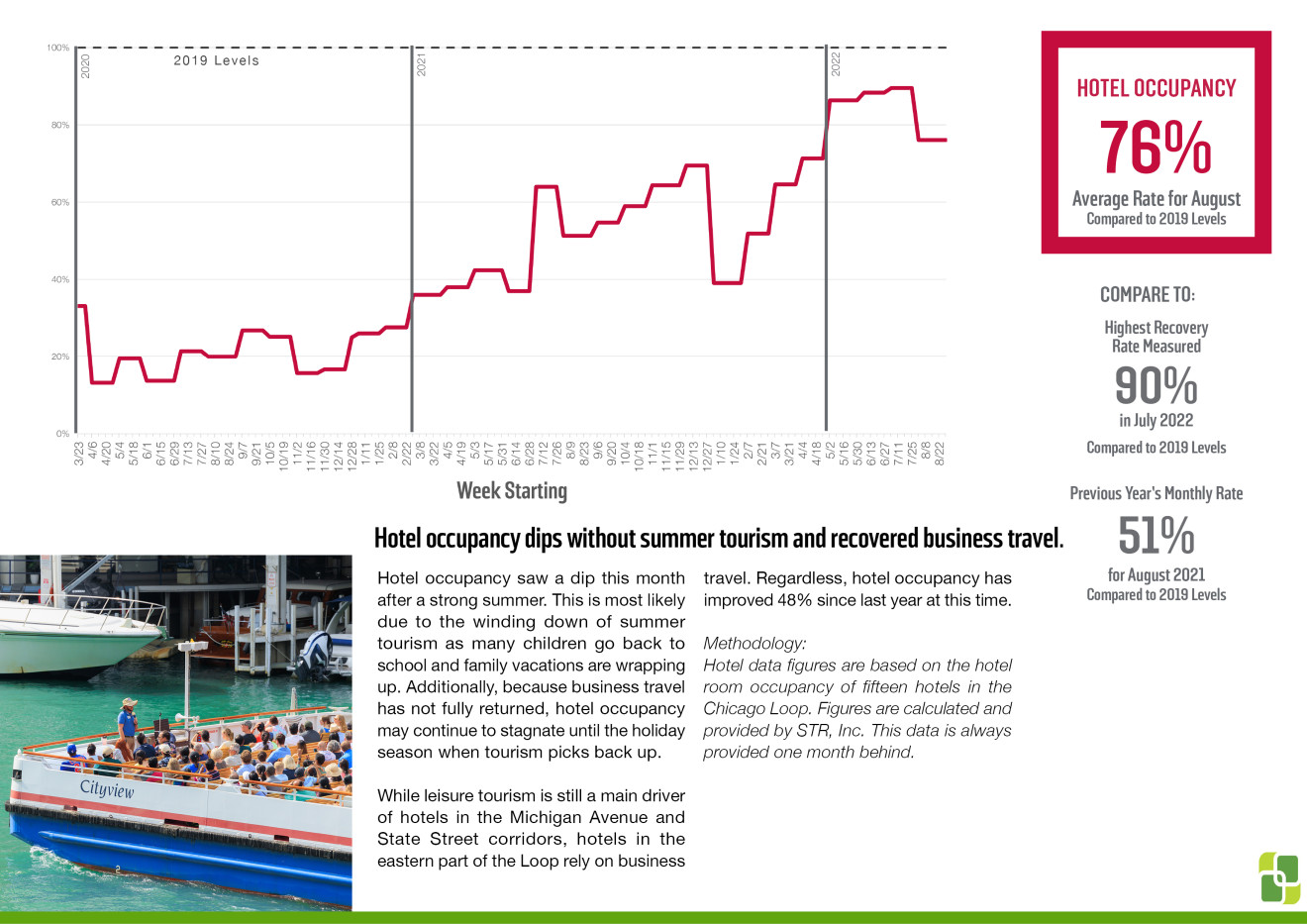 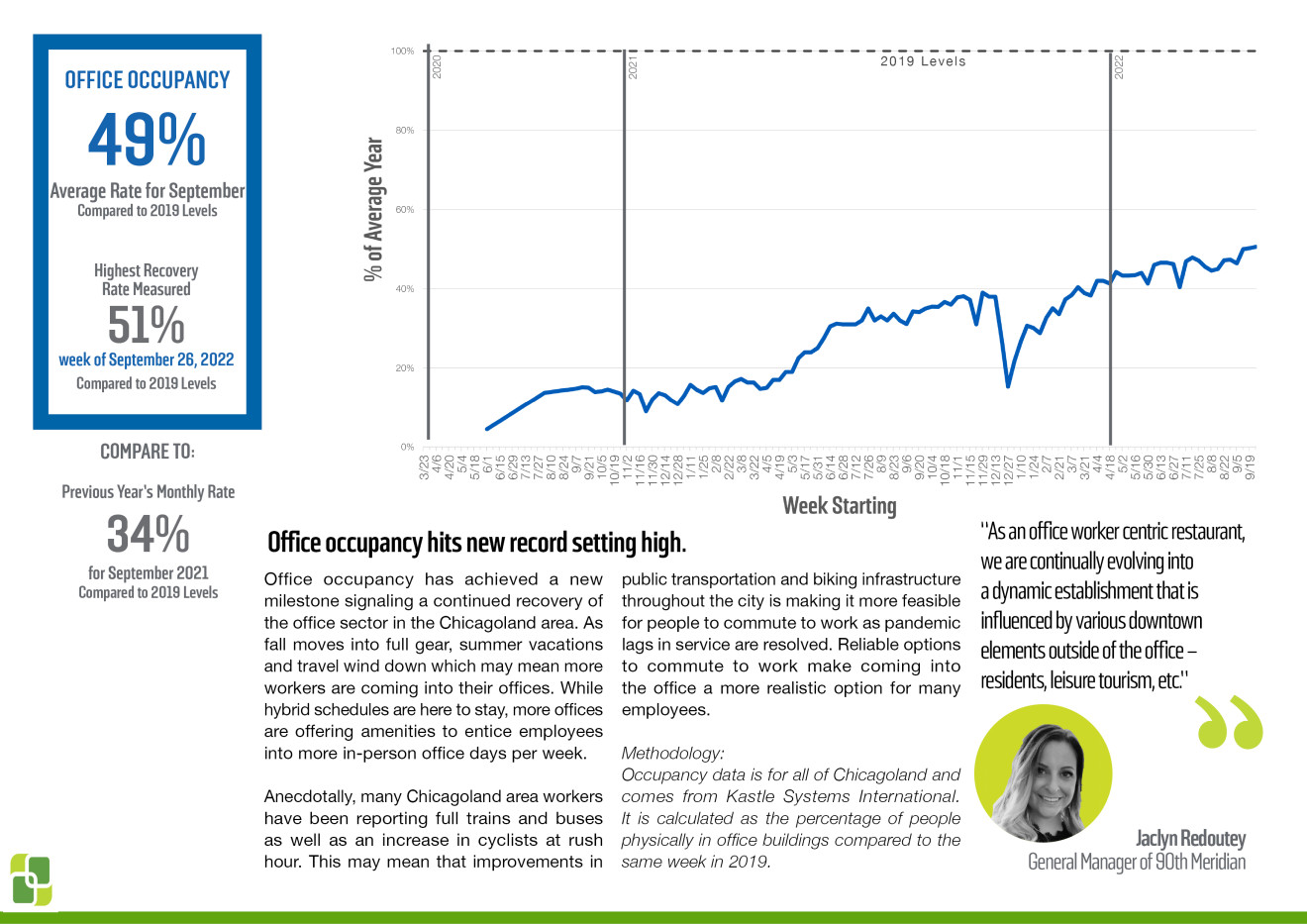 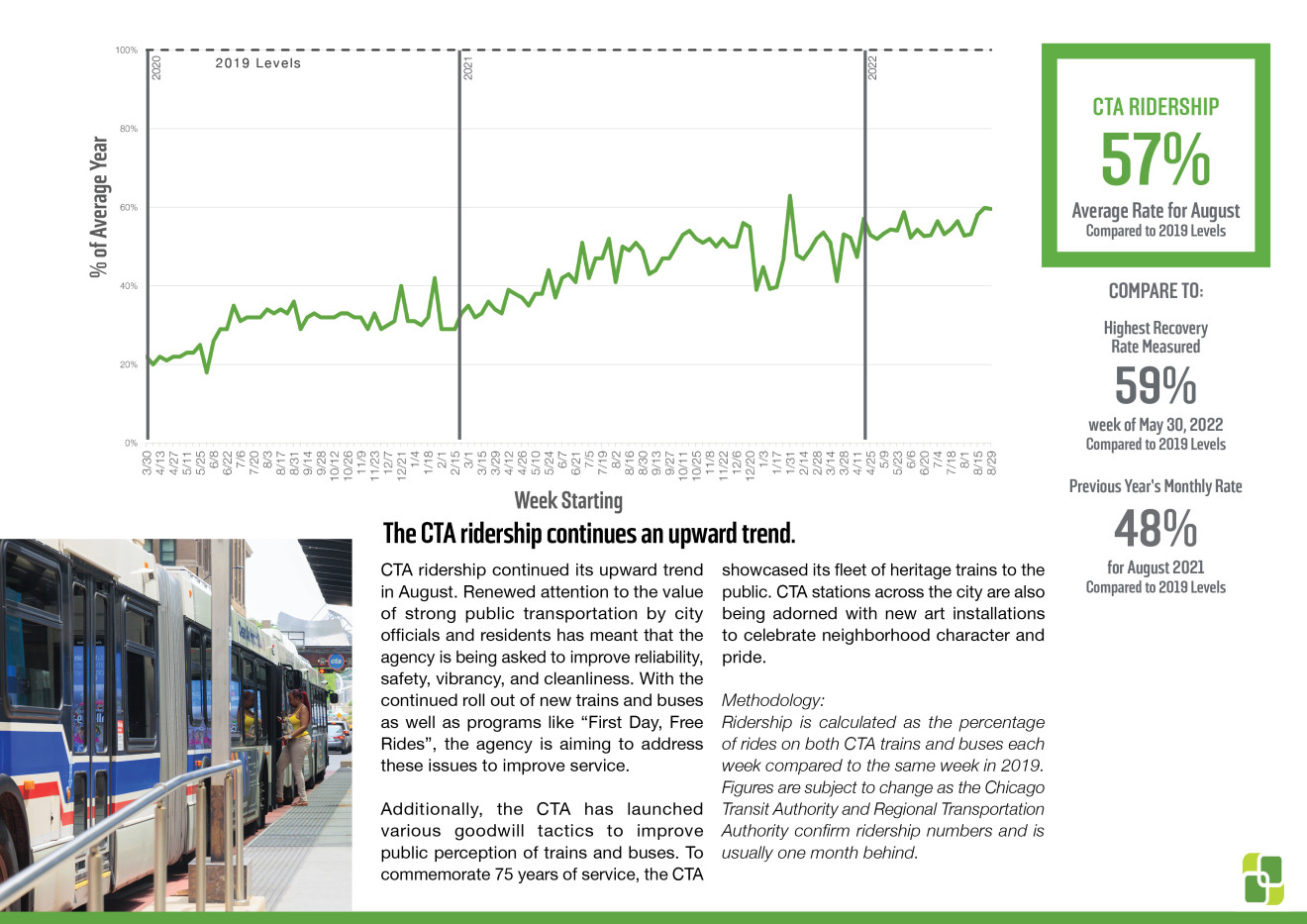 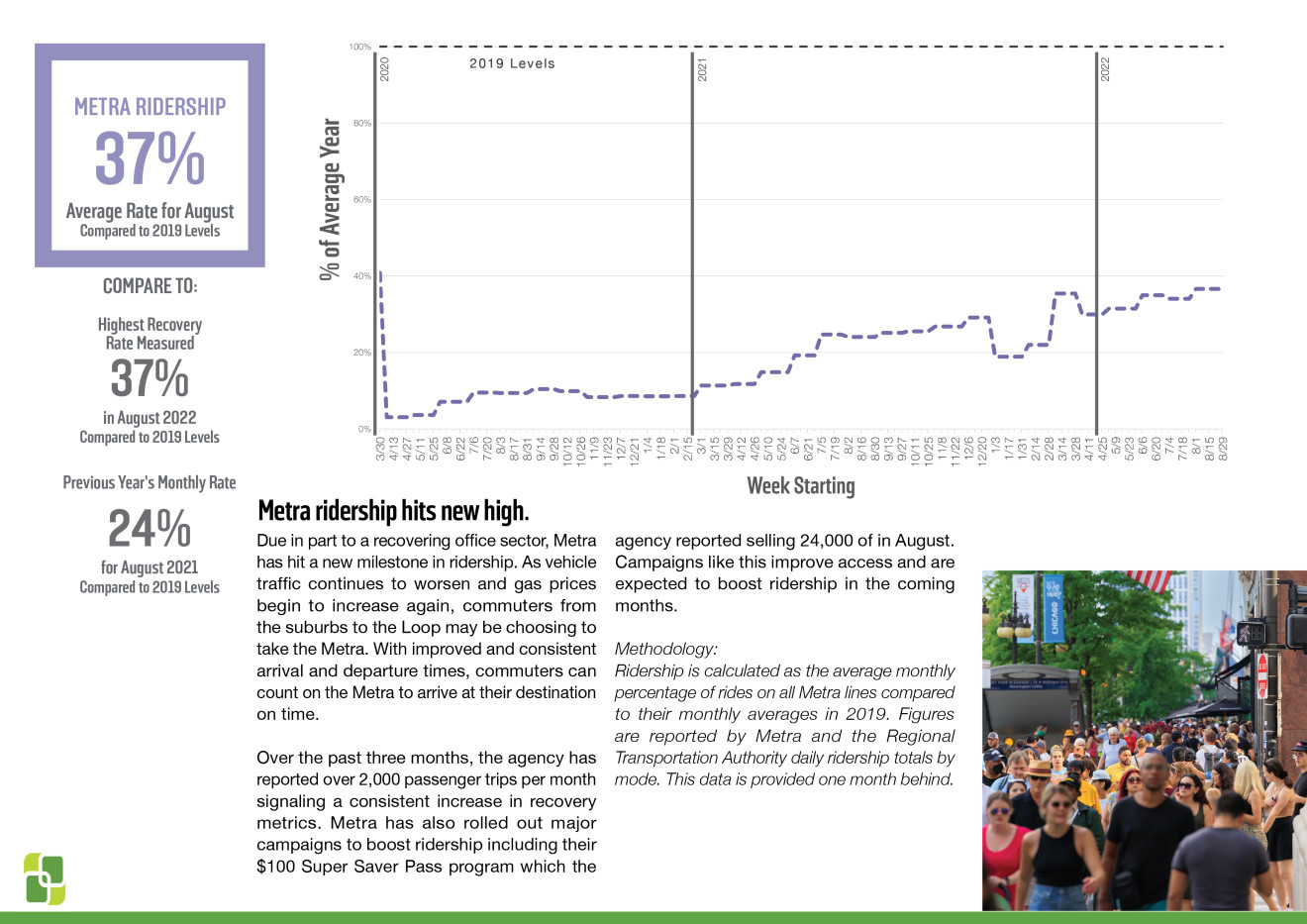 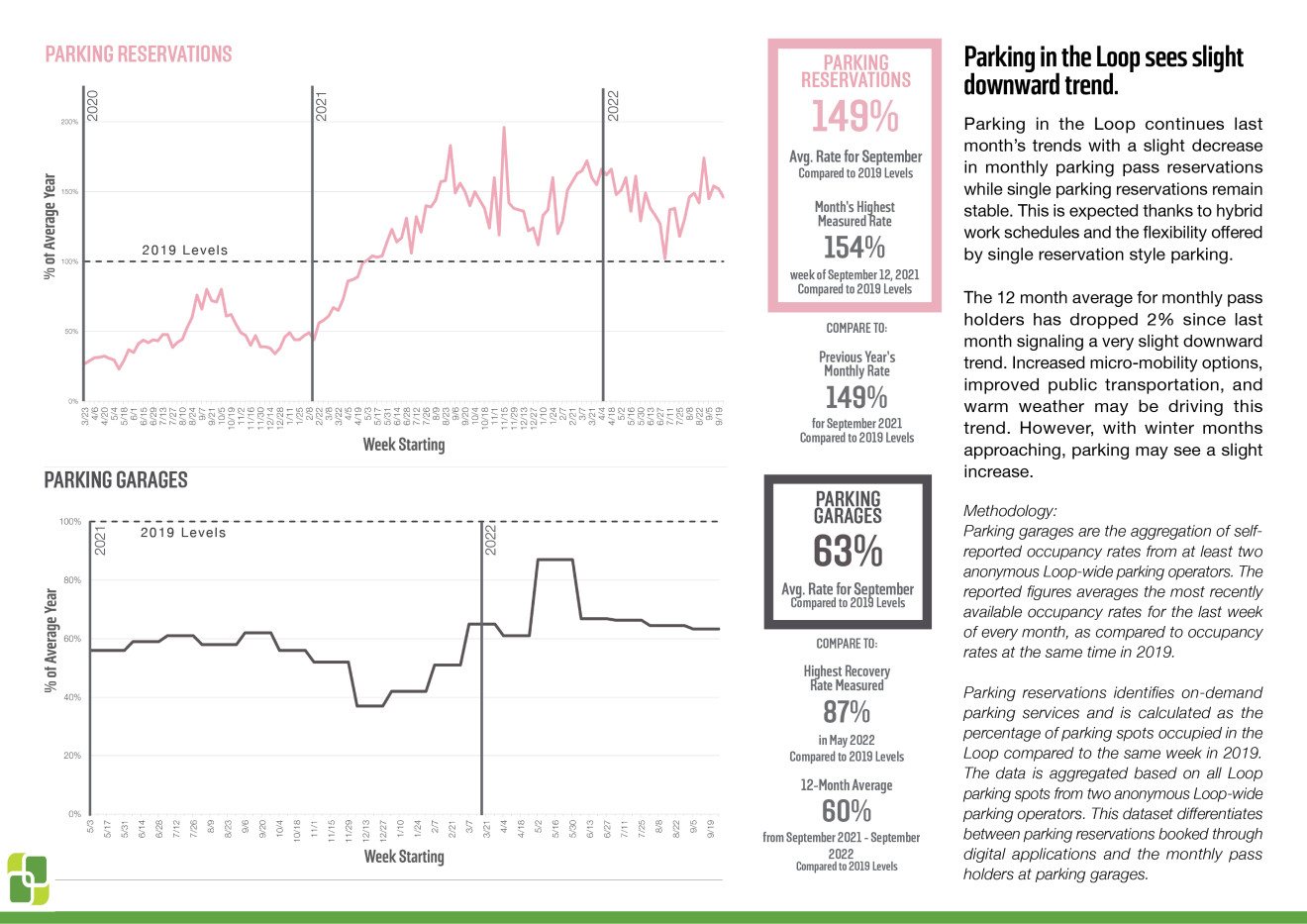 3 MIN READ – Chicago has been named the Best Big City in the U.S. for the sixth straight year by Condé Nast Traveler through their 2022 Readers’ Choice Awards. Learn more

To help you better understand the status and operational plans of Loop businesses, Chicago Loop Alliance has surveyed stakeholders and collected other data monthly since July 2020. Learn more

Hotel recovery in the Loop hits record numbers in August