6 MIN READ -  Following a difficult year for the travel and hospitality industry, it is with the utmost excitement that Chicago’s Palmer House, a Hilton Hotel announces its reopening after a year-long temporary closure due to the COVID-19 pandemic. The historic hotel will open doors to guests on June 17, coinciding with its 150-year anniversary, allowing it to continue its legacy as the most iconic and famed hotel in North America.

Palmer House first opened on September 26, 1871. The hotel began as an extravagant wedding gift and was immediately regarded as one of the most luxurious hotels in Chicago. Just 13 days after its grand opening, Palmer House was destroyed by the Great Chicago Fire and was later rebuilt by founder Potter Palmer.

Palmer borrowed $1.7 million to rebuild the hotel and surrounding Chicago area, developing Lake Shore Drive and reimagining State Street, the socialite couple were integral in creating the city structure as it stands today. After using their influence to rise Chicago up from the ashes, the grand hotel welcomed its first guests again on November 8, 1873. Proving its staying power through the years, the Palmer House remains a steadfast beacon of light for the city of Chicago following a challenging year. 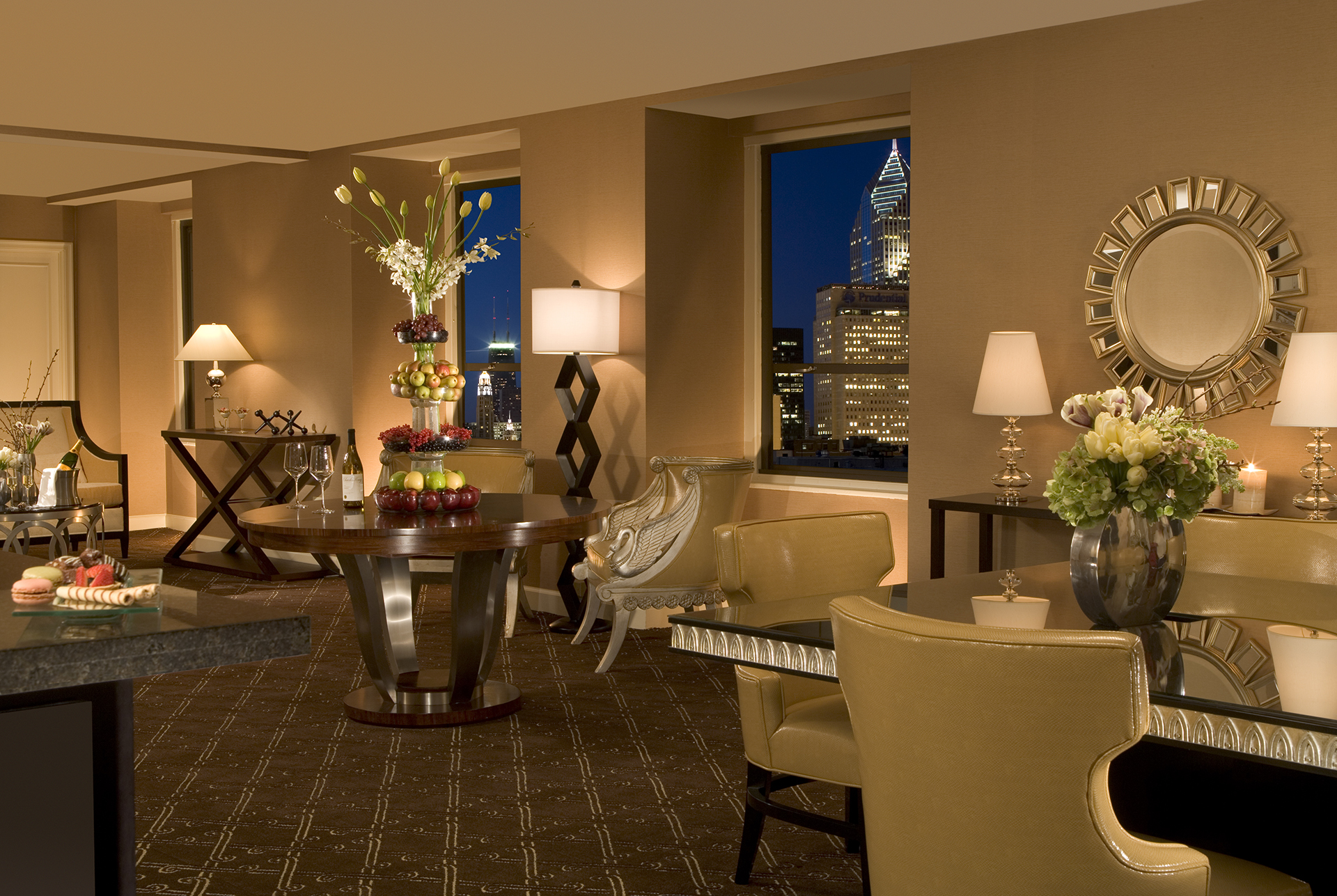 “We are incredibly proud to reopen the iconic Palmer House doors, and welcome guests back to the epicenter of Chicago’s rich history for our 150th anniversary year. Reopening a grand hotel of this stature is no easy task, in the months leading up to reopening day, the team at Palmer House vacuumed over 4 miles of carpet, changed 10,000 light bulbs, and for the first time, filled 14,600 gallons of water into our new swimming pool.” said Dean Lane, Area General Manager, Palmer House, a Hilton Hotel. “We have faced the most challenging year for the travel industry and Chicago community, but in the face of adversity, Palmer House has continued to rise like a Mythological Phoenix, allowing our legacy as one of the most iconic hotels in Chicago to live on.”

Known for many firsts and claims to fame, Palmer House is the birthplace of the original chocolate fudge brownie, the first fireproof hotel, the first to employ the vertical steam lift, which would later become the elevator, and the first hotel to use the lightbulb and telephone. The legendary Empire Room that first opened as a dinner club in 1933, quickly became one of the premier nightspots in the country having hosted performers including Liberace, Judy Garland, Ella Fitzgerald, Frank Sinatra, Phyllis Diller, and more.

Today, guests can still marvel at the striking grand lobby that dates back to Bertha Palmer befriending Claude Monet in France, where she began decorating the hotel with paintings and other artistic treasures inspired by her French heritage. The stunning features include the Tiffany & Co. 24-karat gold “Winged Angels” that weigh in at 1.25 tons each, the intricately painted ceiling that features 21 Grecian murals by French artiest Luis Pierre Rigal, the Tiffany & Co. brass door handles, 24-karat gold hinges and hardware throughout the hotel, as well as Bertha’s signature French Havilland bone china, valued at $1.8 million. 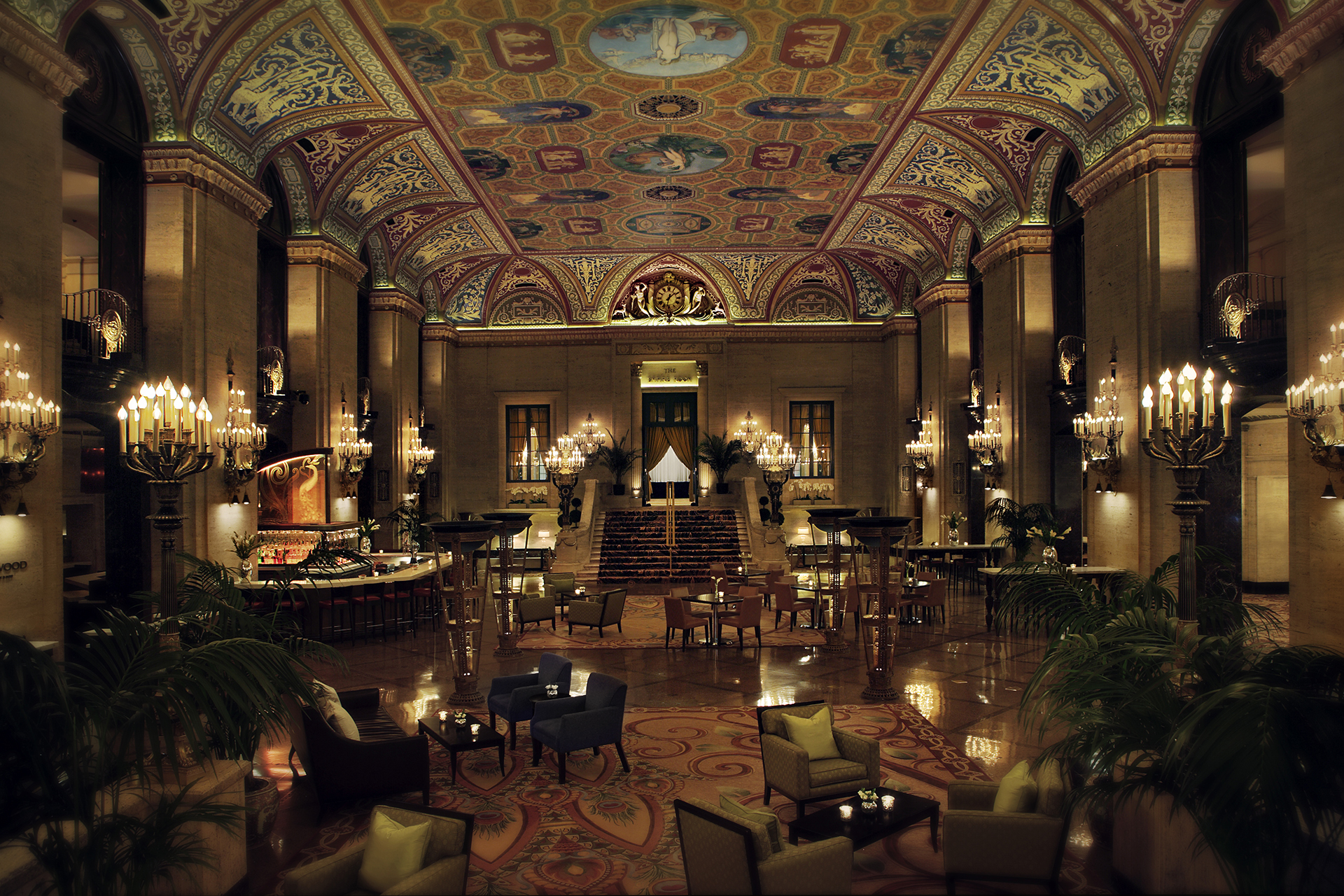 The in-house History Museum and archive opened in 2013 and features a collection of historical artifacts and findings from the hotel’s storied past. The assortment includes scrapbooks from the archives of Bertha Palmer, the beer stein used by Mark Twain to toast a historic dinner, ads from the fabled Empire Room featuring a complete dinner and star-studded floor show for $2.00, and original polaroid photography taken from the World’s Fair during its debut.

The 1,641-room hotel continues to stand as an icon within walking distance to Chicago’s cultural, business and shopping destinations such as the shops along State Street, the Art Institute of Chicago, Chicago Symphony Orchestra, and The Joffrey Ballet.

Reopening an Icon and Looking Ahead

At the lobby bar, guests will also be able to enjoy the 150th anniversary cocktail - the 1871, original recipe brownie and other elevated plates. New to Palmer House is Lockwood Express, a grab and go concept that includes daily baked pastries, Lavazza coffee and cold brew, a selection of warm artesian meals, and even small batch cocktails for travelers on-the-go. 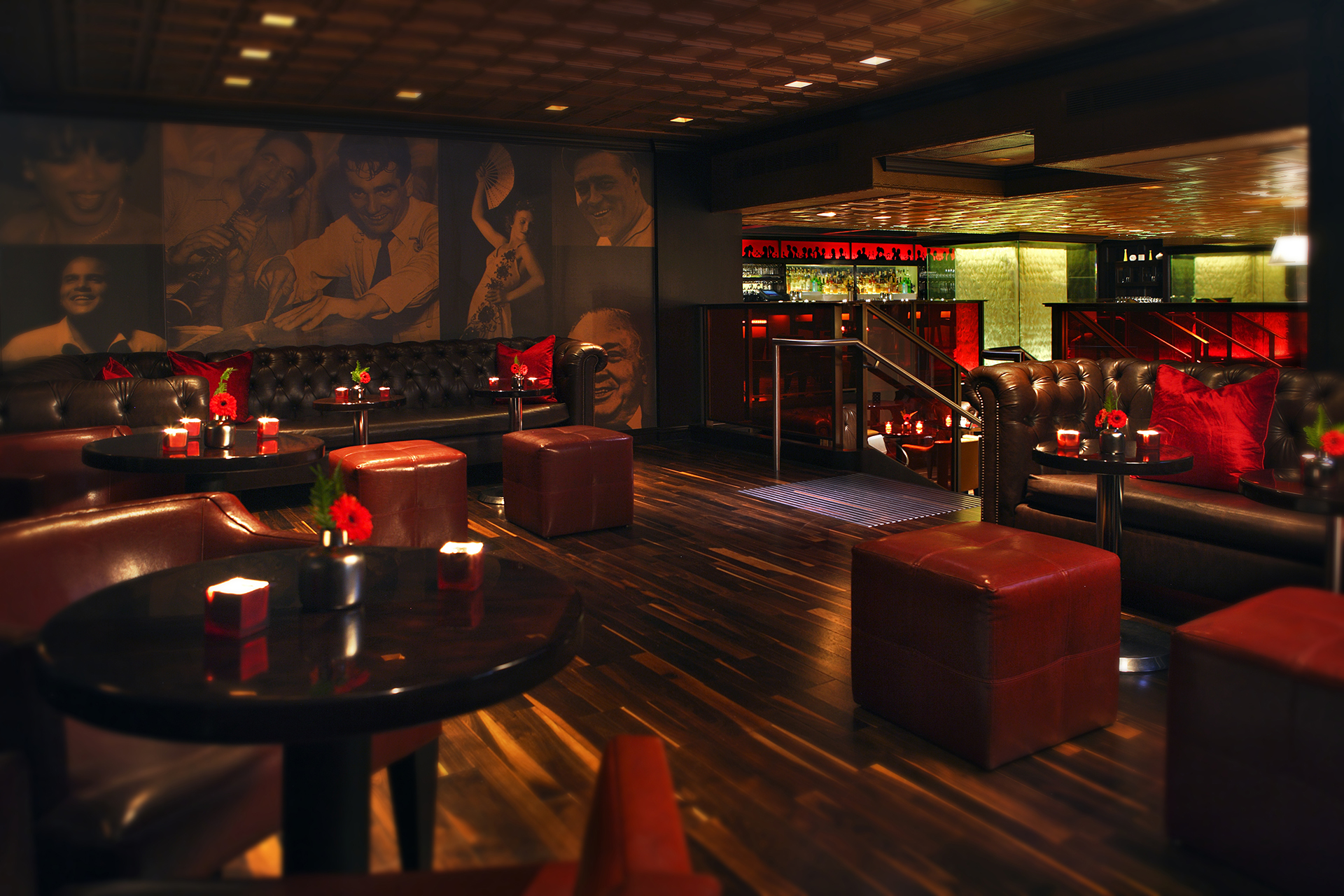 As the first guests arrive on opening day, Palmer House will feature special entertainment by famed magician Dennis Watkins of The Magic Parlor. In addition, he’ll be appearing at random with ‘surprise & delight” pop-up performance throughout opening week in the lobby. Dennis will wow guests with the classic magic and mind-reading featured in his critically acclaimed one-man-show, The Magic Parlour, which is celebrating its 10th year running at the Palmer House.

To Kick-off the re-opening during the hotel’s 150th anniversary year, Palmer House is offering exclusive over-the-top booking offers and experiences.

For those seeking extravagance, Palmer House is offering The Bertha Palmer Experience, which includes a stay in the Penthouse Suite, Black Car Service, $150.00 daily dining and cocktail credit, dedicated butler, and an array of experiences throughout the city and hotel. These experiences include an exclusive after-hours guided tour at the Art Institute of Chicago to view the French Impressionist Wing, largely assembled by Bertha Palmer’s collection; a private viewing of the hotel’s vault; private museum and archive experience; opportunity to bake the original brownie recipe in the kitchen where it was developed; private Empire Evening dinner; Magic Parlour performance; Spa at Palmer House weekly treatments and more. To top off the lavish stay, the registered guest will be named General Manager for a day and receive a key from the hotel’s opening. The Bertha Palmer Experience Begins at $150,000 per month.

The Sesquicentennial Spa-aah package offers the first 150 guests a 150-minute treatment at The Spa at Palmer House. The spa menu includes the red lacquer manicure, Honore Hydrotherapy and more. The bookable package is available throughout July at $250.00 per night.

For couples looking to add the richness of Palmer House into their nuptial bliss, the hotel is offering a Sesquicentennial Proposal Package, which includes the couple’s use of Bertha Palmer’s $30,000 per place-setting china for $150.00 per guest. 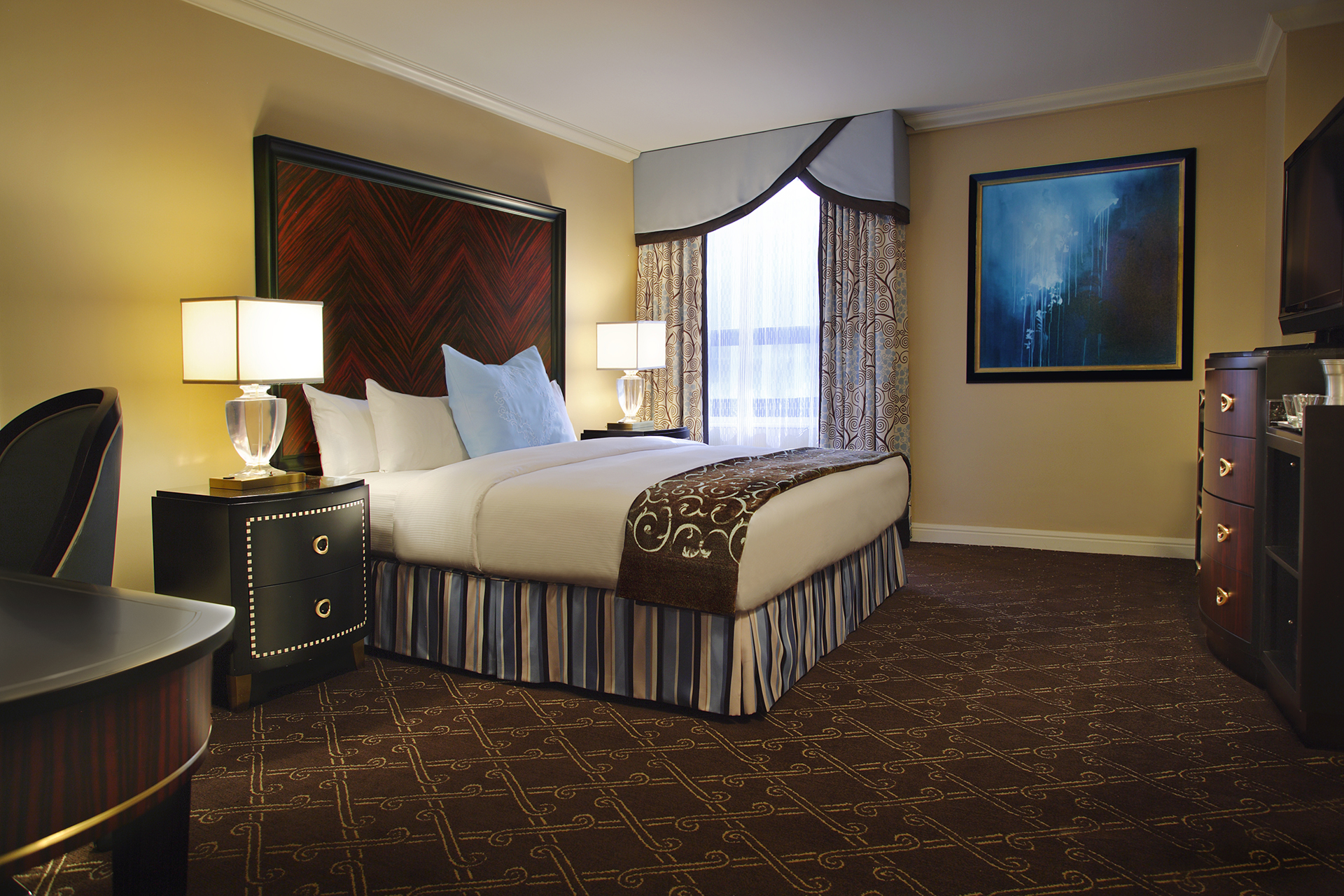 The hotel will also introduce a one-time 150th Anniversary History is Hott & Magic Parlour performance on September 26th. The performance will share the history of the hotel and dynamic personalities of those who shaped it with mind-bending illusion.

All guests checking into the hotel during the opening week will receive a complimentary Brownie Bite at check-in.

Palmer House will also implement Hilton CleanStay protocols to deliver an industry-defining standard of cleanliness and disinfection.  Guests who desire a contactless arrival experience can check in, choose their room, unlock their door with a Digital Key, and check out using their mobile devices through the free Hilton Honors mobile app. This option is available for guests who book directly via the Honors app or at Hilton.com.

4 MIN READ – Hilton Chicago, the historic hotel that first opened its doors in 1927 and one of Chicago’s largest hotels, will reopen to guests and locals on June 10... Learn More