Downtown recovery is off to a strong start for 2022 with office occupancy and pedestrian counts rebounding from a holiday lull. However, the highest recovery rate of pedestrians at 93.5% is due to a comparison to the week of the 2019 polar vortex. Record recovery rates were also recently reported for hotel occupancy from December.

In January, the Chicago Loop saw lighter activity due to the Omicron surge and extreme weather. Still, none of the industry metrics tracked, outside of Metra ridership, saw a decline for the month of January when compared to 2019.

“Despite predictions that the downtown recovery would be stifled by Omicron, Chicago Loop Alliance has seen a consistent maintenance of metrics for key industries like transportation, office, and pedestrian activity,” said Michael Edwards, President and CEO of Chicago Loop Alliance. “This data is bolstered by accounts of office workers beginning their transition back to the workplace, and the continuation of arts, entertainment and attractions from Broadway in Chicago, Maggie Daley Park and the Department of Cultural Affairs and Special Events, and others throughout our district.” 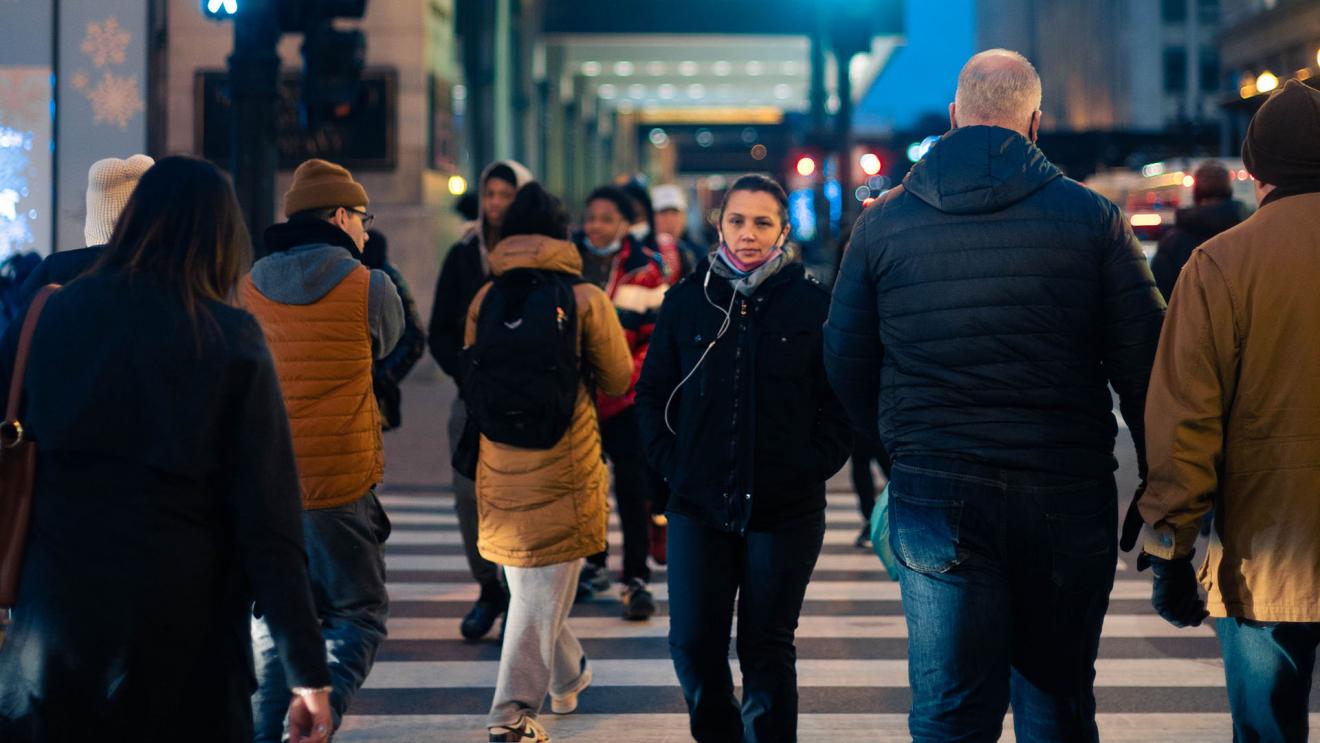 Pedestrian counts on State Street remained strong in January, dipping a marginal 2.3 percent from December’s record monthly average high. However, a recovery rate of 93.5 percent of 2019 levels for January 24 shattered all prior records. This recovery rate reflects the impact of the 2019 polar vortex in which Chicagoans avoided much of downtown. For 2022, January pedestrian counts show a strong indication of continued recovery, with rates nearly doubling the rate set in 2021.

Chicagoans rallied back to the office to start 2022. Office occupancy rates grew by 13.2 percent from their December low, a rate higher than any other major metro area outside of the Dallas, Houston and Austin metro areas. While not the highest occupancy rate measured since the onset of the pandemic’s impact, city offices are twice as full as they were in January 2021.

Parking reservations were stable in January, dropping 7 percent from December as Chicagoland dealt with harsh weather and cautious reopenings of offices and schools. The dip represents the second straight month in which bookings were below 2019 levels. Reservations are still well within the 2019 range, with two weeks in January registering bookings at 94 percent of their 2019 operations.

Loop parking garages noted a 5 percent increase in operations to start the year, improving upon a holiday season when fewer drivers commuted downtown. Even with a lower-than-average January rate, parking garages are operating at two-thirds of the highest recovery rate of 62 percent of 2019 levels reached in the late summer last year. 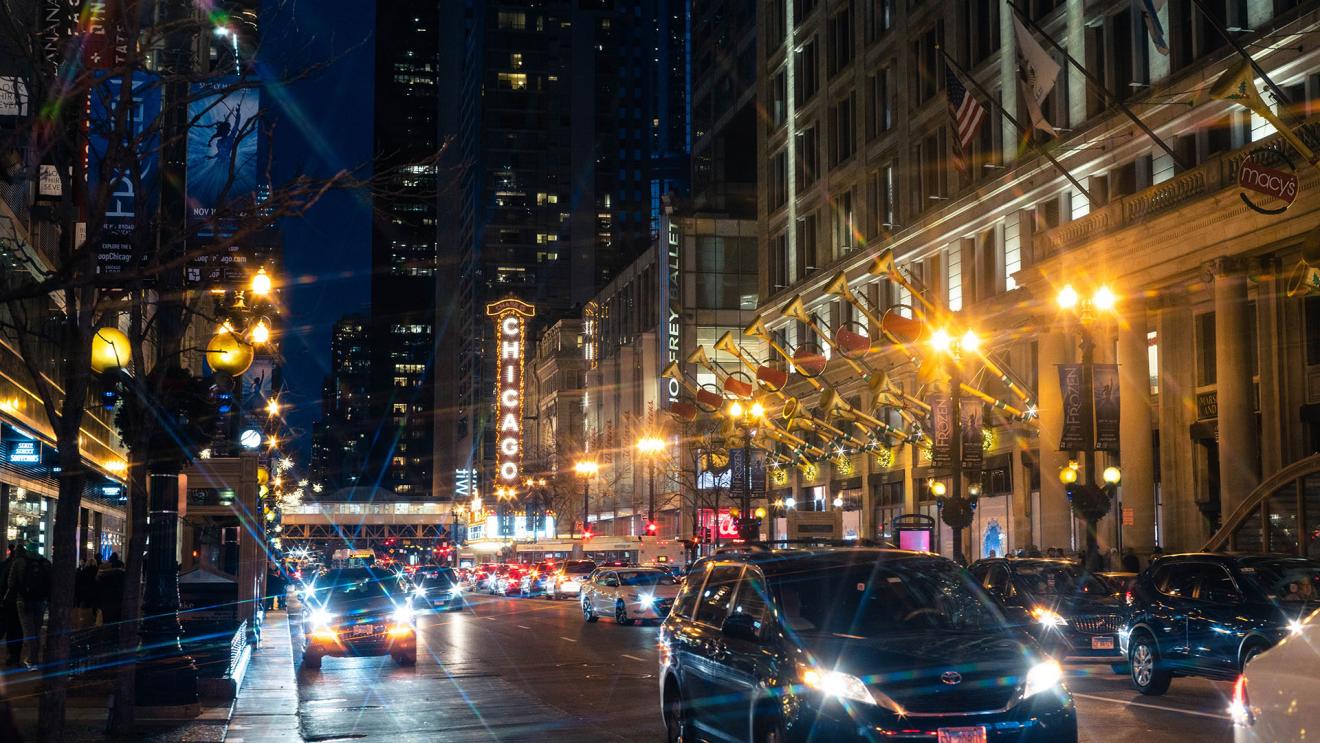 “The hotel industry was heartened by the return of leisure and business travelers for the end of 2021. We have seen an incredibly encouraging uptick in business travel in the past week alone, showing a vital path forward,” said Carey Velasco, Complex W Sales Executive of W Chicago – City Center. “As we see infection rates decreasing and restrictions eased, hospitality and tourism are at the forefront of the recovery, and we anticipate that the excitement of travel will return to the Loop.”

While January’s average ridership rate ended the CTA’s 5-month rally of ridership averages of over 50 percent, the agency reported steady week-over-week increases in ridership for the month.

The ridership rate of 59 percent for the week of January 24 likely reflects the impact of the polar vortex during the comparison week in 2019. Despite this, this rate is 17 percent higher than the similar peak set during the week of January 25, 2021. The January data indicates a steady recovery from the holiday season’s dip in transit use as Chicagoans return to school and the office.

Metra’s ridership metrics in December set milestones for the agency’s 2022 recovery. Despite the holiday season, three of the top ten highest ridership days were in December, averaging 70,700 daily passengers.

The Omicron variant compounded the effect of school closures and remote working that slow travel in January, but Metra ridership for the month is at twice its capacity compared to January 2021.

“Metra’s December ridership remained at similar levels to October and November – about 30 percent of pre-COVID levels – until the holidays and winter breaks began," said Janice R. Thomas, Chief of Staff at Metra. “The recovery to those levels was slowed in January by the rise of the Omicron variant, which affected worker and leisure travel to downtown, but Metra ridership continues to trend upward, and we expect continued positive growth as workers return and restrictions are eased.” 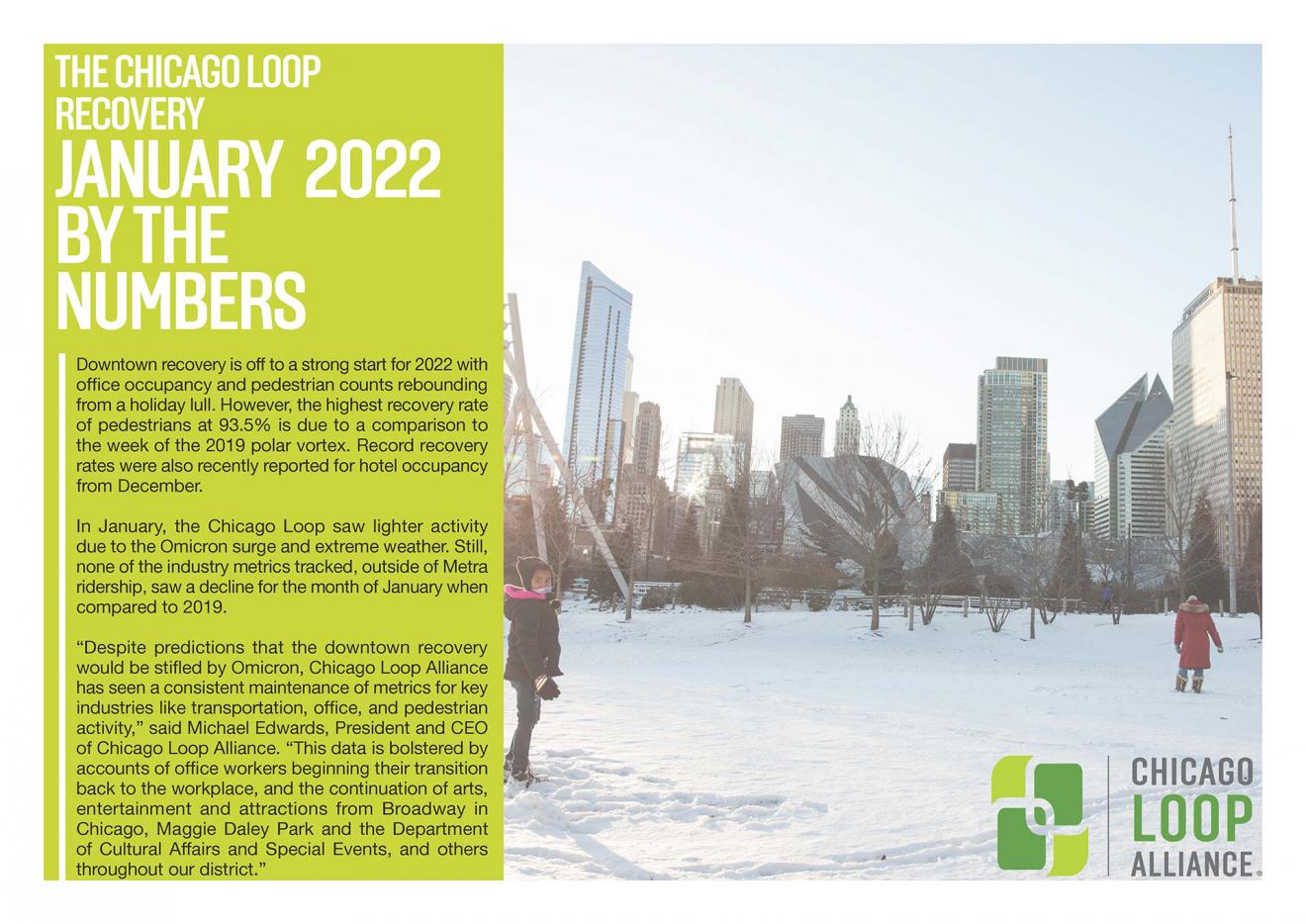 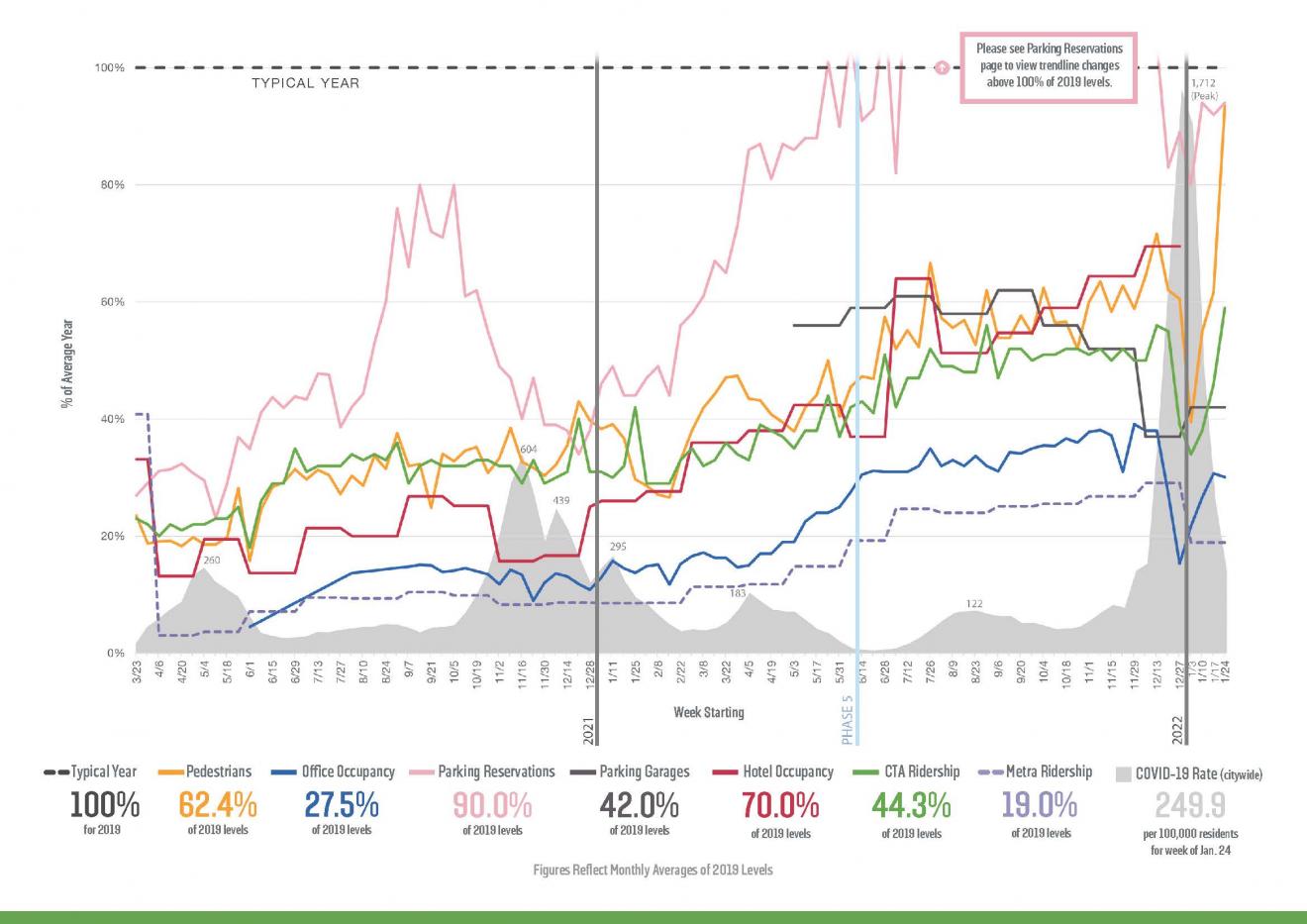 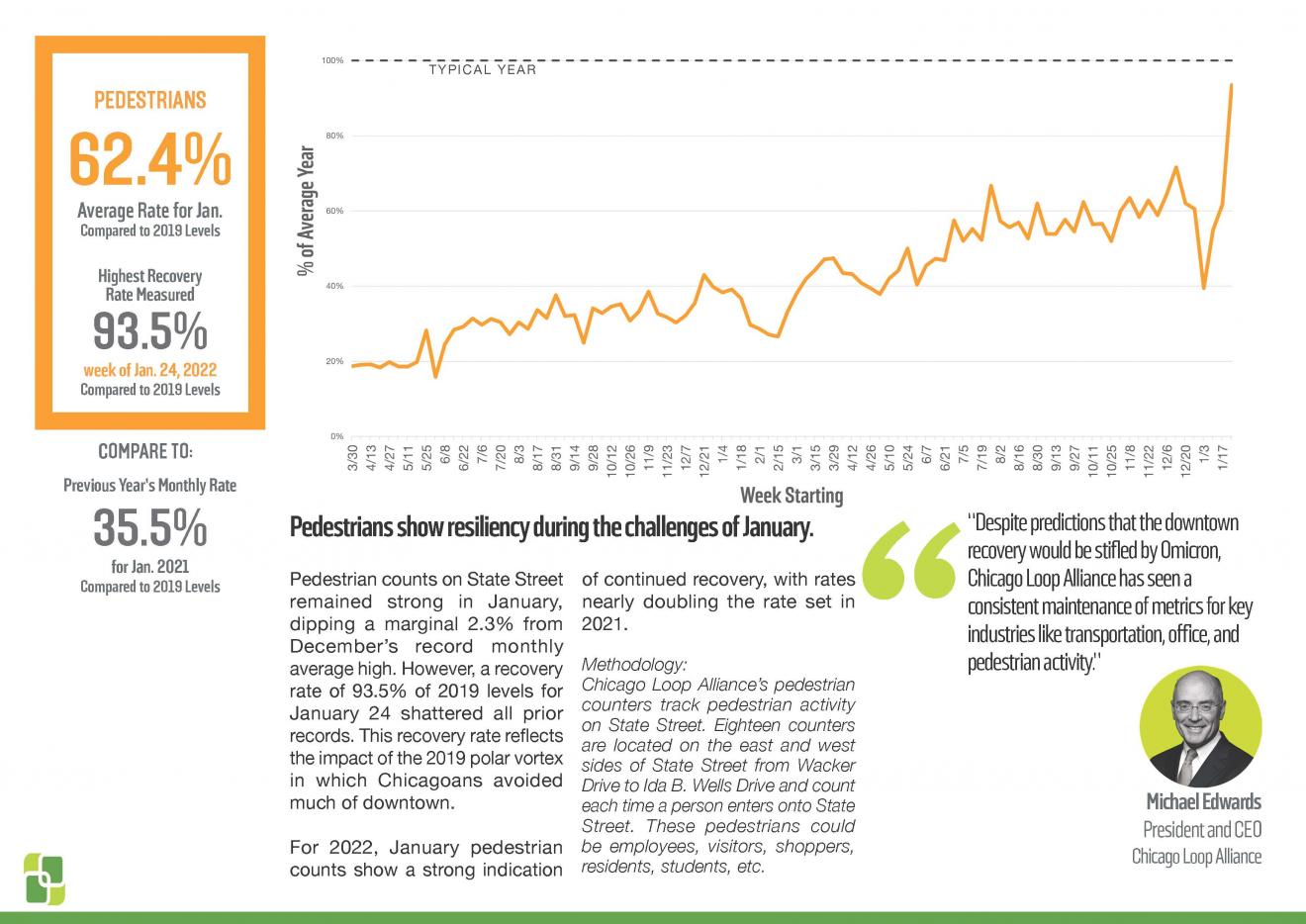 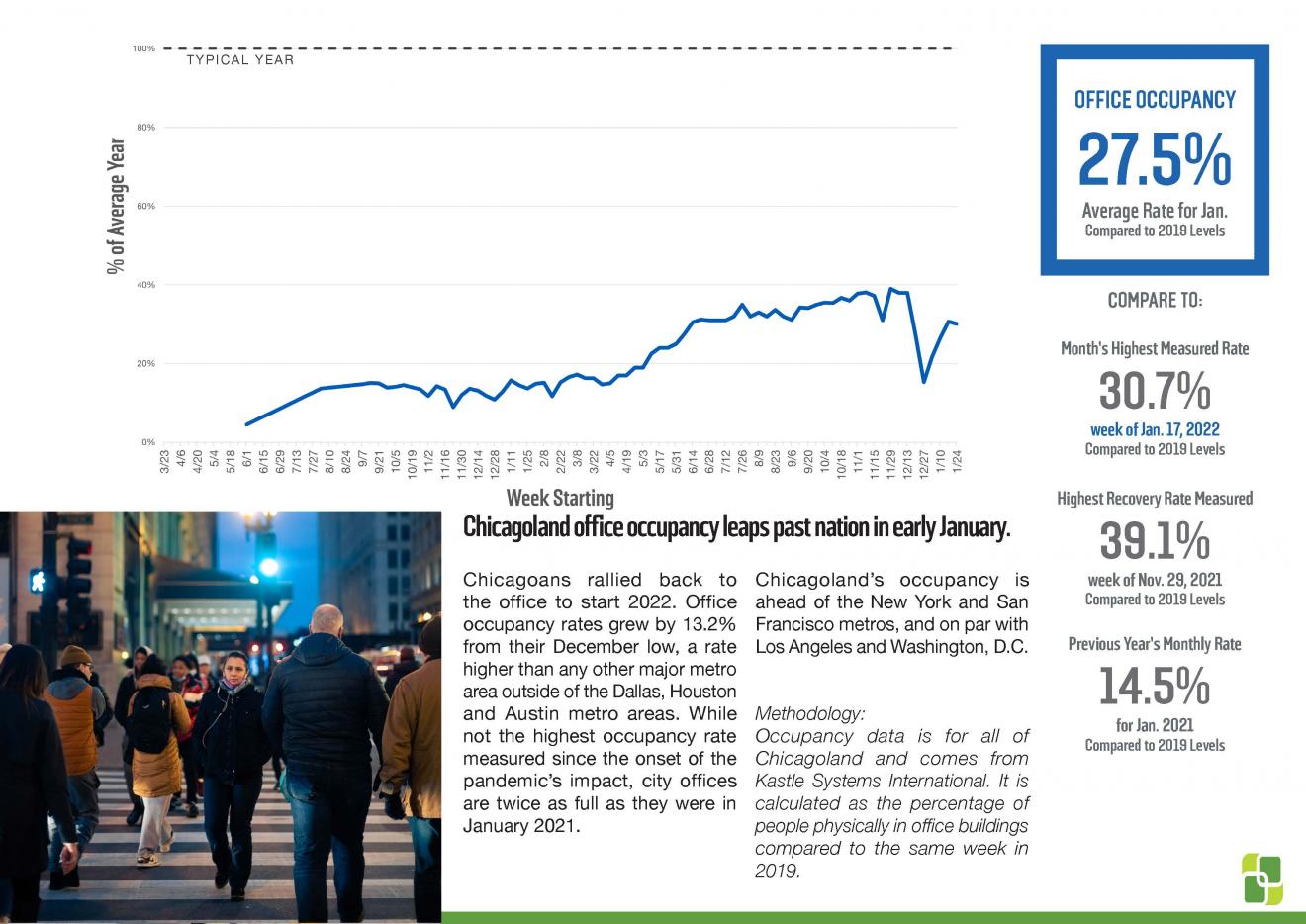 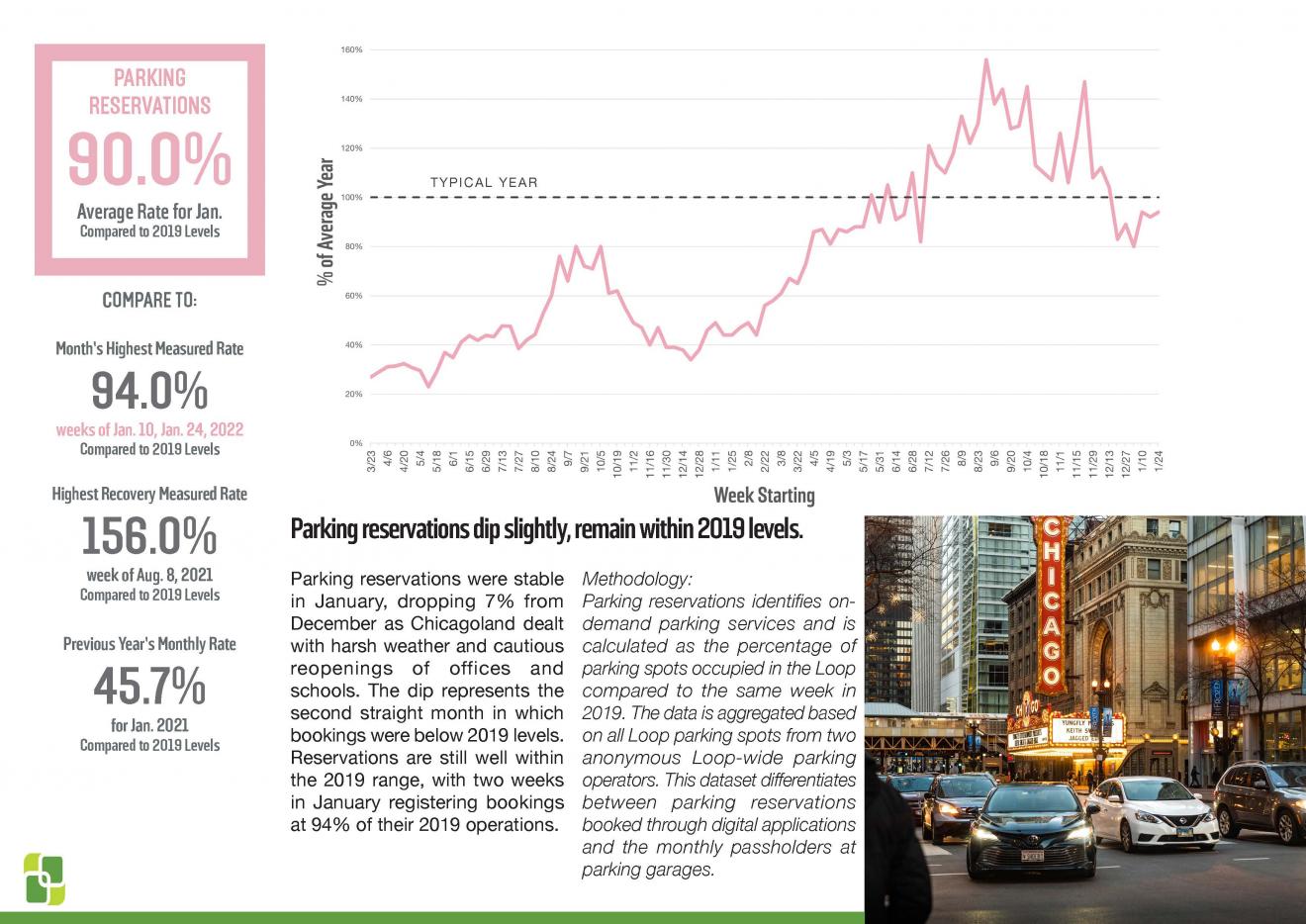 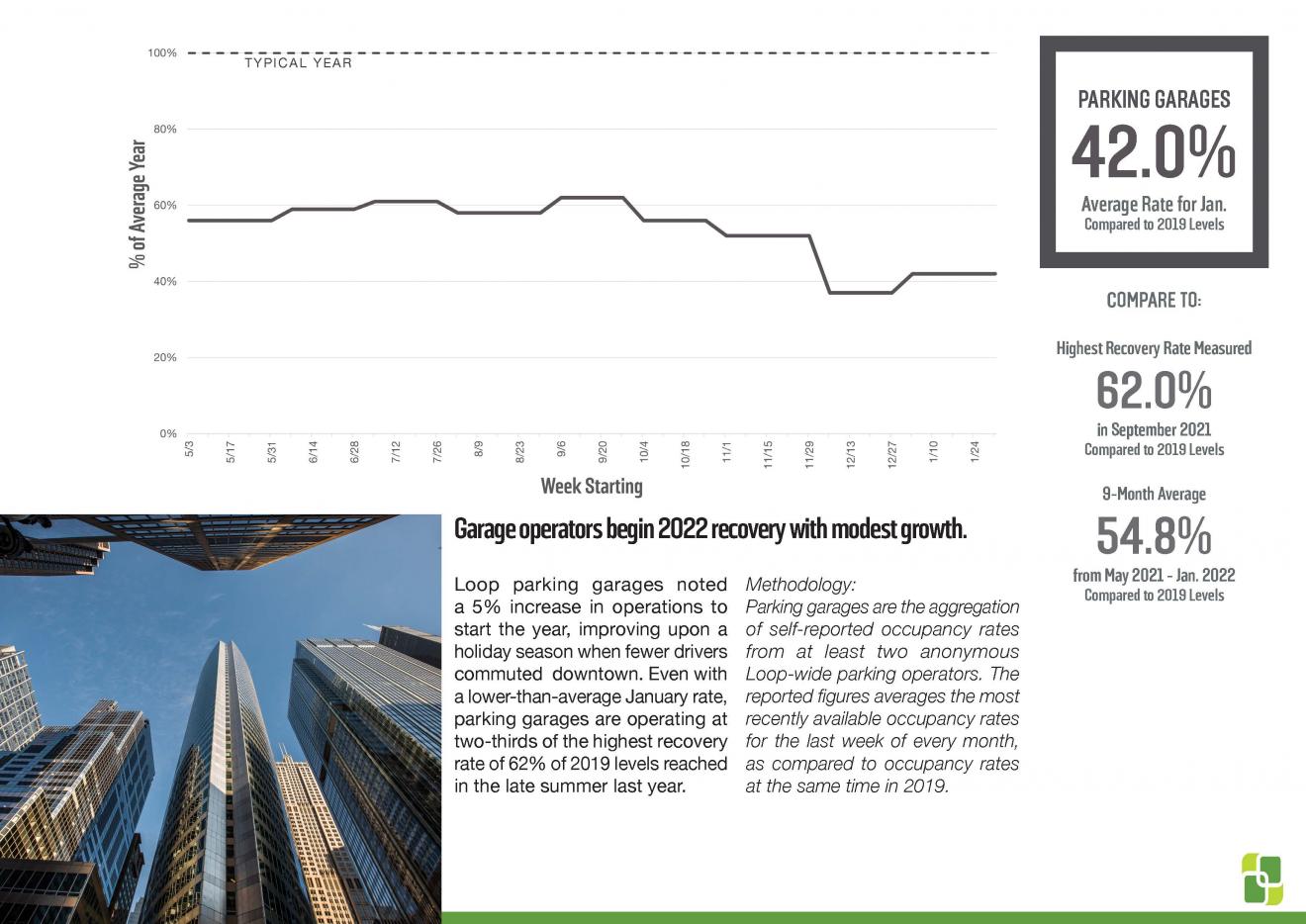 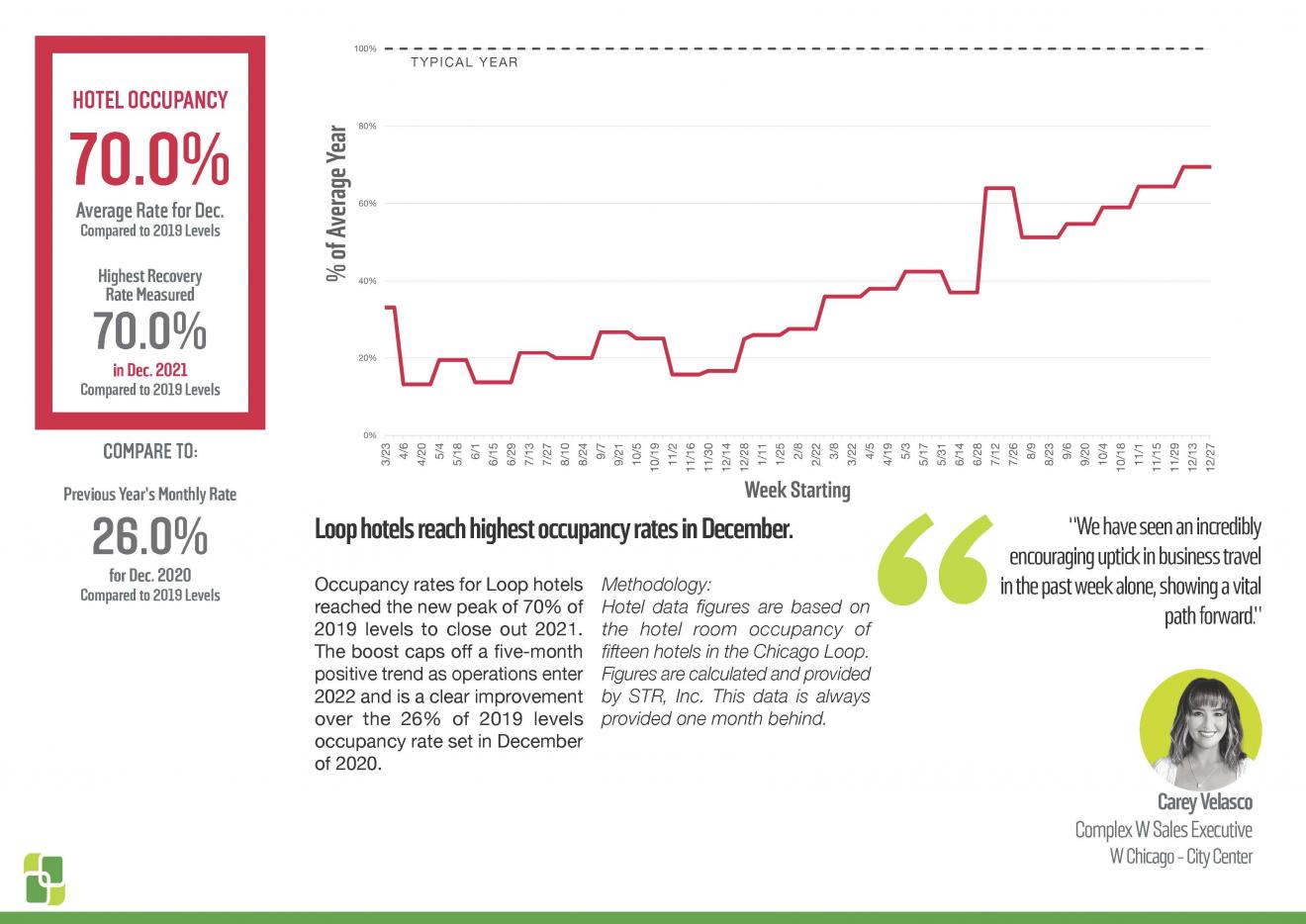 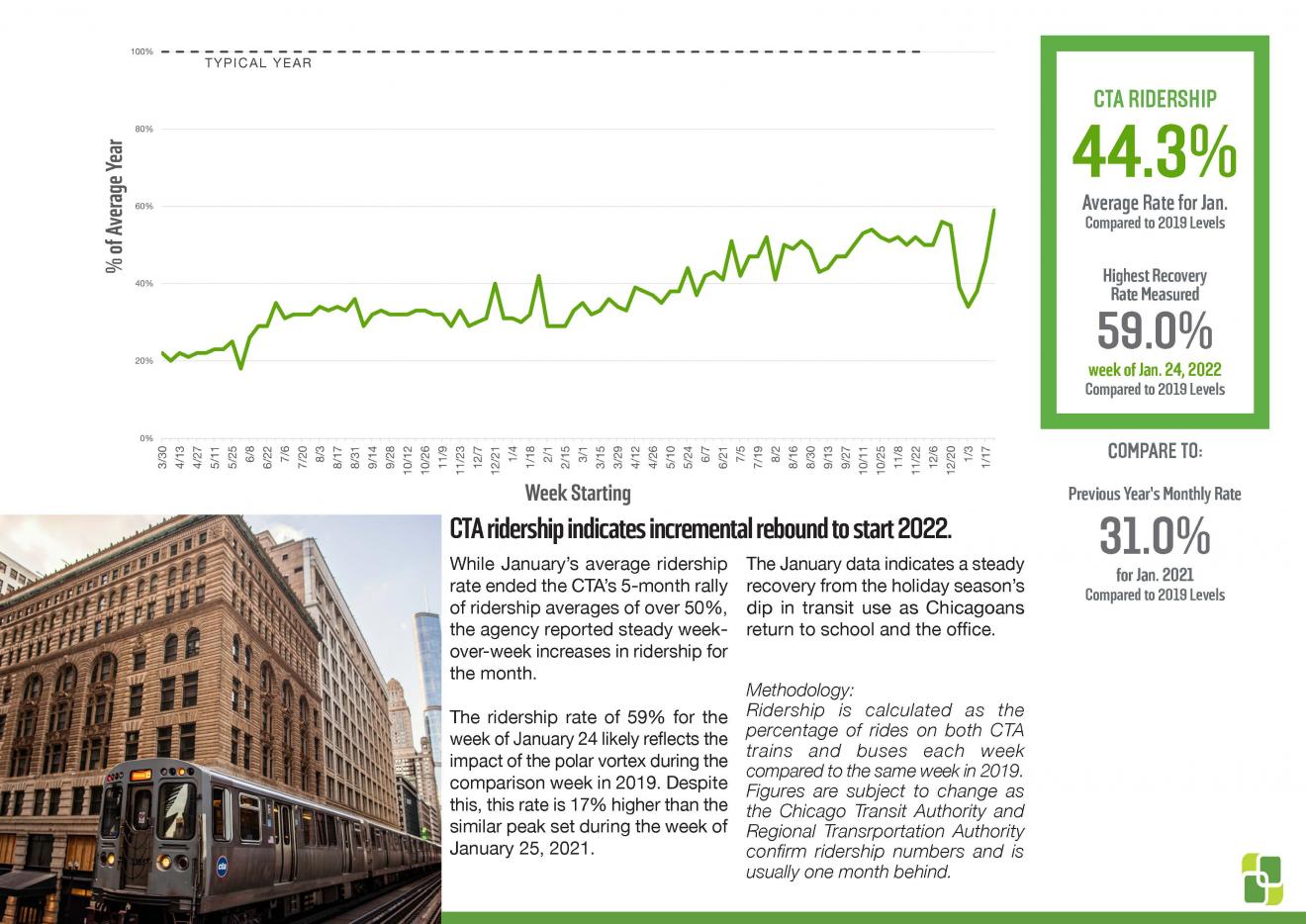 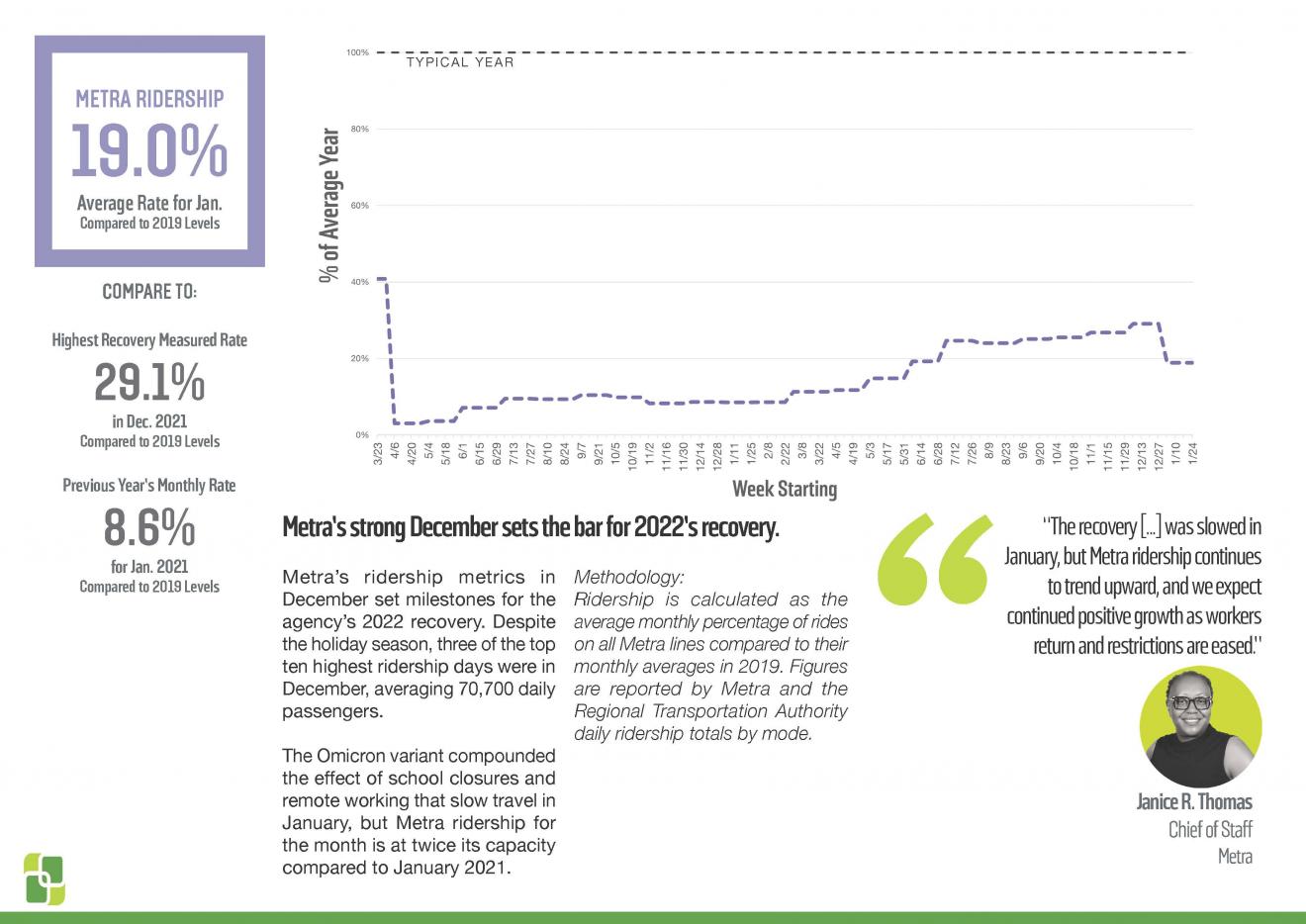 Loop activity rounded out 2021 with record recovery in pedestrians, hotels and offices

4 MIN READ – The Department of Cultural Affairs and Special Events (DCASE) is pleased to announce two new contemporary art exhibits featuring the work of five Chicago artists opening this winter at the Chicago Cultural Center. Learn More
Can't find what you're looking for?
Get travel inspiration, tips and exclusive offers sent straight to your inbox.